A rather pleasant stretch of weather is ahead with low rain chances through the weekend. Meanwhile, we are watching a disturbance in the Gulf, Hurricane Irma and the potential for a significant cold front late next week.

The WBRZ Weather Team prepared a brief story to assess the local impact from Harvey and how our forecast unfolded. In addition, we took some time to thank you along the way. READ MORE here.

Today and Tonight: The week will end in fine fashion with partly sunny skies and high temperatures in the upper 80s. Winds will be much lighter and only an isolated shower is possible during the afternoon, mainly south of I-10. Skies will be mostly clear overnight with low temperatures in the lower 70s.

The Weekend: Saturday and Sunday will carry over similar weather from Friday; this forecast would be considered usual for late summer. Afternoons will be partly sunny with an isolated shower or thunderstorm possible. Rain chances will be slightly higher south of I-10. Overall, daily measurable rain coverage will stay below 20 percent. High temperatures will make a run at 90 degrees although humidity may ratchet down slightly. Low temperatures will be in the low 70s.

Football Forecasts: LSU will kickoff the 2017 campaign against BYU on Saturday in New Orleans after the game was relocated from Houston due to Hurricane Harvey. It will be seasonably warm and humid in the Crescent City with an afternoon high temperature near 90 degrees. Skies will be partly sunny and a pop-up shower or thunderstorm is possible. As fans head inside for the game, evening thermometers will be in the mid 80s with partly cloudy skies. 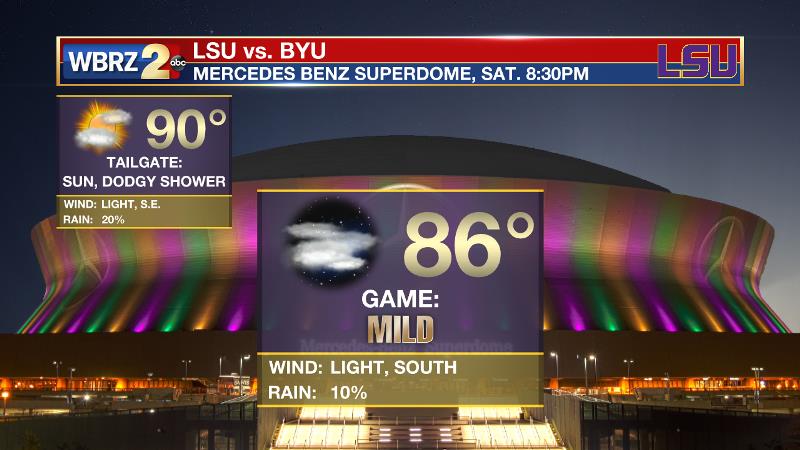 Then, Southern will get their season started Sunday on the Bluff against South Carolina State. The morning hours should be nice for tailgating with lots of sunshine and temperatures in the low 80s. By game time, it will be partly sunny and warmer with an afternoon thermometer near 90 degrees. Though likely dry, we can’t rule out a stray shower. 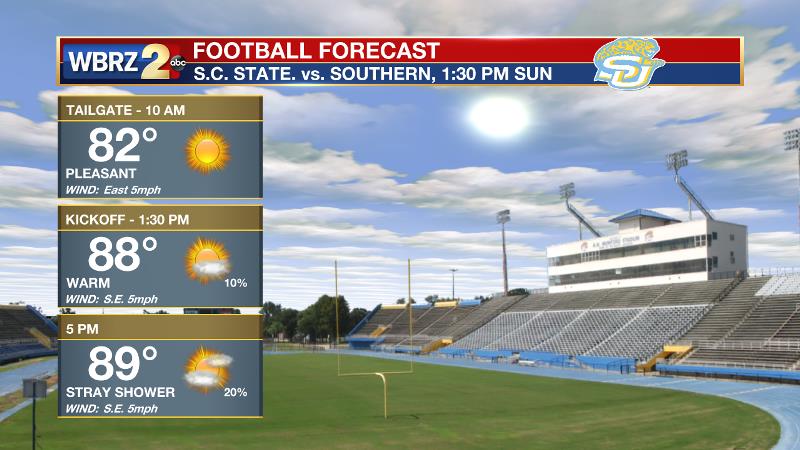 More Rain, Cold Front: Showers and thunderstorms will return to the forecast Monday through Wednesday, possibly influenced by tropical moisture from a weak disturbance in the Gulf of Mexico. It is a little too early to say definitively, but as of now, rain totals do not look problematic. A strong late summer cold front may push through the area toward the middle and end of next week bring considerably cooler temperatures and lower humidity. Blending together temperatures from forecast models, highs in the low 80s and lows in the low 60s seem very possible Thursday through Saturday. That, of course, means humidity will be lower as well. How many early September tailgates can you remember without high heat and humidity? 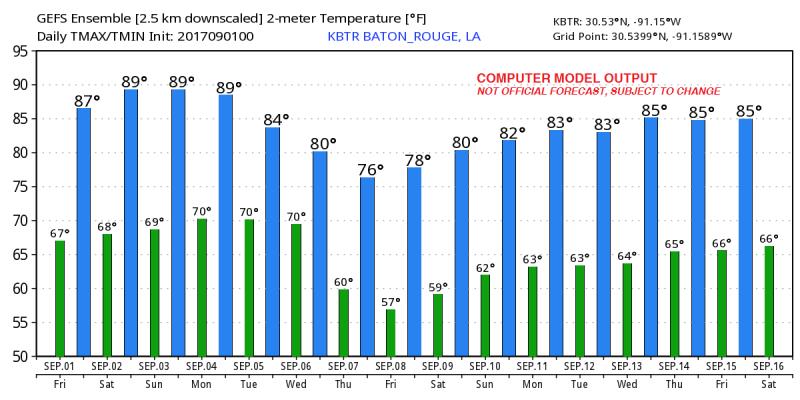 The Tropics: While post-tropical, Harvey continues to wreak havoc on the United States with heavy rain falling in the Mid-Mississippi River Valley. Showers and thunderstorms from the system will spread eastward through the weekend. Elsewhere, a weak disturbance in the southwestern Gulf of Mexico is still being monitored. While considerable organization is not expected, as this area moves northward, it could return rain the local area and even flood stricken parts of the western Gulf Coast. Hurricane Irma is threatening to challenge the peak intensity of Hurricane Harvey. With a minimum central pressure of 997mb and maximum sustained winds of 70, the system was moving west and 12mph. This storm will continue to strengthen in the central Atlantic Ocean, potentially making a landfall in the Leeward Islands. Track and intensity after that remain unclear so the United States must continue to monitor this one very closely. 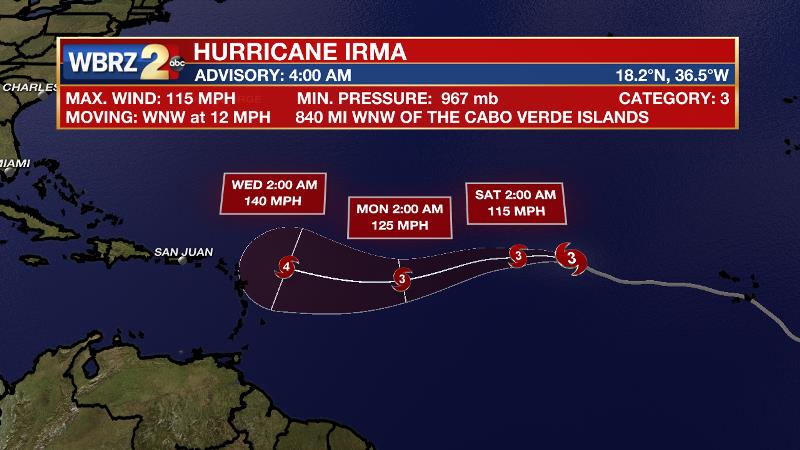 Tying all of this together, the forecast will have to consider how that cold front could interact with the tropical systems. Not only would the Southeast welcome cooler and drier air, but a cold front pushing through the region could potentially deflect any low in the Gulf and Irma away from the United States.