LIVINGSTON- Peaceful protesters gathered Tuesday evening in Denham Springs to march in honor of George Floyd, the man who recently died at the hands of Minneapolis law enforcement.

The march began at 6 p.m. at the L.M. Lockhart Center, located at 320 Martin Luther King Drive. The march continued on Eugene Street, traveled down Range Avenue to I-12, then returned to the Lockhart Center.

A police escort has accompanied the protesters throughout the rally, working together to keep everyone safe.

One family could not participate, but donated pizza, water, and popsicles to the cause, along with posters made by little ones.

A hot pink handmade sign read, "In the South, we feed people we love. Everybody have a slice." 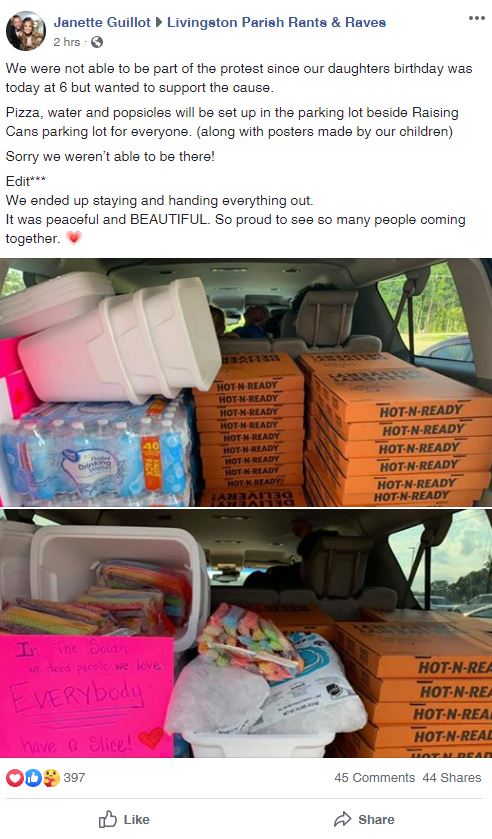 The community came together and embraced one another peacefully, spreading the word that violence would not be tolerated.

One local, Ryan Thames, captured the march from a bird's-eye view.

The march is being held to protest what Gov. John Bel Edwards described as the "egregious" death of Floyd, which occurred May 25. The death was recorded by bystanders and in the videos, Floyd can be heard saying, "I can't breathe," and calling out for his mother before he passes with an officer's knee pressed against his neck.

Three other officers stood by, and since the incident, all four Minneapolis officers have been fired. Derek Chauvin, the officer who used his knee to hold Floyd down, was arrested and charged with third-degree murder and second-degree manslaughter.

The death of George Floyd sparked dozens of protests across the nation.

In Louisiana, protests began in Baton Rouge and New Orleans over the weekend and continued into the week.