There is an increasing possibility that a tropical system, be it a depression or named storm, will form in the northwestern Gulf of Mexico. However, any impact to the local area will be minor.

The Next 24 Hours: The nighttime hours will be partly cloudy and muggy. Low temperatures will stay the course and bottom out in the mid 70s. Thursday, enough moisture will load the atmosphere for a more widespread crop of showers and thunderstorms to develop—all of this related to the tropical system in the central Gulf. Still the marine breezes and some daytime warming will likely be needed to initiate action. High temperatures may sneak into the upper 80s before showers and thunderstorms begin.

The Long Term Trend: We are making substantial changes to the extended forecast in the form of higher rain chances. Friday still appears to be the most active of the 7-Day Forecast with regard to showers and thunderstorms. The tropical system in the Gulf and associated moisture will keep widespread coverage of showers and thunderstorms in area. Even after this, some lingering “energy” will keep rain coverage elevated to scattered or widespread through early next week. Through Sunday, rainfall amounts will total 1 to 3 inches with some isolated higher amounts. Of course, those locations that experience multiple storm downpours could have some street and poor drainage flooding. The system will not produce any serious wind inland outside of thunderstorm gusts.

However, on the shorelines, persistent southeasterly winds of 15-25mph will send tides 1-2 feet above average, so a COASTAL FLOOD ADVISORY has been issued through Friday. The added rain may also keep high temperatures out of the 90s on several afternoons. Finally, one possible “fly in the ointment” is Tropical Storm Gonzalo. We only mention that so not to write it off, but there are no forecast models that suggest a threat to our area.

The Tropics: Recent observations indicate that a broad area of low pressure has formed in association with the tropical wave over the central Gulf of Mexico. However, the accompanying shower and thunderstorm activity has struggled to organize. Conditions are conducive for some gradual development, and a tropical depression may form Thursday or Friday as the system moves west- northwestward at about 10 mph. An Air Force Reserve Hurricane Hunter aircraft is scheduled to investigate the system. 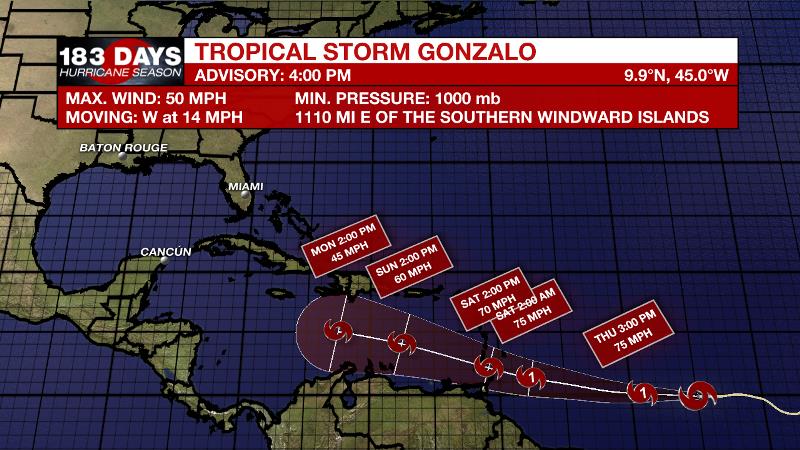 Further east, Tropical Storm Gonzalo was 1,100 miles east of the Windward Islands with maximum sustained winds of 50mph. As of 4pm Wednesday, the storm was moving west at 15mph and will continue on that trajectory over the next few days. The very small system, with tropical storm force winds only extending 25 miles from center, will likely become a hurricane on Thursday.

The Explanation: The primary feature of interest to end the week will be a tropical low in the central Gulf of Mexico. While some development is possible, the greatest impacts from it will be over coastal and offshore areas. These locations could experience winds of 15-20mph and tides 1-2 feet above normal. Inland, as atmospheric moisture gradually increases on Thursday, measurable rain coverage will tick up from scattered to widespread. Still, since the low will be well south of the area, it will take daytime warming and marine breezes to kick out showers and thunderstorms so most of the activity will occur around and after midday. Added cloud cover and precipitation in the area may hold down high temperatures. No major changes to dew point temperatures in the low to mid 70s will keep low temperatures in that range. By Saturday, the tropical system will push away to the southwest but, in a significant change, forecast models now indicate a persistent trough of low pressure aloft leading to cooler, more unstable air. This will likely keep scattered to widespread showers and thunderstorms in the picture well into next week.