Wednesday AM Forecast: Sneaky showers could produce some heavy downpours across the Capital Area

Today & Tonight: It is a rinse and repeat kind of pattern this week. Waking up to leftover moisture and clouds in our area. Deep layer moisture in our atmosphere will allow for the clouds and showers to stick around again today. Temperatures will top out in the low-90s across the area. Shower and thunderstorms will be moving in right on time. Expect to start seeing rain around 1 PM until the evening hours. We do have a marginal risk for excessive rainfall, this just means that some of the storms that develop could have heavy downpours and cause some street or poor drainage flooding. Overnight temperatures will fall into the low-70s.

Up Next: Thursday morning the pattern repeats. Temperatures waking up in the mid-70s and feeling sticky. Clouds will hang around the area preventing our temperatures from warming past the low-90s. Showers and thunderstorms will be sneaking into the area. Some of these storms could produce heavy downpours, frequent lightning, and gusty winds. Slow-moving showers could produce heavy amounts of rainfall that could cause some potential street or poor drainage flooding. The marginal risk for excessive rainfall will be in effect for our area until Friday. Seasonable temperatures and afternoon showers will stick around into the 4th of July weekend.

Hour-by-hour weather tracking is available for your location on the WBRZ WX App on your Apple or Android device. Follow WBRZ Weather on Facebook and Twitter for even more weather updates and unique weather insight from the whole team.

Potential Tropical Cyclone 2 is bringing the threat of heavy rain and tropical storm force winds to with Windward Islands and neighboring nations in the southeaster Caribbean. This storm is not a threat to the local area. 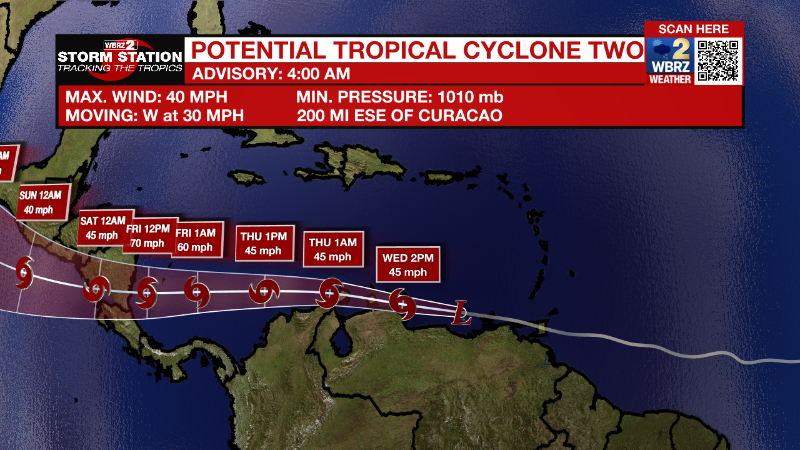 There is a tropical disturbance in the Gulf of Mexico that is promoting extra rainfall this week. Its development chances are still rather low, and it is tracking away from the local areas, headed toward the Texas coast. 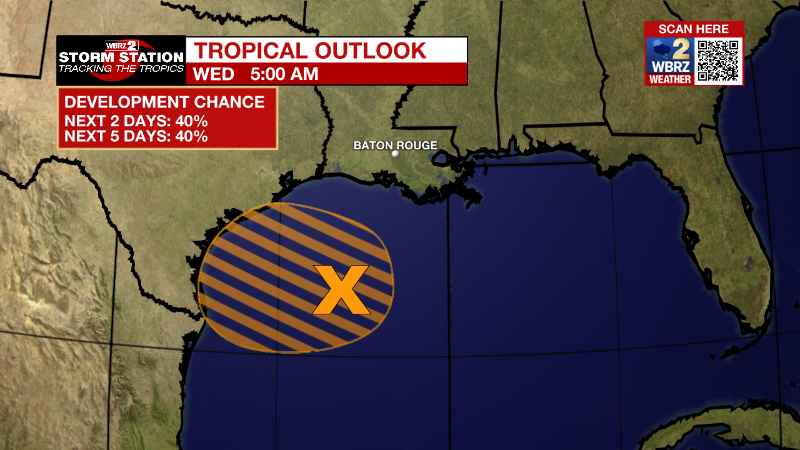 Northern Gulf of Mexico:
An area of low pressure centered over the northwestern Gulf of
Mexico continues to produce disorganized showers and thunderstorms.
This system is forecast to move slowly westward or west-
southwestward and approach the coast of Texas during the next day or
two. Slow development of the low is possible, and it could become a
short-lived tropical depression near the coast before it moves
inland tonight or Thursday. Regardless of development, heavy rain
will be possible along portions of the Texas coast later this week.
For more information about the potential for heavy rain, please see
products issued by your National Weather Service office.
* Formation chance through 48 hours...medium...40 percent.
* Formation chance through 5 days...medium...40 percent. 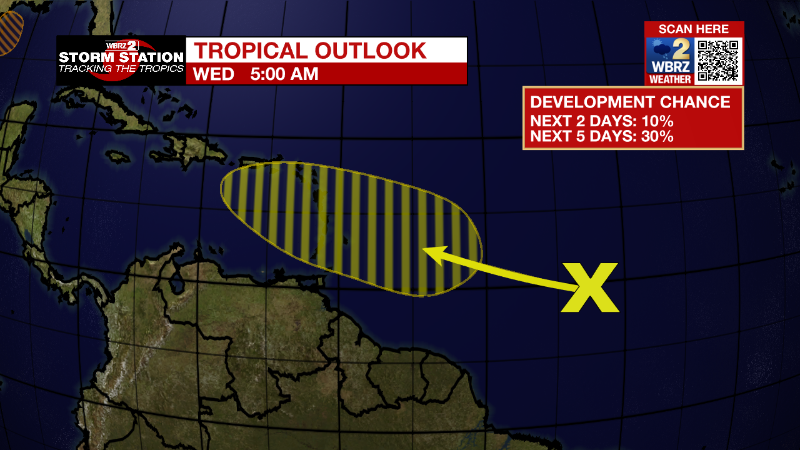 Central Tropical Atlantic:
A tropical wave located over the central tropical Atlantic is
producing disorganized showers and a few thunderstorms. This system
is forecast to interact with another tropical wave over the next
couple of days, and some gradual development is possible later this
week. The overall system is forecast to be near the Windward
islands by the weekend while it moves west-northwestward at about
15 mph.
* Formation chance through 48 hours...low...10 percent.
* Formation chance through 5 days...low...30 percent.