The forecast track of Tropical Storm Harvey continues to shift. As the storm meanders in eastern Texas and weakens, flash flooding and river flooding are becoming less likely across southeast Louisiana and southwest Mississippi.

Tropical Storm Harvey has become stationary near Houston, Texas.  Catastrophic flooding is currently underway as over 2 feet of rain has occurred in several locations with more heavy rain still to come. However, little to no organized precipitation has strayed into the Baton Rouge area.

Forecast models show that the remnants of Harvey will continue to drift across southeast Texas before eventually lifting northward, west of the Texas/Louisiana border by Friday. The National Hurricane Center and the WBRZ Weather Team are in agreement with this forecast. This track should mean that while heavy rain is still possible at times this week, it should not be constant and the flooding threat is reduced. Much like with typical summer storms though, isolated downpours may create some localized flooding and ponding of water. 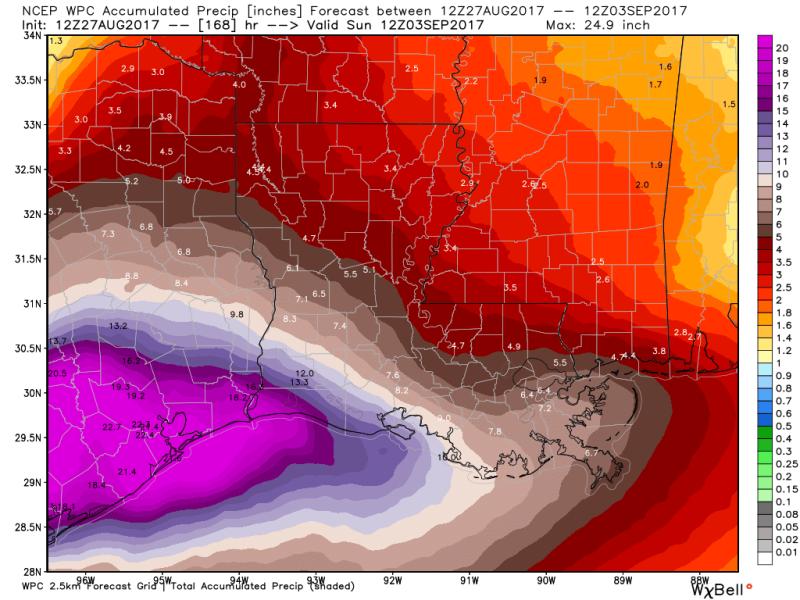 Narrow bands of tropical showers and thunderstorms are expected to develop over the next several days. Total rainfall of 3 to 6 inches is expected by next weekend.  The lowest will occur north of I-12, over southwest Mississippi and the neighboring Louisiana parishes. The highest amounts will be southwest of Baton Rouge over the Atchafalaya Basin. Some isolated totals near 10 inches will be possible in St. Mary and Assumption Parishes.  Given these totals spread over several days, local bayous, rivers and streams should be able to handle that capacity without any flooding.

Since this remains an unusual storm, closely monitor the forecast this week. Plan to get frequent updates from the WBRZ Weather Team on News 2, wbrz.com, Facebook, Twitter and the WBRZ WX App. on Apple and Android devices. As always during hurricane season, stay prepared and review plans.