Tuesday PM Forecast: warming and awaiting the next cold front

Next 24 Hours: Cirrus clouds will continue to spill across skies overnight as low temperatures stop around 60 degrees. Sunshine may be partially blocked by some mid and high level clouds on Wednesday. Afternoon high temperatures will make it into the mid 80s with calm winds.

Up Next: For the rest of the week, skies will be mostly clear. With no major features to alter the weather, high and low temperatures will gain a degree or two each day. By Friday, lows will be in the mid 60s and highs will be in the upper 80s. One or two spots could hit 90 degrees. A cold front will sag south through the area on Saturday morning. That system is likely to pass without rain; and it will be followed by a sunny and mild afternoon. Overnight temperatures will return to the 50s Saturday and Sunday nights. CLICK HERE for your detailed 7-Day Forecast. 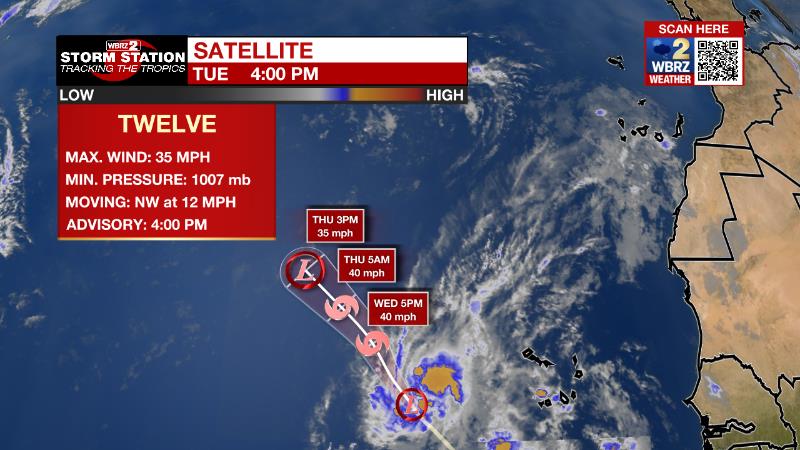 The Tropics: Tropical Depression 12 formed west of the Cabo Verde Islands Tuesday afternoon. Maximum winds were at 35mph and some minimal strengthening to tropical storm force is expected as it moves off to the northwest at 12mph. The system will dissipate before the weekend. 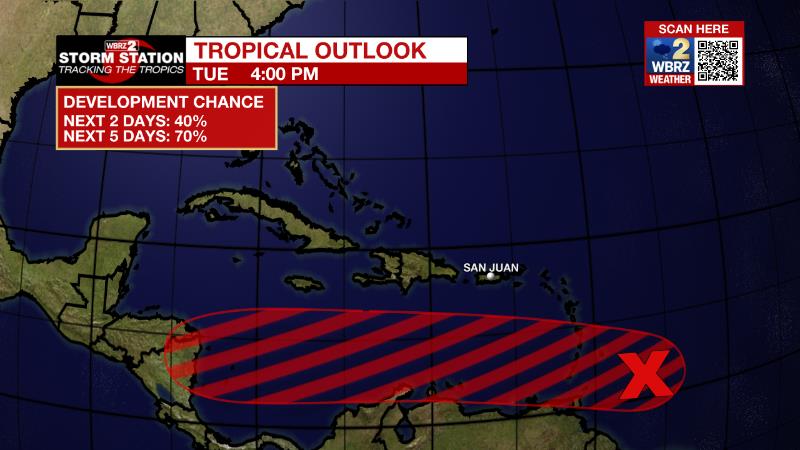 A broad area of low pressure located a couple of hundred miles east of the southern Windward Islands is producing an area of showers and thunderstorms to the southeast of an ill-defined center. Upper-level winds are likely to become more conducive for development, and there is a seventy percent chance that a tropical depression could form during the next couple of days, if the system stays far enough away from land while moving westward at about 15 mph across the Windward Islands and southeastern Caribbean Sea. Conditions appear to become more conducive for development later this week when the system reaches the central and western Caribbean Sea. Regardless of development, locally heavy rainfall and gusty winds are expected over portions of the Windward Islands tonight and Wednesday. Interests in the Windward Islands, the ABC Islands, and the northern coast of Venezuela should monitor the progress of this system. An Air Force Reserve Hurricane Hunter aircraft is currently investigating this system.

The Explanation: A very dry air mass continues to reside over the region. Overall, the pattern will not change much through the short-term period. With essentially zonal (west to east) flow in the upper levels, benign weather will continue. Occasional pockets of mid to upper level moisture could result in some passing cirrus clouds. During the middle and end of the week, the upper levels may warm just a bit translating to slightly higher afternoon temperatures. An upper level trough deepening over the Northeast U.S. will send a weak cold front into the Southeast at the start of the weekend. Without quality moisture due to lack of a low level return flow, the frontal passage should remain dry. As for temperatures, temperatures look to remain in the middle 80s during the day, however, overnight lows should begin to drop into the 50s again by next weekend.