Rain has returned and will stay for a while. Downpours and even a strong thunderstorm or two will be possible on Thursday.

Next 24 Hours: Cloudy and showery weather will continue overnight. Southeast winds of 10-15mph will hold low temperatures in the upper 50s and low 60s. In between the warm front that passed on Tuesday and a cold front expected on Thursday, Wednesday will stay mostly cloudy with just a few showers possible—not a washout. Afternoon high temperatures will climb into the low 70s, especially in areas the see a few breaks of sunshine.

Up Next: More impactful weather will arrive on Thursday. A slow-moving cold front will push into the area and it will deliver a bout of rain and thunderstorms. The threat for severe weather is low, but not zero. Since the front will not be moving quickly, heavy rain is a more likely issue. Up to two or three inches could fall. While major flooding is not a concern, some standing water and poor drainage issues could arise anywhere those amounts occur in just a few hours. Additionally, both commutes on Thursday could be difficult due to the steady rain. By Friday morning, the front will start to edge east of the area, showers will slowly end from west to east and colder air will arrive with high temperatures stuck in the 40s. Some returning sunshine will help weekend highs back into the 50s. CLICK HERE for your detailed 7-Day Forecast. 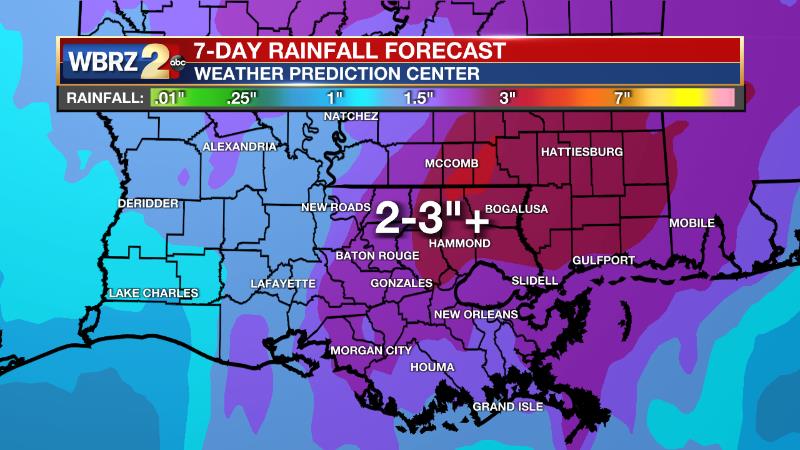 The Explanation: A strong cold front will sag southeastward into the region on Wednesday. Due to lack of a focal point for development, scattered showers are the primary expectation into Wednesday evening. As the cold front presses in on Thursday, rain and thunderstorms will easily develop thanks to moderate instability and dew point temperatures in the mid 60s. The cold front will drastically slow down across the local area as it moves beneath upper level winds out of the southwest—therefore parallel to the front itself. As a result, there is at least some potential for flash flooding. Atmospheric moisture should be approaching record levels for the time of year. While that can be a signal for heavy rain, the National Weather Service notes that wintertime record moisture does not always lead to record rainfall. Still, an event total of two to three inches could be a healthy soak for the area as long as it comes in a day or two and not an hour or two. There is a 1/5 marginal risk for severe weather but this is a conditional threat that looks less likely at this time. Showers may linger into Friday as southwest winds aloft continue to roll over the slow moving cold front. Much lower temperatures will settle in behind the boundary and much of Friday will be in the upper 30s and low 40s. Several forecast models are portending a period of sleet before precipitation ends. While this cannot be ruled out as a possibility, temperatures are expected to stay well above freezing, precluding any impacts. If clouds fail to clear before nightfall, it could be the mid 40s. A surface high pressure system to the north will cause continued northeast winds and therefore cool temperatures over the weekend. Even with some sunshine, Saturday and Sunday will remain in the 50s. Previously, forecast models had taken an upper level disturbance across the local area on Sunday for a quick shot at showers. However, the newer guidance is suggesting that feature will mature east of the local area which means a drier forecast.