Tuesday AM Forecast: Summertime showers popping in right on time

Afternoon showers will be holding our temperatures in the low 90s.

Today & Tonight: More moisture will be sticking around. As we continue throughout the day, the clouds and humidity will be staying in place. This will keep temperatures near 90° for our daytime high. Expect the afternoon showers. They will be similar to what we have seen the past two days, but they will not be as widespread. Localized heavy downpours and gusty winds are possible as these storms and thunderstorms roll through. As the sun begins to set, showers will begin to fizzle out, and temperatures will drop into the mid-70s.

Up Next: The wet pattern continues. Wednesday morning we will be waking up to more clouds and muggy conditions across the area. Partly sunny skies will only allow for temperatures to heat into the low-90s. Scattered showers will be sneaking in during your afternoon commute. Temperatures will cool into the mid-70s overnight. Clouds and some showers will linger overnight. Wednesday the pattern continues. We are getting into a more summertime-like pattern where temperatures stay in the low-90s and cool-down showers move through during the afternoon hours.

Potential Tropical Cyclone 2 has formed about 720 miles east of Trinidad. PTC 2 is forecast to become a tropical storm today, and become the first hurricane of the season by late this week. 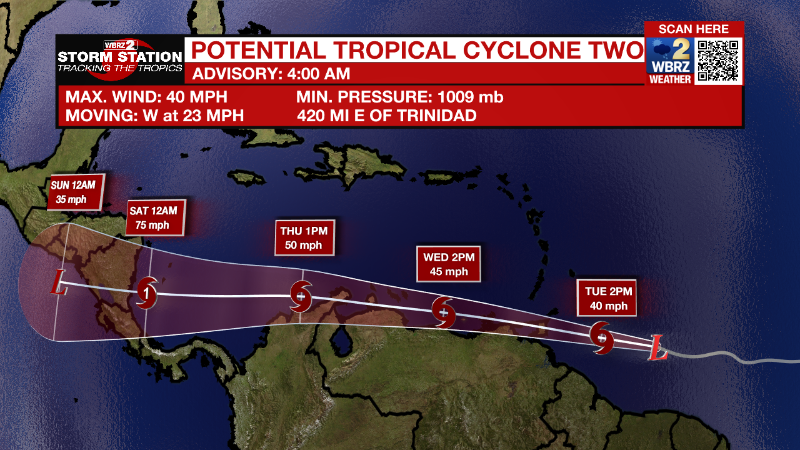 This system has been given the “potential tropical cyclone” name because its center is not yet completely organized, but the government of Trinidad and Tobago has issued a Tropical Storm Warning for Trinidad, Tobago, and Grenada and its dependencies. If/when this system organizes into a tropical storm, it will pick up the B name on the list, Bonnie.

There are two other disturbances to watch. A disturbance in the Atlantic are going to travel west into the Caribbean but is unlikely to enter the Gulf. At this time, it is not expected to impact the local forecast. The other disturbance is going to contribute to a little extra rain this week. It is unlikely to develop into an organized tropical system, but we will see impacts in terms of rain in the next 5-7 days. A manageable 1-3 inches of rain is expected over the next week. We will be monitoring the risk for locally heavy rainfall. 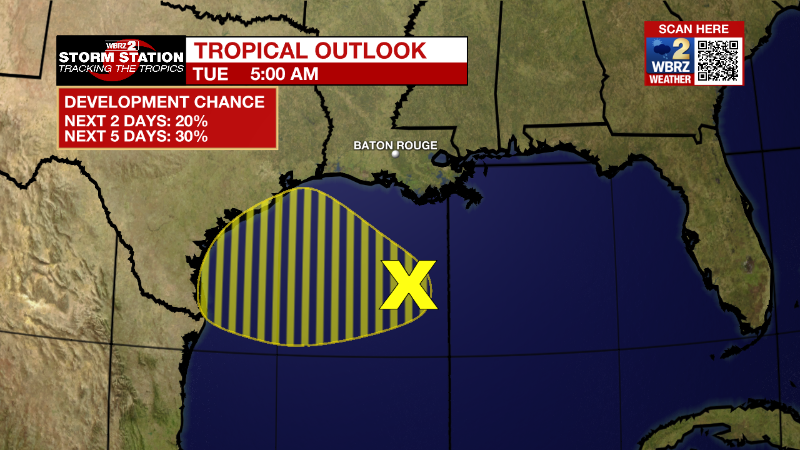 Northern Gulf of Mexico:
A surface trough of low pressure is located over the north-central
Gulf of Mexico. While shower and thunderstorm activity with this
system is currently limited, surface pressures have fallen
some over the last 24 hours. Some additional development of this
system is possible as it moves generally westward at 5-10 mph and
approaches the coast of Texas during the next few days.
* Formation chance through 48 hours...low...20 percent.
* Formation chance through 5 days...low...30 percent. 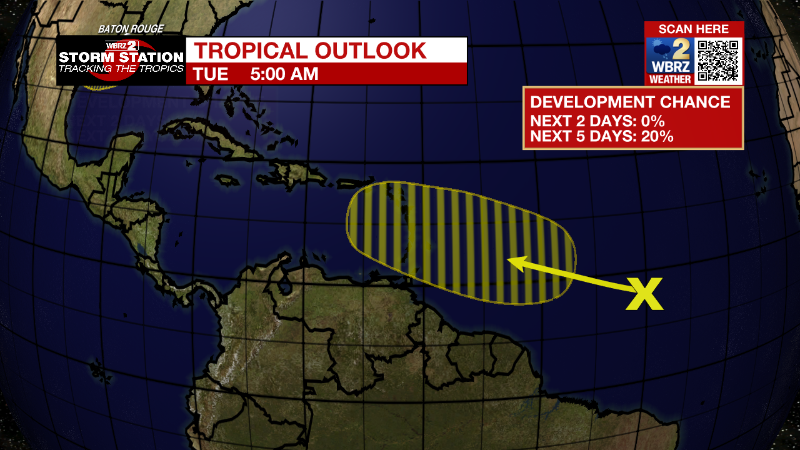 Central Tropical Atlantic:
A tropical wave located about 1200 miles east of the Windward
Islands is producing disorganized showers and thunderstorms. This
system is forecast to interact with another tropical wave to its
east over the next several days, and some gradual development is
possible later this week while the overall system moves west-
northwestward at around 15 mph across the central tropical Atlantic.
* Formation chance through 48 hours...low...near 0 percent.
* Formation chance through 5 days...low...20 percent.