Sunshine and steamy temperatures this Sunday, but cooler drier weather for the rest of the week.

Tonight & Tomorrow: Last day of the summertime like pattern in the forecast. Temperatures this afternoon tying the 93° record set in 2016. Some light wispy cirrus clouds in the area but dense cloud cover and showers stayed away. As we head into the overnight hours temperatures will fall back into the low-70s. Monday morning we are going to be watching the cold front move through the area. Starting your day still a little muggy but once the northerly winds set into the area by the afternoon hours we will start to see and feel the changes. Daytime highs tomorrow top out in the low-90s. Some cloud cover will still be hanging around but for the most part by the afternoon hours we will see clear conditions across the Capital Area. Overnight temperatures will dip into the 60s and we will wake up Tuesday morning finally feeling like fall.

Up Next: By Tuesday morning, we will be seeing northerly cooler drier air move into the area. Waking up with temperatures in the low-60s, plenty of blue skies to start the day. Clear skies stick around all day long, and temperatures on the cooler side. Daytime highs this week will be in the low-to-mid 80s. You can expect much less humidity starting Tuesday and into the rest of the work week. Starting your day with crisp cool mornings with a little bit of warmth by the afternoon hours. Now that we are finally seeing and feeling fall across the Capital Area this pattern will stay put well into the weekend. Click here to see the 7-day forecast. 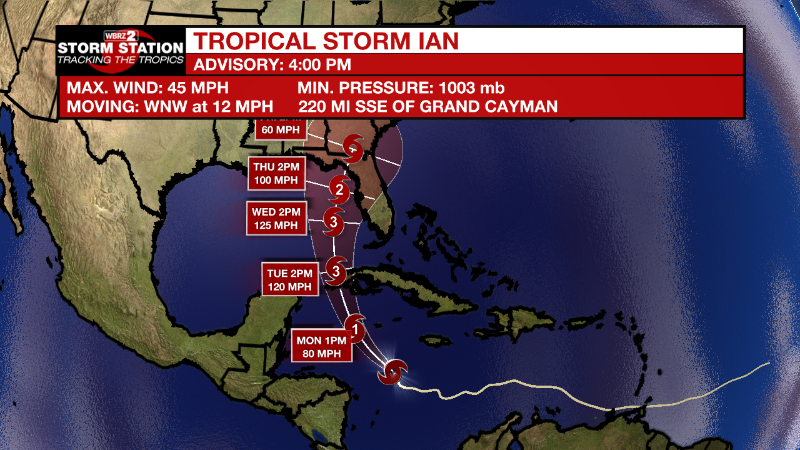 Tropical Storm Ian formed on Friday morning in the central Caribbean Sea. As of 4pm Sunday maximum sustained winds now at 50mph. By early Monday morning, Ian will turn to the northwest and become a hurricane on approach to the Cayman Islands. Rapid intensification is expected with this storm as it continues to move northwest into the northern Caribbean. Florida could be a target of then Hurricane Ian by the middle of next week.

Tropical Storm Gaston continues churning near the Azores with maximum winds of 50mph. The storm will bring heavy rain and wind to the islands while swinging around to the southwest and west while gradually weakening by Monday.

Central Tropical Atlantic:
An area of low pressure located several hundred miles west of the
Cabo Verde Islands continues to produce disorganized shower and
thunderstorm activity.  Despite the proximity of nearby dry air,
upper-level winds appear to be generally conducive and could
support some gradual development through the middle to latter
portion of this week as the system moves slowly northward.
* Formation chance through 48 hours...low...20 percent.
* Formation chance through 5 days...low...30 percent.