Stretch of steamy days into summer

The bigger weather story over the next several days will not be rain and storms, rather oppressive heat and humidity. Nighttime lows especially, will be very uncomfortable.

Remnants of morning storm complex in Shreveport will sneak into the northwest corner of the @WBRZweather forecast area... Centreville, Woodville, New Roads & St. Francisville may get a quick shower. #LaWX pic.twitter.com/ZeFF1Kn069

Today and Tonight: On Wednesday, only a stray shower or thunderstorm will pop in the daytime heating. Thermometers will warm into the 90s by early afternoon with light, southwest winds maintaining oppressive humidity. Overnight will be partly cloudy with lows in the mid to upper 70s.

Up Next: Rain coverage should continue stay low through the end of the week, as drier air develops over the area. Ironically, the drier air will mean that any storms that can develop could more easily produce strong, gusty wind. So, while the action may be less widespread, the isolated storms could be a bit more intense. Be aware of that possibility through Friday. This weekend, high temperatures will be slightly above average with highs in the mid 90s and lows in the mid to upper 70s.

The Mississippi River: At Baton Rouge, major flood stage continues with a level of 43.4’ as of Wednesday morning. Peaking at 44.1’ on March 19, the river set its 7th highest recorded crest at Baton Rouge. At 165 days, this year marks the longest period above flood stage at Baton Rouge. The level will slowly begin to fall, but is likely to stay above flood stage for several weeks to come. The high water will remain an issue for river traffic and river islands, although some inundation will continue for unprotected low-lying areas. The city of Baton Rouge and the main LSU campus are protected by levees up to 47 feet. Some soggy areas and seepage may be noted due to the long duration of high water placing pressure on the levees. As some of the Mississippi River diverts into the Atchafalaya River, gauges at Krotz Springs and Morgan City will stay high as well. This creates backwater flooding in parts of Assumption Parish in areas such as Bayou Chene, Stephensville and around Lake Palourde.

Atmopsheric moisture content will be decreasing over the forecast area on Wednesday. The daily marine breeze and diurnal flux in temperatures will be the primary triggers for convection. A convective complex moving through northwestern Louisiana Wednesday morning is expected to weaken but the resulting outflow could potentially stir up a shower or two by afternoon, especially in southwest Mississippi and neighboring Louisiana Parishes. Especially on Thursday, continued drying of the atmosphere will keep the numbers of showers and thunderstorms that develop low, but mid-level dry air ironically increases the threat for damaging wind gusts, so the few storms that can pop may be strong. The week will end with more typical daytime warming induced isolated to scattered showers and thunderstorms. 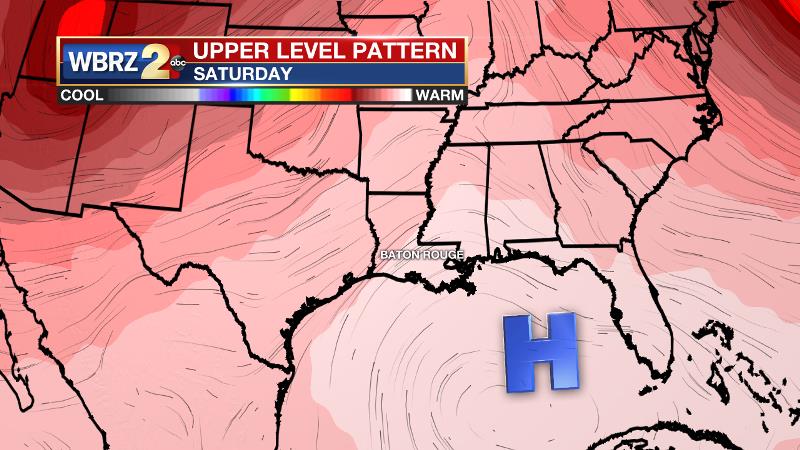 A ridge should then expand out of the tropical Atlantic into the Gulf of Mexico Saturday, so a drier and warmer pattern is likely to return with only 10 to 20 percent rain coverage during peak heating hours. This will also allow high temperatures to reach the mid 90s in many areas with very uncomfortable nighttime low temperatures in the upper 70s.