From breathtaking ice sculptures to the frozen pants challenge, people were buzzing around the polar outbreak in late January. However, just five days later, few took notice when Chicago temperatures climbed to a record high minimum. With temperature swings of 70°F or more around the Midwest, concerns shifted to potholes and pipe bursts. These rapid thaws are yet another sign that winters are warming, as below-normal temperatures struggle to persist.

An analysis of 244 cities with data going back to 1970 revealed that winter cold streaks trended at least one day shorter in 91 percent of them. Additionally, the longest annual streak of below-normal winter temperatures has gotten shorter in nearly all cities analyzed. 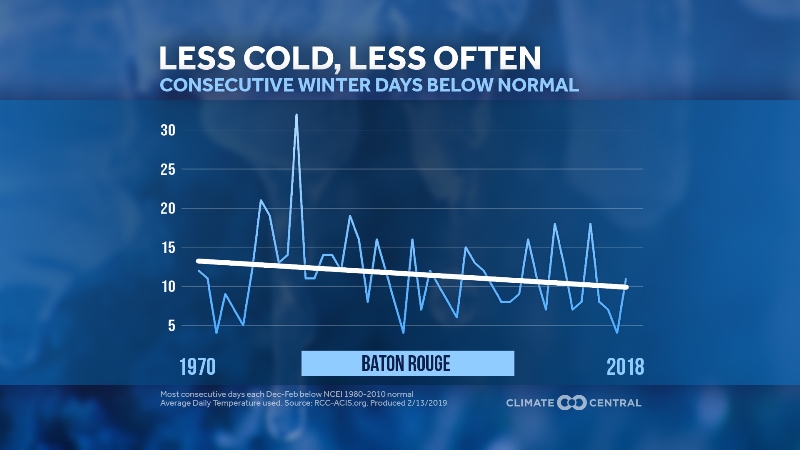 The average trend across cities was a reduction of nearly five days, with 45 locations seeing their cold streaks shorten by at least a week. Cities around the country — including Las Vegas, Topeka, St. Louis, and Philadelphia — were among those seeing the cold fade the most quickly.

It is not just about shorter stretches of cold temperatures; climate change is causing a general rise in average temperatures throughout the year. Some seasons are warming faster than others. Winter is the fastest-warming season in 38 states, including Louisiana.

These trends are affecting national industries that depend on consistent cold. Below-freezing temperatures are a must for winter recreation — an industry that contributed more than $20 billion to the national economy in the 2015-2016 season. According to Climate Impact Lab, every state in the contiguous U.S. will see fewer days with snow-friendly lows by midcentury, leading to quicker melts and shorter winter sports seasons. In less snowy places like the Southeast, fruit trees are suffering with less regular chilling time. Just two winters ago in the Southeast, a warm February caused peaches to bloom early, before a late-winter freeze led to $1 billion in crop damage. February 2017 and 2018 went back to back as the warmest on record in Baton Rouge.  Warmer winters could even make those Valentine’s Day strawberries harder to come by — not to mention chocolate or champagne.

Winter data (December, January, and February) was collected from the Applied Climate Information System. The graph indicates each year’s highest number of consecutive winter days below the 1981-2010 NOAA/NCEI climate normal. Displayed trend lines are based on a mathematical linear regression.