Regardless of development and track, low could bring heavy rain to Gulf Coast

With increased rain and thunderstorms expected this week, remember that warm season thunderstorms are capable of heavy rain and nuisance flooding as well as frequent lightning. If you hear thunder, go inside a sturdy structure to stay safe until the storm passes. Additionally, with regard to the tropics, do not focus on if the storm develops or storm category, just focus on the expected impacts.

The Tropics: A broad surface low in the northwestern Caribbean Sea is producing clouds, showers and thunderstorms all the way to the Florida Straits. Strong upper level winds, dry air and proximity to the Yucatan Peninsula will inhibit development through Thursday. Environmental conditions could become more favorable for development and a sub-tropical or tropical depression could form this weekend over the eastern or central Gulf of Mexico. Regardless of development, heavy rain will be a threat from the Central to Eastern Gulf Coast through the Memorial Day Weekend. The National Hurricane Center has assigned Invest 90L a 60 percent chance of further development.

"A sub-tropical or tropical depression could could form this weekend over the eastern or central Gulf of Mexico." -@NHC_Atlantic

Whatever comes of this system, heavy rain possible between Louisiana & Florida, forecast will hone in on areas of highest amounts in the coming days pic.twitter.com/PjL5hpaQEQ

Today and Tonight: Similar to Tuesday, Wednesday afternoon will bring isolated showers and thunderstorms, with slightly better rain chances north of I-10. Highs will top out in the low 90s. If Metro Airport does in fact hit 90 degrees, it will be a record breaking 13 consecutive days in the 90s, a streak never recorded before in May. After showers and clouds diminish overnight, mostly clear skies will allow lows back into the low 70s.

Up Next: Coverage of showers and thunderstorms will increase through the end of the week. By the Memorial Day Weekend, a feed of moisture from the tropics may further enhance rain. Unfortunately, this could put a damper on many outdoor plans. Through Monday, a broad 2-5 inches of rain is expected, which would be manageable. As is typical with tropical thunderstorms though, downpours will be possible and could result in isolated higher amounts to cause localized flooding issues. At this time, it appears that the highest totals will occur just east of the local area in south Mississippi and south Alabama. 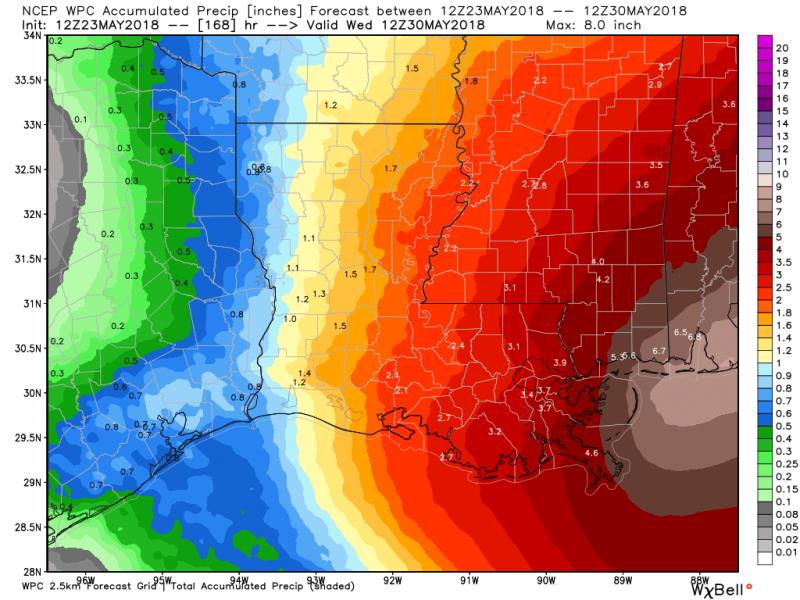 A broad upper level trough will narrow and focus into an upper level low through the end of the week. Cooling aloft associated with this low will result in additional instability and increased coverage in daily showers and thunderstorms. Not to mention, spokes of energy pin wheeling around the low may result in some nighttime rain in addition to the traditional diurnal precipitation cycle. This upper level low may develop a surface connection with a low moving into the Gulf of Mexico and some tropical or sub-tropical development is possible. Forecast models remain somewhat split on the path of this system with the ECMWF pushing it due north toward the Mississippi/Alabama coast and the GFS near the west coast of Florida. Still, some consensus with smoothing from the Weather Prediction Center focuses the area of heaviest rain from coastal Mississippi eastward to the Florida panhandle. The 13 Parish, 3 County WBRZ Weather forecast area should receive 2-5 inches of rain through Tuesday with isolated higher amounts. Where the higher amounts occur, there may be some localized flooding issues. By the middle of next week, the associated upper low should break away to the northeast, restoring a more typical warm season pattern with only isolated showers and storms.