Today and Tonight: The heat will still crank up for your Tuesday, but there is a slightly better chance of experiencing a cooling shower through the afternoon and evening. There will also be more cloud cover today, which should keep temperatures and heat indices just shy of heat advisory criteria. It still will be hot, as temperatures will top out near 96° and ‘feels-like’ temperatures will hover between 105° to 108°. Clouds will be increasing through the evening hours, allowing for mostly cloudy skies to develop. Temperatures will be slow to cool, dropping into the 80s around 8 PM, with an overnight low of 77°. Conditions will also be muggy, as the dewpoints will stay in the mid-to-upper 70s. 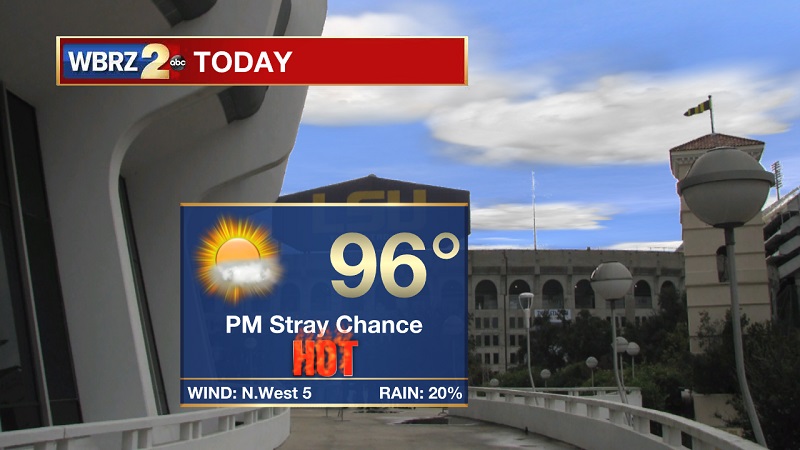 Up Next:  Temperatures slowly cool through the remainder of the workweek, as a potential tropical system develops offshore of the Florida panhandle and moves west along the northern Gulf. Scattered to widespread showers and storms will be possible through the weekend and into the beginning of the workweek. 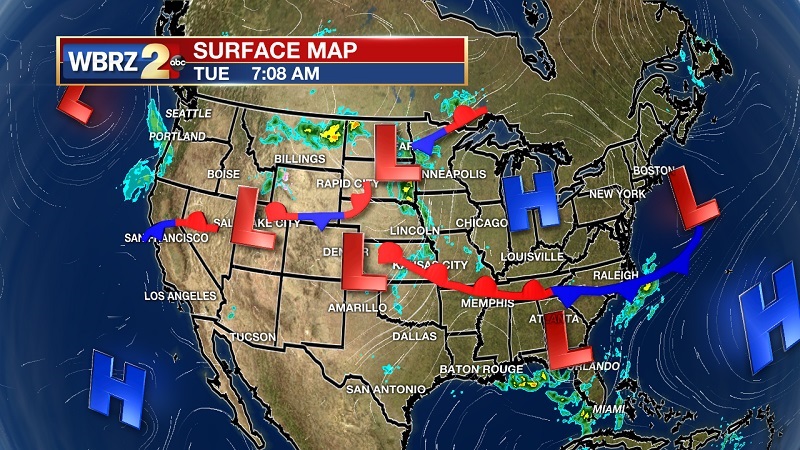 The Tropics: A broad low pressure system located over the eastern Florida Panhandle is producing disorganized shower activity. The low is forecast to move southward to southwestward and emerge over the northeastern Gulf of Mexico later today. Once the system is over water, environmental conditions are expected to be conducive for tropical cyclone formation, and a tropical depression is likely to develop by late Wednesday or Thursday while the system moves westward across the northern Gulf of Mexico. Regardless of whether or not a tropical cyclone forms, this system has the potential to produce heavy rainfall along portions of the northern and eastern U.S. Gulf Coast later this week. Currently, weather models are in disagreement about intensity and forecast path, but most are hinting at pushing onshore in western Louisiana into east Texas as a tropical depression. It is still too far out to determine its exact movement late this week, so it is imperative to stay up-to-date with developments. The National Hurricane Center forecast a 50% of tropical formation in the next 2 days, and an 80% chance in the next 5 days. 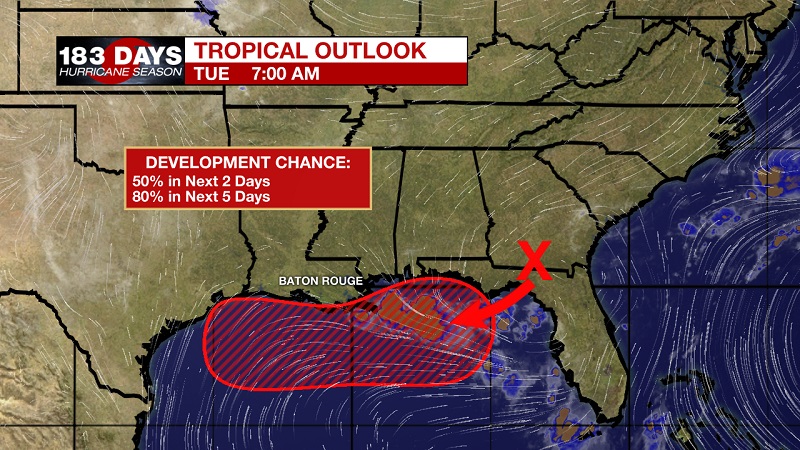 Showers and storms should have a little easier time developing along a surface trough that should produce enough cloud cover to keep heat indices just shy of heat advisory criteria. Showers should be more confined to areas along the coast, but some rogue cells could break north and along the I-10 corridor. A short wave could push in from the east and into the lake region between 8 PM and 11 PM, and a cell or two from this system could make it through. This impulse will increase cloud cover tonight. An area of low pressure is travelling to the East Gulf through Florida, where it is likely to develop and strengthen into the tropical depression on Thursday. Rain chances increase beginning Wednesday across our area, but these hump day showers will be associated with afternoon storms developing due to convection and the warming of the day. Showers and storms associated with the developing Gulf system will begin on Thursday and stay through the weekend. The potential tropical system will then move west along the northern Gulf, but that is when model guidance deviates. Current consensus brings it onshore in eastern Texas or western Louisiana over the weekend as a tropical disturbance, but these models have been wavering run-to-run over the last 24 hours. We are still about 2 days out from this low potentially forming, and 4 to 5 days out from impacting the Gulf Coast, so forecast confidence is still rather low. It is important to stay updated on this storm’s potential to gain tropical characteristics, and its forecast track. Stay Tuned.