NASA’s Parker Solar Probe has taken its first visible light images of the surface of Venus from space.

Though Parker Solar Probe’s focus is the Sun, Venus plays a critical role in the mission: The spacecraft whips by Venus a total of seven times over the course of its seven-year mission, using the planet’s gravity to bend the spacecraft’s orbit.

These passes can yield some unique and even unexpected views of the inner solar system. During the mission’s third Venus gravity assist on July 11, 2020, the onboard Wide-field Imager for Parker Solar Probe, or WISPR, captured a striking image of the planet’s nightside from 7,693 miles away.

Smothered in thick clouds, Venus’ surface is usually shrouded from sight. But in two recent flybys of the planet, Parker used its Wide-Field Imager, or WISPR, to image the entire nightside in wavelengths of the visible spectrum – the type of light that the human eye can see – and extending into the near-infrared. 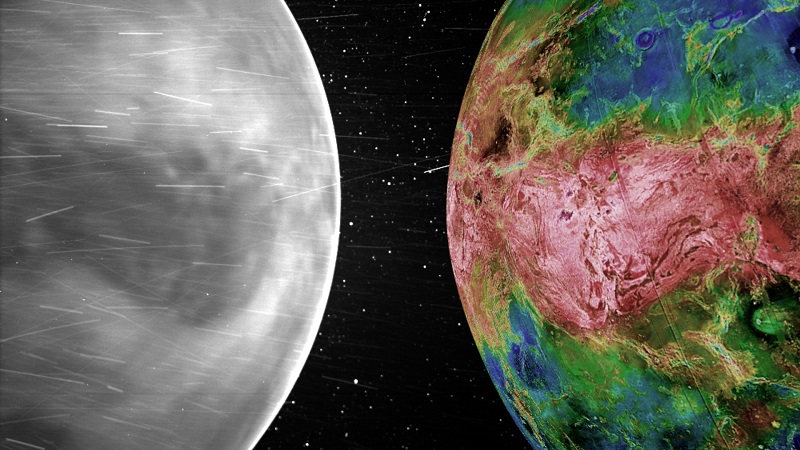 The images reveal a faint glow from the surface that shows distinctive features like continental regions, plains, and plateaus. A luminescent halo of oxygen in the atmosphere can also be seen surrounding the planet.

“We’re thrilled with the science insights Parker Solar Probe has provided thus far,” said Nicola Fox, division director for the Heliophysics Division at NASA Headquarters. “Parker continues to outperform our expectations, and we are excited that these novel observations taken during our gravity assist maneuver can help advance Venus research in unexpected ways.”

Such images of the planet, often called Earth’s twin, can help scientists learn more about Venus’ surface geology, what minerals might be present there, and the planet’s evolution. Given the similarities between the planets, this information can help scientists on the quest to understand why Venus became inhospitable and Earth became an oasis.

“Venus is the third brightest thing in the sky, but until recently we have not had much information on what the surface looked like because our view of it is blocked by a thick atmosphere,” said Brian Wood, lead author on the new study and physicist at the Naval Research Laboratory in Washington, DC. “Now, we finally are seeing the surface in visible wavelengths for the first time from space.”

CLICK HERE TO VIEW THE FULL ARTICLE FROM NASA