A front is stalled out and weakening over the region. Cooler and drier air is being driven in by northerly winds behind the boundary, but it will not make much more southward progress. This will mean scattered showers and thunderstorms but not any significant change in temperatures or humidity.

Today and Tonight: Thursday will not be quite as active as Wednesday in terms of showers and thunderstorms but a pretty good number of them is still expected to show up on radar. There is a slightly better chance south and east of Baton Rouge compared to north and west locations. High temperatures will again be limited to the low 80s by clouds and precipitation. While that is a little cooler than average, it will still feel humid. Overnight, showers will wane with lows trying to bottom out around 70 degrees. Some southwest Mississippi locations could sneak into the upper 60s but even that is above average for the time of year.

Up Next: For Friday and Saturday, the pattern should revert to typical morning sun and afternoon showers with a slight warming in temperatures. An even drier and warmer pattern is expected into next week with highs in the upper 80s and lows in the low 70s. 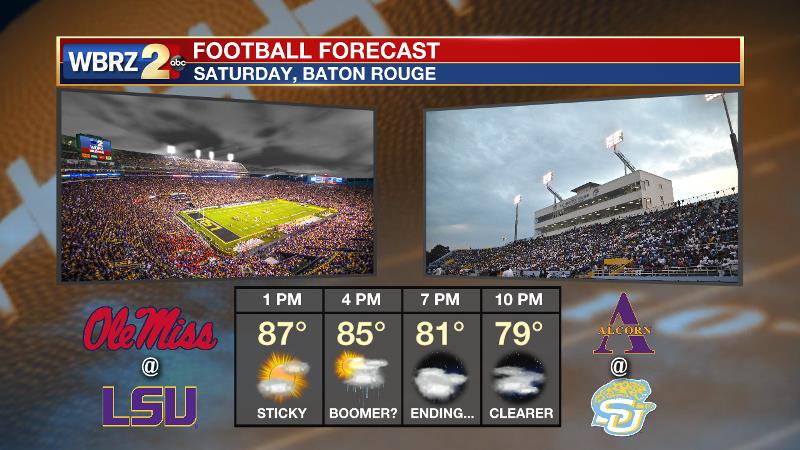 Football Forecasts: Friday night high school games should find showers and thunderstorms diminishing in coverage around kickoff. One or two games could meet a delay if there are any remnant lightning strikes around. LSU and Southern play host this weekend and both fanbases will contend with humidity and possibly a shower or thunderstorm in the afternoon. From 6-8pm as both games kickoff, any precipitation will be ending. 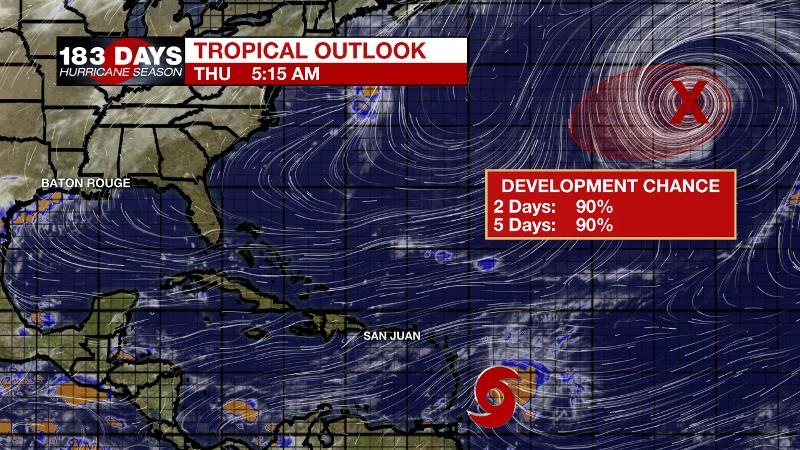 The Tropics: Tropical Storm Kirk is set to bring heavy rain and gusty winds to the Windward and Leeward Islands through Thursday. Unfavorable upper level conditions will then cause the system to dissipate in the Caribbean Sea by early next week. In the North Atlantic, the remnants of Leslie are producing hurricane force winds well west of The Azores. This system has a 90 percent chance of reacquiring subtropical or tropical characteristics over the next day or so as it drifts over the central Atlantic.

A cold front is stalled out in central Louisiana and southwest Mississippi. High temperatures will struggle to go warmer than the middle 80s due to the abundance of cloud cover and precipitation. With this system in the region, winds will shift to a light, northerly direction and some slightly lower dew points could make it as far south as I-10, allowing low temperatures to reach the upper 60s and low 70s on Thursday and Friday morning. The long wave trough driving this boundary will bottom out in the Mid-Mississippi River Valley on Thursday before lifting away to the northeast on Friday. As this occurs, the front is expected to dissipate and the area will simply lie beneath a weakness aloft between two ridges. This will allow isolated to scattered, afternoon showers and thunderstorms to remain in the forecast through Saturday. By Sunday, a strong ridge in the Southeast is expected to expand westward over much of our forecast area. This will result in lower rain chances and a continuation of above average temperatures into early next week.