Near record warm May followed by a steamy June weekend

May 2018 concluded with an unprecedented hot streak of 21 straight days reaching 90 degrees, which was enough to, make it the second hottest May on record at Metro Airport since 1930. As you know though, much hotter weather can be expected for June, July and August and the first three days of the new month will be the hottest so far in 2018.

Today and Tonight: Another fast climb in temperatures is expected with the 90s by lunchtime and the low to mid 90s for mid-afternoon highs. Mostly sunny skies will persist and the rain chances are just above nil. Lows will only fall into the mid 70s overnight with mostly clear skies.

Up Next: With mostly clear skies and low rain chances, high temperatures will warm into the mid and possibly upper 90s Friday Sunday. Humid air will result in feels-like temperatures between 100-105 degrees. There is a shot at some showers and thunderstorms on Sunday as a weak cold front settles into the region and stalls. Unfortunately, this will not provide much of a change in temperatures, but will allow rain chances to stick around through the middle of next week. 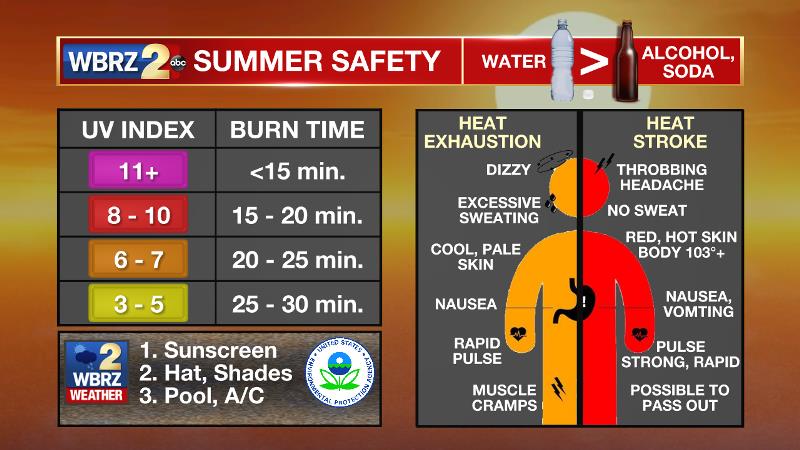 Some friendly reminders for your summer of fun events—sunburn can occur in less than 15 minutes with the extreme U.V. Index typical of this time of year. In addition to that, the symptoms of heat exhaustion and heat stroke can set in just as quickly. Recognize the signs and symptoms displayed in this graphic. Seek medical attention if you or somebody you know is affected. While we all enjoy a list of cool beverages, be sure water is at least a part of that list! Finally, look before you lock. DO NOT leave people or pets in an unattended car.

An upper level ridge axis oriented from southwest to northeast will nudge over the Lower Mississippi River Valley through the weekend resulting in drier air aloft and increased subsidence. This will keep rain chances very low. Subsidence due to the ridge will allow warming surface temperatures. Meanwhile, light onshore flow will keep dew points very high and well into the 70s. This combination will result in the most uncomfortable warmth so far this year. Saturday and Sunday especially will bring high temperatures into the upper 90s and feels-like temperatures well over 100 degrees. A weak cold front will move into the area on Sunday providing a focal point for showers and thunderstorms to develop. The boundary will stall out as the upper ridge slowly retreats southwestward on Sunday and Monday. As this occurs and the front stalls out, the atmosphere will be a little more open to convection and therefore isolated showers and thunderstorms have been placed in the forecast through early next week. A through digging into the Eastern U.S. will graze the local region by the middle of next week. The associated trough axis crossing the region should be enough to trigger scattered to widespread showers and thunderstorms Tuesday or Wednesday.