Today and Tonight: We are continuing a summer-like pattern with afternoon showers and thunderstorms. Today, high temperatures will be in the low 80s under mostly cloudy skies. By late morning/early afternoon, showers and storms will likely begin to pop up again, similar to yesterday but not as widespread of intense coverage. Still anticipating around 70% of rain coverage across the area. Tonight, temperatures will drop into the mid 60s with muggy conditions remaining. 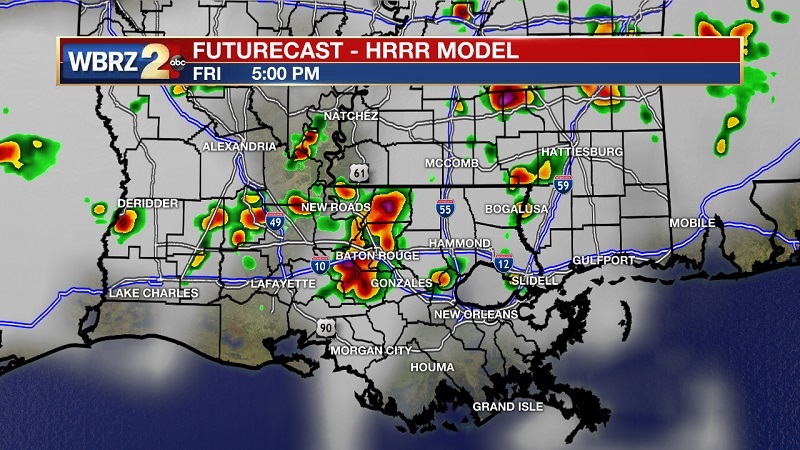 Up Next: The chance for rain will continue into the weekend. Saturday, there will be a slight chance for showers and maybe even a thunderstorm in the afternoon. Sunday, we’ll be watching a line of storms coming out of east Texas that may have just enough energy left to carry the line into our area. This would be a heavy rain and gusty wind threat. We’ll continue to monitor through the course of the weekend. 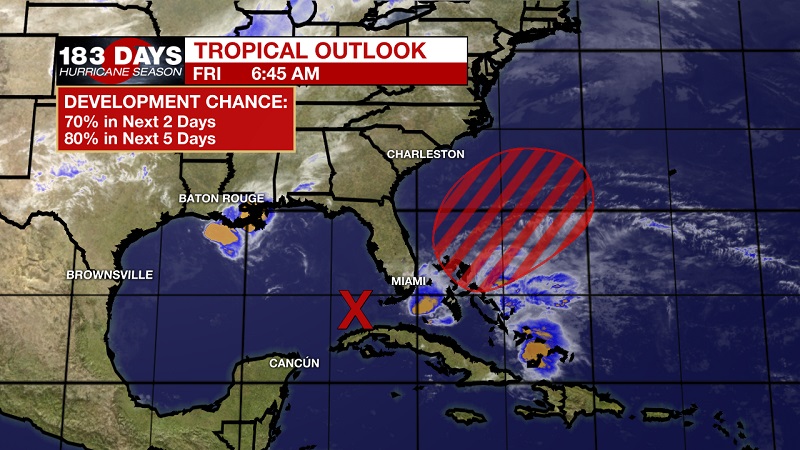 The National Hurricane Center is monitoring an area of low pressure that is currently bringing plenty of rainfall to south Florida. As the system marches towards the northern Bahamas, conditions will become more favorable for tropical or subtropical development over the weekend. If the system gets named, it will be the first named storm of the season – Arthur. This system will not impact the Gulf Coast.

We’re getting closer and closer to the heat of summer here in south Louisiana and you know what that means – plenty of rain chances each and almost every day. That trends continues this afternoon with pop up showers and thunderstorms expected, triggered by plenty of onshore flow and afternoon heating. Any thunderstorms that develop could dump heavy rainfall and also produce frequent lightning, along with gusty winds. This could once again cause some travel concerns later today, with ponding on roadways and in those usual trouble spots. Soils are already saturated from yesterday's storms, so it will not take much to cause localized flooding concerns. Saturday, some dry air aloft will likely prevent as widespread of coverage of showers and storms. Sunday, as previously mentioned, we’ll be keeping our eyes on a line of thunderstorms that will try to enter our area from the west late in the day. The big question is how quickly will the line of storms get here and how much “fuel” will be left for the line to tap into. An earlier arrival will mean a more intense line of storms, whereas a later arrival (after sunset) will mean a weaker line of storms. Aside from rain chances, daily high temperatures will continue to climb over the weekend into the mid 80s.