An unusual June cold front will provide more comfort, especially in the mornings, over the next few days. Rain free weather will continue as well.

Today and Tonight: Noticeably drier air has moved into the forecast area and this will persist for a few days to come. Expect sun and passing clouds on Tuesday with high temperatures topping out in the mid 80s. The coolest night of the week will follow with low temperatures stopping in the mid 60s—even some low 60s are possible north of I-12!

Up Next: More pleasant weather will carry across the Gulf Coast through much of the workweek. High temperatures will hover in the mid 80s with lows in the mid-60s. An area of low pressure stalled over the east coast will keep northerly winds driving cooler air into our region. That will change by weekend with enough moisture returning for showers and thunderstorms to flare in the afternoons. 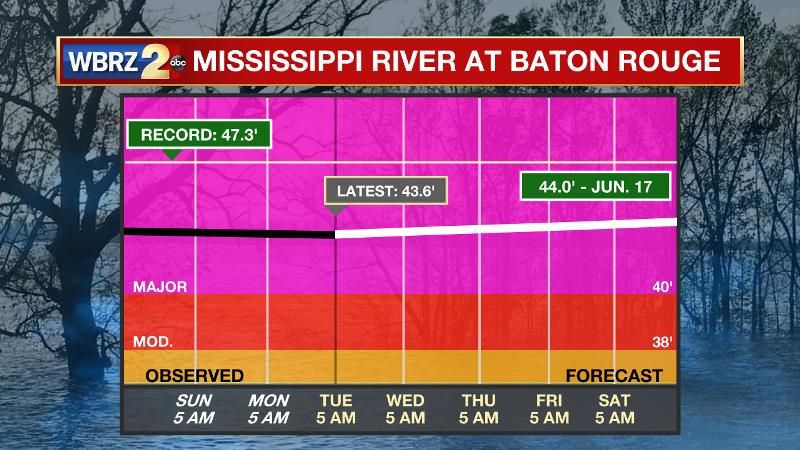 The Mississippi River: At Baton Rouge, major flood stage continues with a level of 43.6’ as of Tuesday morning. Peaking at 44.1’ on March 19, the river set its 7th highest recorded crest at Baton Rouge. At 153 days, this year marks the longest period above flood stage at Baton Rouge. With continued heavy rain events in the Midwest, runoff will result in a second, higher crest in early June. The current forecast is for the level to reach 44.0’ around June 17. The Morganza Spillway opening has been delayed indefinitely and may not be necessary thanks to water levels running lower than originally forecast. On the Mississippi River, the high water will remain an issue for river traffic and river islands, although some inundation will continue for unprotected low-lying areas. The city of Baton Rouge and the main LSU campus are protected by levees up to 47 feet. Some soggy areas and seepage may be noted due to the long duration of high water placing pressure on the levees. As some of the Mississippi River diverts into the Atchafalaya River, gauges at Krotz Springs and Morgan City will stay high as well. This creates backwater flooding in parts of Assumption Parish in areas such as Bayou Chene, Stephensville and around Lake Palourde.

A cold front has pushed through the region and settled across the Gulf of Mexico. Lower dew points result in a less humid feel with air temperatures dropping into the 60s Tuesday morning. Through Thursday, expect highs to stay in the mid 80s and some uncharacteristically comfortable mornings in the mid 60s. A reinforcing front may aid this feel on Wednesday. Alas, it is climatological summer and the dry air will give way to Gulf moisture by Friday. Southerly winds will increase and fling humidity inland. Showers and thunderstorms then enter the forecast and other than an initial surge of showers with the returning moisture Friday night, a more normal diurnal rain cycle should emerge through the weekend.