'I heard the train, then I heard the shots': LSU student found shot to death in car at Gov't St. railroad crossing

BATON ROUGE - An LSU student was gunned down in Downtown East while stopped at a railroad crossing late Thursday night.

The Baton Rouge Police Department said the victim, 21-year-old Allison Rice, was found shortly after 2 a.m. on Government Street, between I-110 and Park Boulevard. Investigators said she was shot multiple times.

Rice's car was stopped at a railroad crossing on Government Street and had multiple bullet holes in it when police found it, sources said.

"I heard the train, then I heard the shots," a witness told WBRZ Friday.

"The LSU community is saddened to hear of senior Allison Rice being killed overnight. Her family and friends are in our thoughts, and we encourage anyone who may have more information about this crime to contact Baton Rouge Police.

Any of her friends and classmates that would like to speak with someone about this or needs help processing this loss can contact the Mental Health Service in the Student Health Center (225-578-8774)."

Police are still trying identify who shot Rice and what led to the killing.

"[A deadly shooting] is not surprising... someone stole an ice box... so much goes on out here.  It don't make a difference about a shooting... every other night, somebody is shooting," the witness said.

"We got a lot of problems around here... when night fall, I try not to leave my house.  I'm not trying to be  out here at night," the witness, Floyd Norman, told reporters Friday afternoon near where Rice was found gunned down.

Rice worked at The Shed, a restaurant on Burbank Drive. The business posted on Facebook, mourning her death. 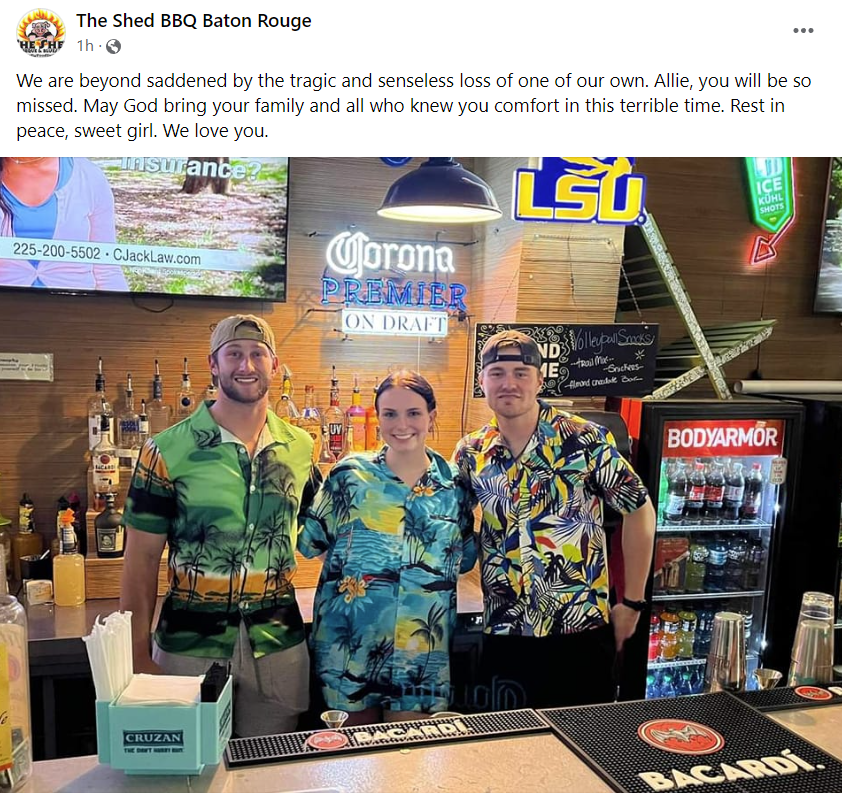 "My heart goes out to the family, loved ones, and classmates of Allison Rice, a young LSU student who had her entire life ahead of her. This senseless violence is completely unacceptable and Baton Rouge Police officers are thoroughly investigating to bring the perpetrator to justice.

Our university community is an essential part of the fabric of Baton Rouge. It is of the utmost importance as we welcome students from across our state and the nation that we create a safe environment. I am coordinating a meeting with LSU and Southern University’s Presidents, BRCC Chancellor, Student Government, BRPD and East Baton Rouge Sheriff’s office to discuss safety for all of our college students in Baton Rouge.

I urge anyone with information about this senseless crime to please contact Baton Rouge Police Department or Greater Baton Rouge Crime Stoppers."

"It's very sad," Baton Rouge Police Chief Murphy Paul told WBRZ's Brittany Weiss Friday.  As of 1 p.m., he said it was not clear if Rice was targeted.

"We are canvassing the area, meeting with businesses... trying to get all the evidence we can get," the chief said.