The storm station is tracking a significant winter storm that will move across the country this weekend. While wintry precipitation is not a concern for the local area, wind chills will be a factor on Sunday.

Next 24 Hours: Increasing clouds are expected overnight in advance of a strong cold front. Southeast winds out ahead of this system will hold low temperatures in the low 50s and likely cause them to rise through daybreak. Around dawn Saturday, scattered showers will begin to develop. Ahead of the front, high temperatures will make it into the 60s for a short time. However, as a band of showers and isolated thunderstorms blows through around midday, winds will become northwesterly at 10-20mph and temperatures will drop. Expect thermometers to fall through the 50s and into the 40s by Saturday evening.

Up Next: Behind the cold front, northwest winds of 10-20mph, and gusts over 30mph, will continue ushering in much colder air into Sunday morning. While low temperatures will be in the 30s as the day begins, wind chills will be in the 20s. Afternoon high temperatures will struggle to reach the mid 40s with wind chills in the 30s. Especially early, cloud cover will linger with just enough moisture for some sprinkles or possibly even snow flurries, mainly north and east of Baton Rouge. Any flying flakes will be isolated and not stick. As winds lighten and skies clear, low temperatures will then get close to freezing on Monday morning. Sunshine will push high temperatures back into the 50s during the afternoon. Tuesday will remain dry and turn milder before the next cold front arrives late Wednesday. CLICK HERE for your detailed 7-Day Forecast.

The Explanation: A significant upper level trough of low pressure over the Midwest will merge with a smaller, shortwave trough of low pressure dropping out of Canada. As this occurs, a low pressure system and associated front will develop and deepen over the Arklatex Region into Saturday and clouds will increase through daybreak. Temperatures may sneak into the low 60s before the storm system treks across our area from the morning through the afternoon. Moisture and instability in the atmosphere will be limited so a band of showers along the cold front is the most likely scenario for precipitation. While a thunderstorm or two is possible, severe weather is highly unlikely. Dry air will cut into the storm system by Saturday evening, effectively ending precipitation from west to east. An upper level cold pool trailing the frontal system will spin over the area on Sunday morning. 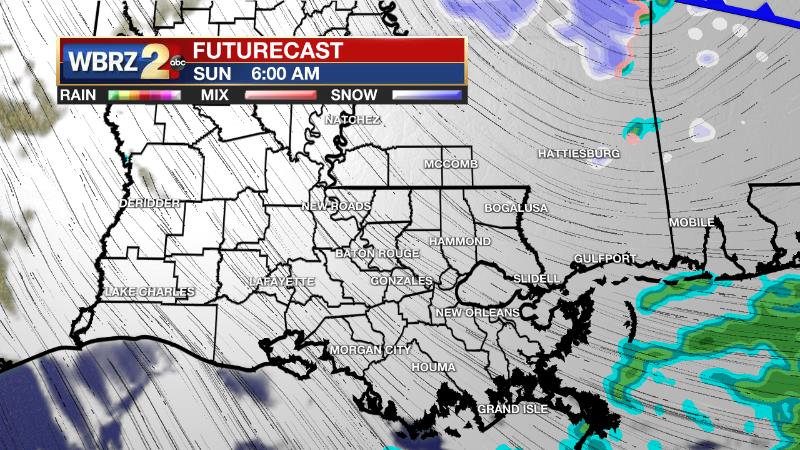 The combination of cold air and lingering moisture will maintain a low cloud deck and could be just enough for a few sprinkles or even some snow flurries in southwest Mississippi and neighboring Louisiana parishes. No accumulation of snow is expected if any flurries do fall. Clouds should clear by Sunday evening. The other ongoing story will be winds. Expect them to turn to the northwest behind the front on Saturday night and increase to 15-20mph. In addition to advancing much colder air into the region, these winds will produce feels like temperatures in the 20s and 30s for much of Sunday. Actual air temperatures will struggle to climb through the 40s on Sunday, and if the clouds hang on longer than expected, mid 40s could even be ambitious. As winds slacken and skies clear, thermometers will tumble down to freezing into Monday morning. Monday will be chilly with another freeze possible into Tuesday. Moderating temperatures are expected through the middle of the week and the upper level trough departs for a standard zonal (west to east) wind flow in the upper levels of the atmosphere. The next upper level trough will quickly build into the Southeast on Wednesday night sending another cold front through the area. This system could stall offshore to keep precipitation in the forecast, and as the upper level trough deepens to maintain cold air, there could be some interesting possibilities by the end of next week. The conditions do not like quite right at this time, so we will not say the words, but stay tuned.