Below is a list of preliminary estimated restoration times for affected communities.

Entergy says these are general descriptions of its local network. The company adds that cities and towns within those networks in some cases will see power earlier than those dates.

Specific restoration times down to the local area, including the coast and areas in the immediate path of the storm, are continuing to be developed and will be released in the coming days. 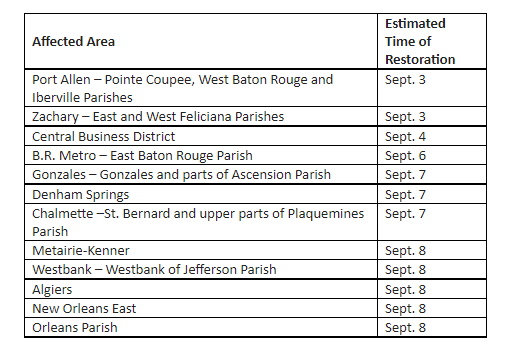 According to the power company's Friday morning memo, in the five days since Hurricane Ida made landfall in Louisiana, Entergy crews have restored power to approximately 225,000 customers.

The assessment continues in the most damaged areas, but in parallel, the restoration process is well underway.

Entergy explained Friday that the preliminary estimates for restoration reflect completion dates, but service to many customers will be restored before these dates.

The company says that nearly 26,000 professionals from 40 states continue their around-the-clock efforts to restore power throughout the affected communities.