Tropical Depression 22 has been designated in the southwestern Gulf as Hurricane Hunters have found maximum sustained winds near 35mph. The system is expected to meander over the southwestern Gulf of Mexico through tonight before moving slowly northward on Friday and Saturday as it strengthens into Tropical Storm Wilfred.

BREAKING: Here is the first advisory for Tropical Depression 22. It is expected to become Tropical Storm Wilfred on Friday. Though not in the forecast track at this time, the central Gulf Coast should monitor this system for the potential of heavy rain. pic.twitter.com/nWCGc0QrRs

The Tropics: Now a storm of the past, Sally devastated parts of the Alabama and Florida coasts due to storm surge, wind and torrential rain. Each storm has a signature and that of Sally will be a deluge that has extended well into the Mid-Atlantic. In the central Atlantic, Teddy has become a major hurricane with maximum winds of 140mph. Large swells will spread across much of the western Atlantic into this weekend increasing a rip current threat along the East Coast. Just days after a strike from Hurricane Paulette, Bermuda will have to monitor Teddy as well. 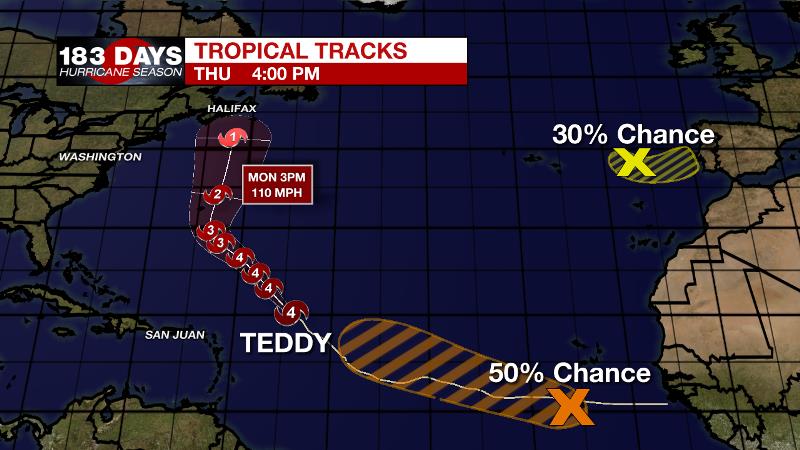 An elongated area of low pressure a few hundred miles southwest of the Cabo Verde Islands has been producing disorganized shower and thunderstorm activity. Environmental conditions are expected to be conducive for development during the next few days, and there is a 50 percent chance that a tropical depression could form before upper-level winds become less favorable by late this weekend.

Showers and thunderstorms have changed little since this morning in association with a non-tropical area of low pressure located over the far northeastern Atlantic Ocean. There is a 30 percent chance of subtropical development over the next day or so as it moves southeast and then northeast to the coast of Portugal late Friday.

The Next 24 Hours: Skies will remain partly to mostly cloudy into tomorrow morning. Lows will drop into the low 70s. A weak, reinforcing front will drift through the area early Friday. Expect a continuation of mostly cloudy skies but little in the way of rain. Thanks to the advancing northerly winds, highs will only make it into the mid 80s.

After That: North of a stalled front in the Gulf, the local area will feel lower dew points and therefore cooler than average highs and lows well into next week—indeed a little taste of fall. On the other hand, the stalled front will continue to create mostly cloudy skies and maintain some rain chances—especially south of I-10. However, if the front weakens pushes back to the north, a tropical system in the southwestern Gulf could lead to better rain chances area wide.

The Explanation: A weak cold front will cross the Gulf Coast on Friday with surface high pressure building in from the north on Saturday. Cooler than average temperatures are expected beginning on Friday. The drier air will also limit rain chances to mainly coastal areas by Saturday. After that, we will need to monitor Tropical Depression 22. As is usual, there is a lot of uncertainty in the early stages of this storm. There will likely be a battle between the surface high pressure to the north, the stalled front to the south and the tropical system in the Gulf. Should the boundary remain intact, it should keep any substantial rain over the Gulf or at most, limit it to coastal areas. At this time, an overrunning scenario looks apparent. Sunday through Wednesday, deep southerly flow with tropical moisture will rides over the stalled front leading to widespread cloudiness and times of rain along the western and central Gulf Coasts. 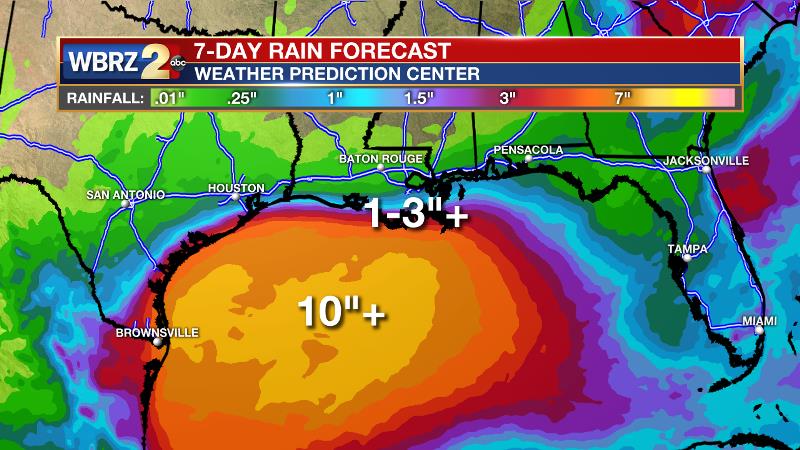 Per the Weather Prediction Center, 6-10 inches of rain will be possible over the northern Gulf, which is why this situation needs to be monitored closely. Any northern shift of the frontal positions and low could drastically change the local forecast.