A Wet End to July

Tonight and Tomorrow: Showers and storms will be lingering through much of the evening, as a long line of storms from the northwest will move into Southwest Mississippi and Southeast Louisiana around 8 PM. This line will continue to break up as it approaches the I-10 corridor, but should stay relatively together in order to provide scattered showers and isolated storms in the capital city between 9-11 PM. The line breaks up shortly after, pushing moisture more east and over Lake Pontchartrain and Lake Maurepas. Showers will dry out around midnight, leading to partly cloudy skies and cooling conditions to around 75° overnight. Winds will calm into Monday morning, but clouds will increase approaching noon. Temperatures will break into the low 90s shortly after 12 PM, with showers and storms building during that time. A line of storms will move inland from the Gulf and southeast from Southern Arkansas during the early afternoon hours. These two lines of storms will meet along the I-10 corridor around 5 PM. The storms will linger into the evening hours, but dry up by about 8 PM.

Up Next:  A wet pattern has set up this weekend, and will be sticking around through much of the week. Storm chances will peak on Tuesday, as an incoming cold front from the northwest will move through the region. The front will fall apart as it approaches the Gulf Coast, but the moisture will linger through the remainder of the week. This will allow for afternoon showers to develop through the workweek, and likely increase over the weekend as another frontal system approaches. 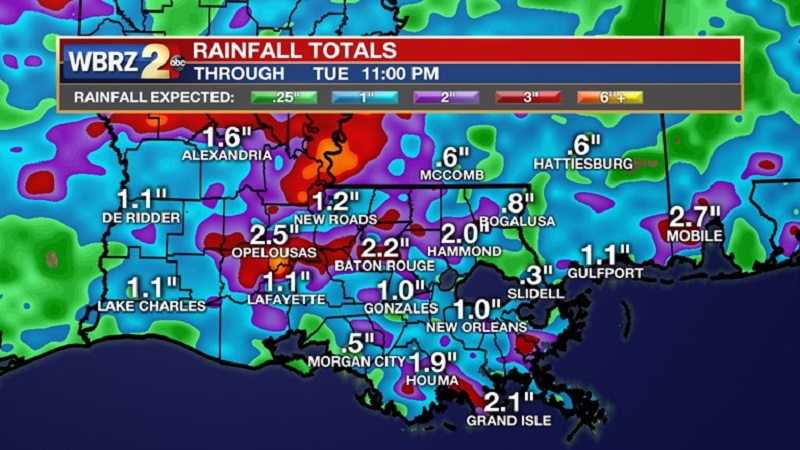 A stationary front is continuing to be anchored along the Gulf Coast, but should begin to lift on Monday. This lifting will interact with an upper level disturbance moving in from the northwest to bring another afternoon of showers and storms on Monday. This lifting of the front is associated with a strengthening low pressure system along the panhandle of Oklahoma, and it will travel toward the southeast into Arkansas late Monday and early Tuesday. This low pressure will develop a cold front along its southwest axis, which will drop into Louisiana and Mississippi to bring widespread showers and storms through much of the day on Tuesday. High pressure in the Gulf will help to break up the front, but the associated moisture will linger for much of the week. This moisture and high pressure to our south, will keep ample moisture within our atmosphere in order to produce isolated, pop-up afternoon showers through the rest of the week. High temperatures will stay below average this week, hovering around 90° due to the increased cloud cover and showers.