A few inches of rain possible through Tuesday

Last week was hot. Blame the scorching numbers partly on the lack of rain. This week, a pattern change will bring much higher chances for showers and thunderstorms and therefore less time baking under the summertime sun. A slow moving surface  low pressure  system and associated upper level disturbance will travel west along the Gulf Coast this week.

Today and Tonight: Temperatures will have no problem making a quick climb into the 90s by lunchtime. Numbers will peak near 93 degrees. However, partly sunny skies will then give way to scattered showers and thunderstorms during the afternoon hours, especially east of the Mississippi River. Frequent lightning and downpours will be possible with any storms. Unlike the usual evening shutdown, showers and thunderstorms may continue overnight with muggy lows in the mid 70s.

Up Next: A storm system will move over Louisiana and Mississippi on Tuesday leading to a very wet and much cooler day. That system will make it to Texas early Wednesday, but will leave significant moisture in its wake. This will allow afternoon showers and thunderstorms to decrease in coverage but remain scattered for the latter half of the week. Total rainfall amounts through the week could reach 3-5 inches in areas that receive the most action. Of course, where the heaviest storms happen, some nuisance flooding problems can be expected. 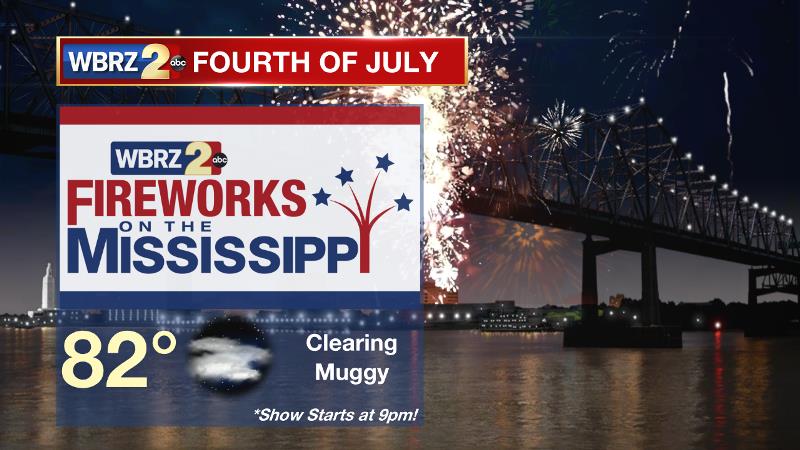 Independence Day: After a summery day, warm with afternoon rumblers, showers and storms should begin to depart to the west through the early evening hours. Should things timeout as expected, drier conditions can be anticipated just in time for WBRZ’s Fireworks on the Mississippi. Of course, it would stay warm and muggy out there with temperatures in the low 80s.

An upper level low and associated area of surface low pressure near the central Gulf Coast will be the main weather maker this week. Forecast models have consistently moved these features westward over the next three days, placing them in east Texas by Wednesday. Available moisture in the atmosphere will go from below average Monday morning to near record levels on Tuesday afternoon and back to average on Wednesday. For this reason, Tuesday is expected to be the most active day and any thunderstorms will be capable of leaving behind a couple of inches of rain. Some nuisance flooding issues could result. After the widespread showers and thunderstorms pull away to the west on Wednesday, scattered showers and thunderstorms will remain but the heavy rain threat will diminish. Adding to the early week activity, all told, 3-5 inches of rain are indicated by the Weather Prediction Center through Friday.