Another round of strong thunderstorms is possible early Friday. Beyond that, clear and seasonable weather will return just in time for the weekend.

Next 24 Hours: Skies will continue to clear overnight allowing low temperatures to dip into the upper 40s and low 50s. Since dew point temperatures will be similar, the air will become saturated calm winds will mean that some patchy fog may develop. It will quickly diminish after dawn. Thursday will feature mostly sunny skies and high temperatures in the upper 70s. A neighborhood or two could hit 80 degrees. 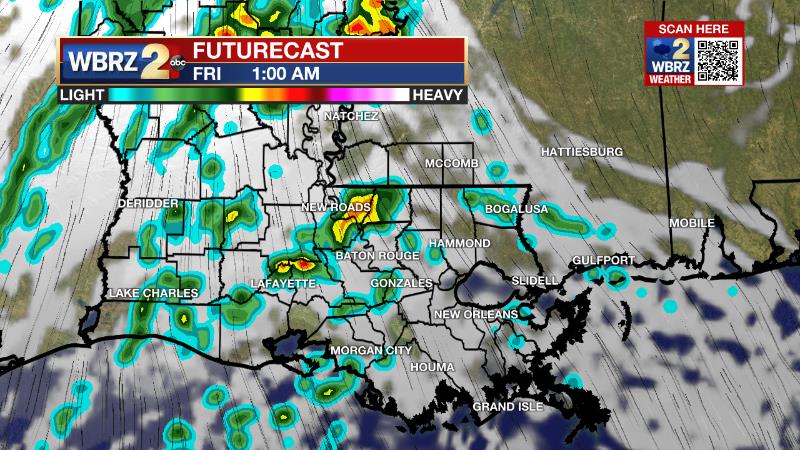 Up Next: There will be a level 2/5 “slight risk” for severe weather Thursday night into Friday morning. Thunderstorms will be capable of producing, in rank order, hail, gusty winds and a brief tornado. Individual storm cells may start to form shortly after midnight before turning into a few clusters or broken squall line of thunderstorms by daybreak. Once again, this is a "while we are sleeping" severe weather threat. So, be sure to have a way to receive alerts overnight. Activity will exit before noon. Storm downpours could leave behind an inch or so of rain in some spots and so nuisance ponding of water is possible. Skies will clear on Friday afternoon with highs in the mid 70s. As winds turn northwesterly behind the frontal system, lows will slip into the 40s. Quiet and cool weather is in store for the 35th Wearin’ of the Green Parade in Baton Rouge. Beneath mostly sunny skies, highs will top out in the upper 60s. Sunday and Monday highs will return to the 70s with rain and thunderstorms back in the forecast by later Tuesday. CLICK HERE for your detailed 7-Day Forecast.

The Explanation: Any leftover clouds will clear out as the upper level trough of low pressure system responsible for them continues to push away to the northeast. A dry air mass will rapidly clear out skies into Thursday. With clear skies and light east winds, temperatures will efficiently cool overnight and low temperatures will hit the upper 40s for most locations north of I-10. Some patchy fog could develop as lows near the dew point temperatures over inland areas. After a quiet day, a strong upper level trough of low pressure will push into the region on Thursday night. A strong cold front will form over Texas while a warm front develops over the northern Gulf of Mexico. Looking at the ingredients strong thunderstorms, the overall setup favors and solid 2/5 “slight risk” for severe weather. At the surface, warmth and moisture will create some surface instability early Friday morning. In the low levels of the atmosphere, southwest winds will be strong enough to create modest wind shear. In the upper levels of the atmosphere, strong winds will promote divergence, which promotes thunderstorm development and maintenance. The greatest overlap of wind shear and instability and therefore threat for tornadoes will come before daybreak Friday, and setup along and south of I-10. North of that, some stable air near the surface may limit the threat for tornadoes but gusty wind and hail will be possible in the stronger storms. The most favorable time period for rain and thunderstorms will be between 1am – 9am Friday. Much drier air will move into the region after this, rapidly ending precipitation and clearing skies through the remainder of the day. Another fast moving upper level disturbance will jet through on Saturday but with the cold front well offshore and much drier air in the atmosphere, mainly clear skies will continue. An upper level ridge will briefly build over the area on Sunday leading to more sunshine and warmer temperatures. This ridge will quickly migrate east of the area on Monday and onshore flow will return moisture to the area Monday night. Another upper level trough of low pressure will enter the region on Tuesday. This system will be slower moving with deeper moisture and strong winds aloft in place, the setup may become favorable for gusty thunderstorms and downpours.