A cold front will bring showers and thunderstorms—one or two strong—to the Capital Area on Thursday. Cooler and drier conditions will follow for Friday and Saturday.

Next 24 Hours: A mild night is ahead with south winds of 10-15mph holding low temperatures in the mid 60s. A few showers will be possible overnight as cold front approaches from the west. On Thursday, high temperatures top out in the mid 70s by afternoon before the cold front arrives. While spotty showers are possible early, expect an increase in showers and thunderstorms around 11am with rain chances highest immediately along the front during the afternoon hours. At that time, one or two storms could turn strong with gusty winds or even an isolated tornado. Activity will push away to the east and end around 7pm.

Up Next: Behind the cold front, temperatures will drop back below average starting Friday in the low 40s and only recovering into the 50s later in the day. Cooler temperatures will stick around Saturday as well as skies are nearly fully sunny. Sunday will be transitional with some early sun helping temperatures back to average in the upper 60s, but clouds will increase late. As moisture returns from the Gulf of Mexico due to southerly winds, periods of rain will break out on Monday. With a lull on Tuesday, temperatures will shoot above average and top out close to 80 degrees. The next cold front is expected to bring another chance of showers and thunderstorms on Wednesday. CLICK HERE for your detailed 7-Day Forecast.

The Explanation: By Wednesday night, an upper level trough and its associated cold front will start to push in from the west allowing a few showers to develop. These showers will be shallow in the atmosphere and are unlikely to be heavy or long lasting. The cold front will enter the forecast area tomorrow afternoon. The front is expected to enter the northwestern parishes and counties around 11am and exit to the east by 7pm. 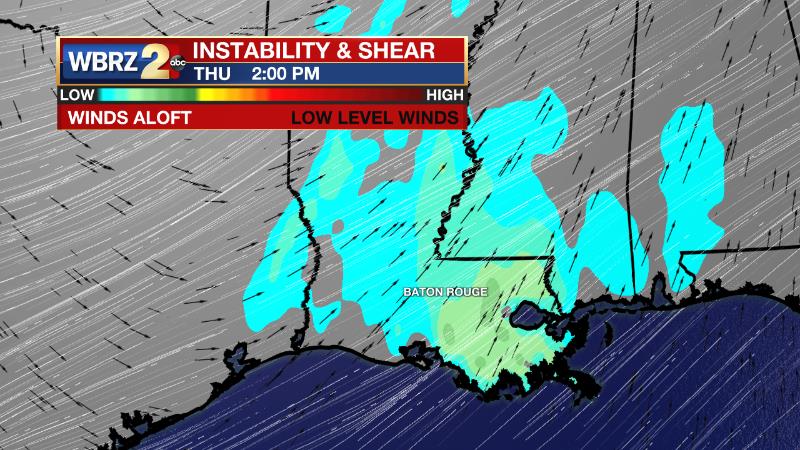 As that system arrives, low level wind shear will be impressive but upper level winds and instability will be less favorable for severe thunderstorms. Ongoing clouds and showers will decrease the amount of instability. The best lift created by strong upper level winds will primarily be north of the area. With all of that being said, the ingredients not being zero, parts of the area, especially north of I-12 are included in a 2/5 “slight” risk for severe weather with areas south of that in a 1/5 “marginal risk” including Metro Baton Rouge. The most favorable time for a severe thunderstorm or two will be during the late morning and early afternoon hours when there is the greatest combination of wind shear and instability. 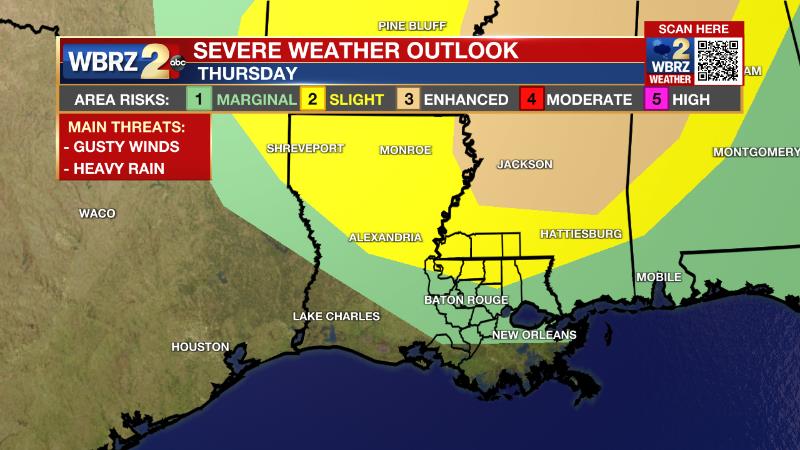 Northwest winds behind the front will usher in much colder and drier air for the end of the week and the start of the weekend. On Friday, upper level winds will setup in a zonal pattern—that is west to east—which is often indicative of quiet weather. A series of weak disturbances will move over the area, but thanks to the drier atmosphere left behind by the front, only some patchy clouds are expected. As the cold pool of air left in the wake of the front departs, temperatures will start to moderate from 10 degrees below average on Friday, to 5 degrees below average on Saturday to average by Sunday. However, since the atmosphere will remain dry, temperatures will cool into the 30s Friday and Saturday nights. By the end of the weekend, surface winds will shift back to the southeast allowing moisture to infiltrate the atmosphere. While the day is expected to remain dry, there should be a noticeable increase in clouds with skies turning overcast by Sunday night. Another upper level disturbance sliding in from the west will tap into the deeper moisture across the region and bring a swath of rain to the area on Sunday night and Monday. The atmosphere should remain too stable for strong thunderstorms, but some brief downpours will be possible. As that disturbance exits, and upper level ridge of high pressure will broaden across the Southeast. With that feature, continued onshore flow will leave plenty of moisture in place and allow warming temperatures through the middle of next week. High temperatures could be 10 to 15 degrees above average.