The warming trend will be halted by a cold front on Thursday morning. Yet another could spell times of wet weather for the weekend.

Next 24 Hours: A weak cold front will approach the area overnight. Out ahead of it, expect mostly cloudy skies and isolated showers, though any rainfall will be light. Southeast winds of 5-10mph will keep low temperatures in the mid to upper 50s. With the cold front passing through early on Thursday, any isolated showers should be east of the local area by late morning, if not sooner. Temperatures will reach their maximum in the mid 60s early. As winds turn to the north at 10-15mph in the afternoon, expect thermometers to fall back into the 50s before sunset.

Up Next: Near freezing temperatures are possible on a clear and chilly end to the workweek, Friday. With warmer air advancing highs in the upper 60s on Saturday, scattered showers and thunderstorms are then expected to develop in the afternoon thanks to a weak, upper level disturbance. Coverage in showers and thunderstorms will increase Sunday, especially late, as another cold front drops in from the north. At this time, severe weather is not a concern. Rain will be wrapping up Monday morning with temperatures back below average to begin the new week. CLICK HERE for your detailed 7-Day Forecast. 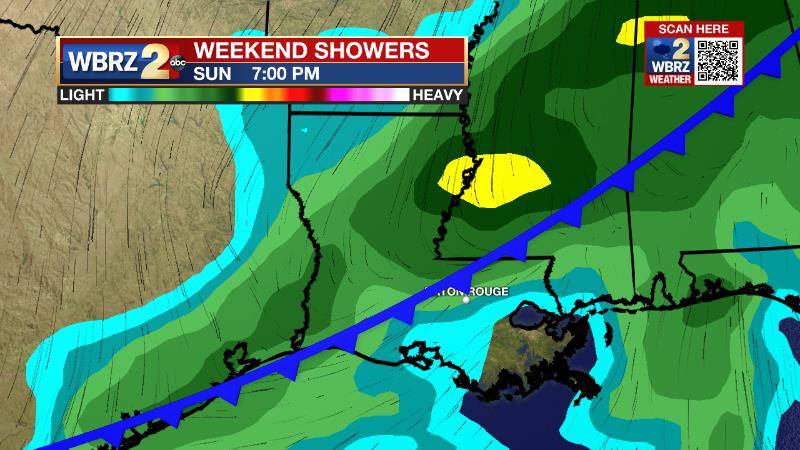 The Explanation: A broad, upper level trough of low pressure will move well north of the area on Wednesday and Thursday sending a weak frontal system into the region. The atmosphere will be rather dry still from our recent frontal passage so there will not be much moisture available for this system. However, the forcing or lift created by the front may be just enough to generate a few passing showers Wednesday night into Thursday morning followed by another pop of cool air to end the week. We will keep an eye on lows Friday morning for perhaps a third freezing night this week; the current forecast keeps numbers right around 32 degrees. Saturday and Sunday, a surface high pressure system will build over the Eastern U.S. supplying the local area with a flow of warmer, moister air from the Gulf of Mexico. As this occurs, a weak disturbance moving across the region will help to instigate scattered showers and thunderstorms, especially with the addition of daytime warming on Saturday afternoon. The onshore flow will keep temperatures mild into the second half of the weekend with lows remaining in the 60s Sunday and therefore highs easily climbing a few degrees to reach the 70s. An upper level trough of low pressure will basin just north of the local area but still send a cold front toward the Gulf Coast. Given the placement of the trough and front, atmospheric winds will not be favorable for severe weather. Also, with an expected evening or nighttime arrival of the front, instability will be limited and so there is no real threat for severe weather. Along the boundary, expect some showers and perhaps a few thunderstorms before the front sweeps through on Monday morning. While a slight ridge of high pressure builds into the upper levels—commonly a feature for warmer temperatures—a very cold air mass at the surface will undercut this and drop temperatures below average for Monday and Tuesday. Lows could be near freezing on Tuesday morning before the ridge wins out and thermometers return to average for the middle of next week.