The last time that temperatures reached 55 degrees or lower was April 26. The last time the area made it five days without rain was June 7-12. Both of those marks will likely be overtaken in the days ahead.

Next 24 Hours: Clear skies are expected overnight. With northerly breezes of 10-15mph, cool air will continue spilling in and send low temperatures into the mid 50s. Thursday will feature abundant sunshine, dry air and cooler than average temperatures. Winds will stay out of the north at 5-10mph to hold high temperatures in the upper 70s.

Up Next: Friday and Saturday will be very similar with mainly clear skies, morning temperatures in the mid 50s and high temperatures in the low 80s. By Sunday, winds will start to shift east or even southeast and thermometers will more noticeably moderate, but remain beneath seasonal averages in the upper 80s and upper 60s. Some clouds may begin to build into the area but rain does not reenter the forecast until Tuesday and even then, only isolated activity is expected. CLICK HERE for your full 7-Day Forecast. 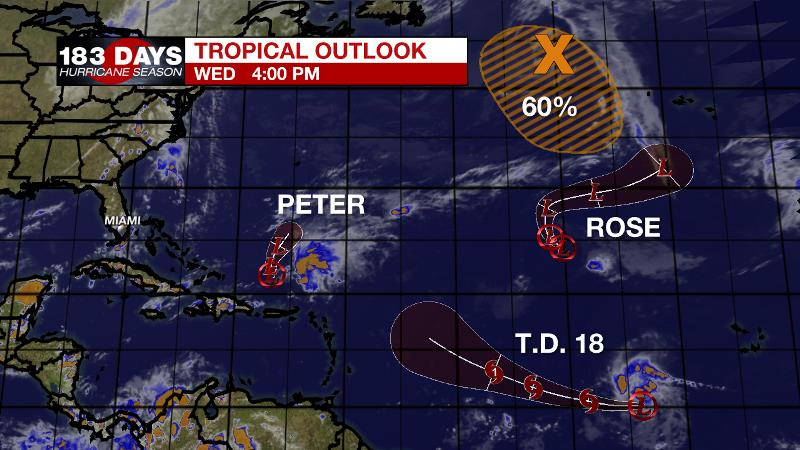 The Tropics: The tropics are busy, but not threatening to the United States. Tropical Depression Peter is struggling with wind shear north of Puerto Rico. It will move to the north, slow and degenerate to a remnant low soon. Tropical Depression Rose will meet a similar fate. It is barely hanging on in the eastern Atlantic Ocean. Tropical Depression Eighteen formed on Wednesday well east of the Lesser Antilles. It will strengthen into a tropical storm and then become Hurricane Sam by the weekend. At this time, it is forecast to remain out to sea. The remnants of Tropical Storm Odette over the north Atlantic have a 60 percent chance of acquiring subtropical characteristics as it drifts slowly south later this week. For the latest tropical forecasts, advisories and information, visit the WBRZ Hurricane Center as we navigate all 183 Days of Hurricane Season.

The Explanation: A deep, upper level low pressure system will move across the Great Lakes Region into the Mid-Atlantic States through the end of the week. The associated cold pool aloft will translate into unseasonably cool temperatures all the way into the Southeast U.S. and then another weaker trough will follow in its path to maintain the air mass through the weekend. At the surface, northwesterly winds will continue to usher in the coolest air since April. Dew point temperatures will fall from the uncomfortably sticky 70s into the dry and pleasant 50s. Beginning Wednesday night, a run of lows in the mid 50s is anticipated! Thursday through Sunday will be dry and comfortable with mainly clear skies, highs in the upper 70s to low 80s and lows in the mid to upper 50s. By early next week, a ridge of high pressure will build overhead and winds will turn around to the southeast leading to warmer afternoons. However, associated sinking air and a continued, unseasonably dry atmosphere will keep rain chances very low.