Typical, later summer weather is in store for much of the 7-Day Forecast. In more pressing matters, with a cold front on the forecast map for next week we all want to know, will it, or won’t it?

The Next 24 Hours: Skies will be mostly clear overnight with muggy low temperatures in the upper 70s.  Thursday will repeat a warm, humid afternoon with little in the way of rain relief. Temperatures will reach the 90s by 11am with feels-like temperatures nearing the triple digits. Highs will peak in the mid 90s during the afternoon.

After That: The week will conclude with a partly sunny afternoon and minimal convective activity. Highs will rise into the mid 90s with lows in the mid 70s. On Saturday, enough moisture and instability may be around for isolated, afternoon showers and thunderstorms to develop and this general pattern will continue through Tuesday. The forecast gets interesting beyond that, as a cold front will be up in the Midwest. 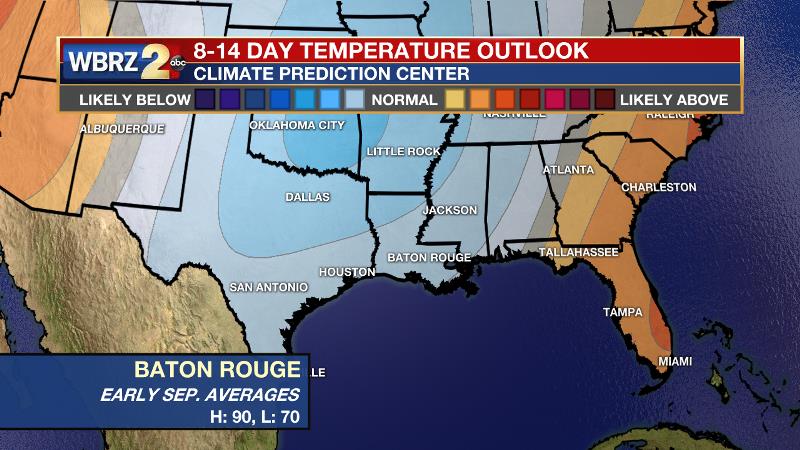 The European model shows the front staying north; the American model suggests it will pass through the area. If the American turns out correct, we could experience highs in the mid 80s and lows in the low 60s. It is too early to lean toward one model or the other. For what it is worth, the American model has shown more consistency than the European model with the forecast for the days leading up to this, which lends a bit bit credence to what it is saying about the longer term outcome. Regardless, it is too early to promise cooler temperatures, but we will anxiously watch!

Dropping temps in early to mid September is not *that* crazy. KBTR (@BTRairport) has recorded the first <65° reading earlier than next week twice in just the last five years. The average first occurrence since 1930 is September 6. #LaWX pic.twitter.com/xgiatGyZat

Here is a hopeful way to look at it: 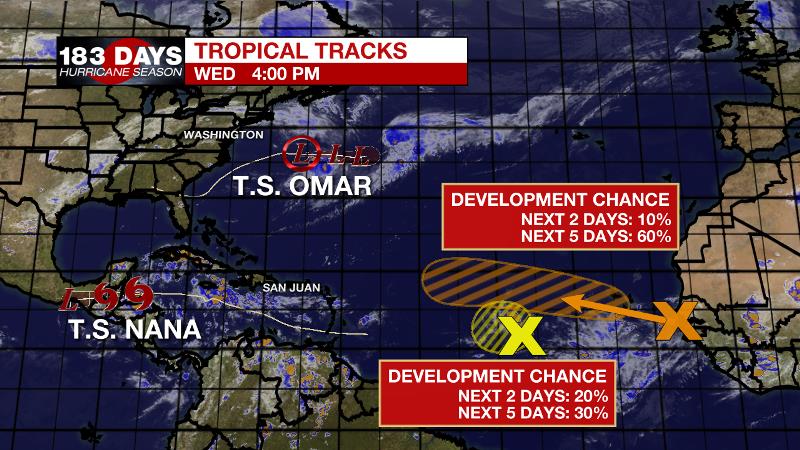 The Tropics: Tropical Storm Nana is expected to make landfall in Central America, possibly as a category one hurricane, early Thursday. Torrential rain and landslides are expected. This system will not affect the United States. In the north, central Atlantic, Tropical Depression Omar is expected to dissipate into a remnant low on Thursday. A small area of low pressure midway between the Windward Islands and west Africa has a 30 percent chance of formation in the central Atlantic. Another tropical wave is expected to move off the coast of Africa and merge with another disturbance southeast of the Cabo Verde Islands. There is a 60 percent chance of formation as this complex moves slowly westward over the eastern tropical Atlantic Ocean.

The Explanation: The Bermuda ridge of high pressure will remain over the southwest Atlantic and eastern Gulf of Mexico through Thursday. With much less moisture in the atmosphere and sinking motions induced by the ridge, rain coverage will be bleak. The opposite is true for heat. Feels-like temperatures will run into the low 100s thanks to a longer duration of sunshine and warmth and no shortage of late summer humidity. By Saturday a weak front will slip into the region and a bit more moisture will pool in the atmosphere ahead of that. With daytime warming, isolated showers and thunderstorms should be able to develop. The boundary will linger and diminish into early next week. Coincidentally, a weakness will open up between a ridge to the west and another to the east. This weakness of relatively lower pressure should allow isolated, afternoon showers and thunderstorms to remain in the forecast into early next week. A strong cold front will be moving south across the United States toward the middle and end of next week. Forecast models are split on whether or not this boundary will break into the Gulf of Mexico. If so, highs and lows could slide 5 degrees, or more, below average.