A ridge of high pressure along the northern Gulf Coast will keep onshore flow firmly established until a cold front arrives on Tuesday evening. A second, stronger cold front is expected Friday night.

Today and Tonight: For your Tuesday, high temperatures will be close to 90 degrees. A cold front will arrive during the late afternoon and early evening hours with increased cloud cover and isolated showers and thunderstorms. Between dusk and midnight, coverage may tick up to scattered immediately ahead of the boundary. One or two storms could tap available warmth and humidity to produce gusty wind, especially north and west of Baton Rouge. Winds will shift northwest behind the front, after midnight, and lows will slip into the low 60s as skies clear prior to daybreak.

Up Next: A few showers may linger near the coast through dawn Wednesday, but sunshine will return for the afternoon. High temperatures will be a few degrees cooler, still in the 80s, with lower humidity through Thursday. Late Friday, another cold front will swing through the area with scattered showers and thunderstorms continuing into Saturday morning. That second front will bring a better chance for rain and substantially cooler temperatures for the weekend into early next week.

The Mississippi River: At Baton Rouge, major flood stage continues with a level of 41’ as of Tuesday morning. The river is expected to fall slowly over the coming weeks. The high water is primarily an issue for river traffic and river islands, although some inundation will continue for a few spots north and south of Baton Rouge that are not protected by levees. Unprotected low-lying areas will be flooded and agricultural operations will be impacted on the west side of the river. The grounds of the older part of Louisiana State University's campus become soggy. This includes the area around the Veterinary Medicine building, the Veterinary Medicine Annex, the stadium and ball fields. The city of Baton Rouge and the main LSU campus are protected by levees at this level.

An area of surface high pressure over the Eastern Gulf will continue to promote increased warmth and humidity. North of the region, an upper level trough is diving southeast across the Great Lakes region and this feature will send a cold front into the local area. With a day of above average warmth and humidity, the front is expected to bring enough forcing to produce isolated to scattered showers and thunderstorms. Low level winds will not be favorable for rotating storms but enough instability will be present for gusty wind and downpours. Since daytime warming will be the primary ingredient aiding the front to produce precipitation, once night falls, rain coverage will wane. 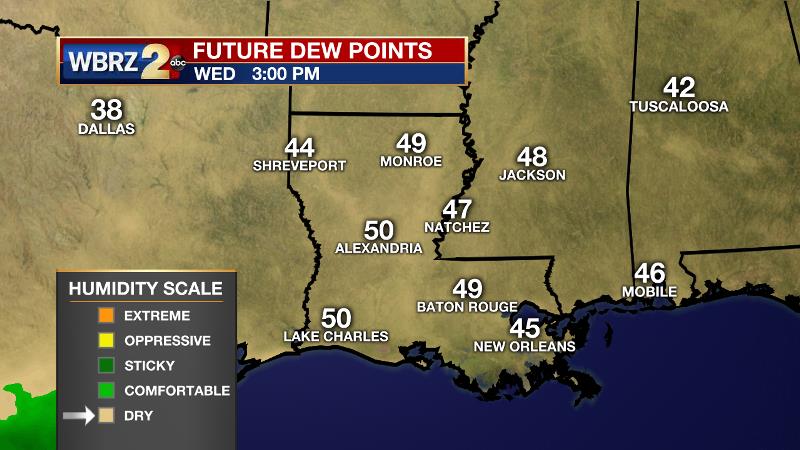 The front is expected to push offshore by daybreak Wednesday with dew point temperatures falling back into the 50s. This drier air will be felt through Thursday morning though afternoons will still be warm in the low 80s. South winds will take hold once again by Thursday night before yet another cold front moves in on Friday. This second cold front will bring a better chance of scattered showers and thunderstorms. It will also come with a much more robust continental air mass. Thermometers will be about 10 degrees below average for highs and lows next Saturday and Sunday. Record lows could occur on Sunday morning with isolated pockets north and east of Baton Rouge possibly dipping into the upper 40s.