After an unsettled day, unusually drier air will begin to spill into the region. A few comfortable mornings are ahead.

Today and Tonight: A cold front will bring scattered to widespread showers and thunderstorms across the area on Tuesday. Storms could bring brief downpours and gusty wind, but no significant issues are expected. Most of the action will occur from mid-morning to late afternoon, passing through the area from northwest to southeast. 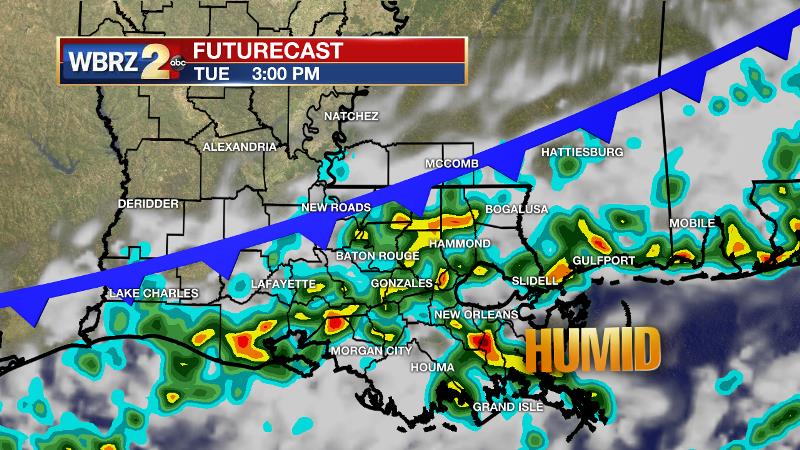 Temperatures will stay in the mid 80s and it will still feel humid. Overnight, winds will shift northerly as the front moves south. Skies will clear out by Wednesday morning with temperatures trying to sneak into the upper 60s.

Up Next: The front, which is really only a boundary between two air masses, will not have any noticeable cold air behind it, but much drier air will filter in and remove some of the stifling humidity. Wednesday afternoon will be warm but drier with high temperatures in the mid to upper 80s.  After a low in the mid 60s, a temperature change you will be able to feel, Thursday afternoon will repeat with sunshine and highs in the upper 80s. Steam and rain chances will come back by the weekend. A low, possibly with tropical characteristics, could develop along the formerly friendly, old front later this week or over the weekend. Should this occur, an area of increased rainfall is possible. See THE TROPICS and THE EXPLANATION for further details. 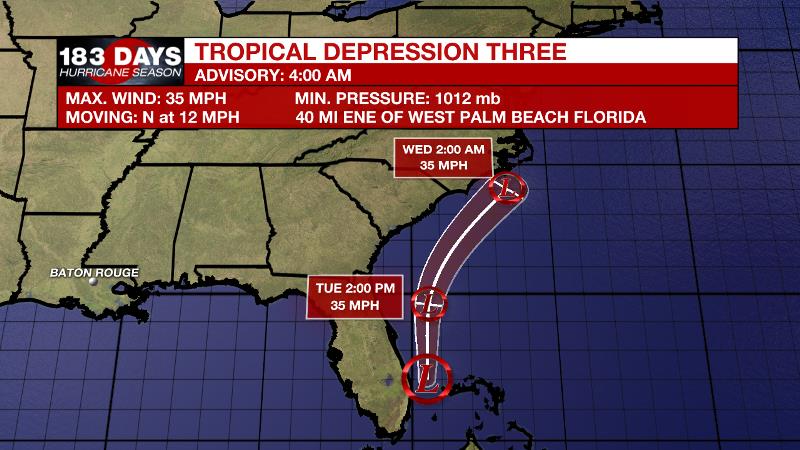 The Tropics: Tropical Depression 3 was positioned east of Palm Beach, Florida as of Tuesday morning.  With 35mph winds, the system was moving north at 10-15mph. Tropical Depression 3 will turn north, northeast increasing speed through Wednesday while remaining offshore. The system is not expected to strengthen and will dissipate by Thursday. Some higher surf and additional showers may be expected along the coast of the Southeastern United States.

The second item to watch will be the possibility of an area of low pressure forming along a decaying cold front in the Gulf of Mexico. If a surface low is able to develop, it could acquire some tropical characteristics and then send higher tides and rainfall across portions of the central and eastern Gulf Coast. Five day development chances are set at 20 percent.

The Mississippi River: At Baton Rouge, major flood stage continues with a level of 40’ as of Tuesday morning. Peaking at 44.1’ on March 19, the river set its 7th highest recorded crest at Baton Rouge. At 199 days, this year marks the longest period above flood stage at Baton Rouge. The level will slowly fall, but is likely to stay above flood stage for several weeks to come. The high water will remain an issue for river traffic and river islands, although some inundation will continue for unprotected low-lying areas. The city of Baton Rouge and the main LSU campus are protected by levees up to 47 feet. Some soggy areas and seepage may be noted due to the long duration of high water placing pressure on the levees. As some of the Mississippi River diverts into the Atchafalaya River, gauges at Krotz Springs and Morgan City will stay high as well. This creates backwater flooding in parts of Assumption Parish in areas such as Bayou Chene, Stephensville and around Lake Palourde.

A cold front is on the way and confidence is high that the boundary will make it all the way through our forecast area. Tapping the summer warmth and humidity, the front will activate scattered to widespread showers and thunderstorms on Tuesday. Severe weather chances will be low but high moisture content will mean that any persistent thunderstorms will be capable of he rainfall rates of 1 to 2 inches per hour. Fortunately, these storms will be moving at enough of a clip that nothing more than nuisance flooding is not anticipated. The front will pass through very slowly, taking until Wednesday morning to move offshore. By then, thermometers and dew points will back into the 60s signaling the arrival of more comfortable air. Highs will still warm into the upper 80s, so it will not feel cool but at least the humidity will not be oppressive. Onshore flow will be firmly restored over the weekend with seasonable humidity and rain coverage back in play. 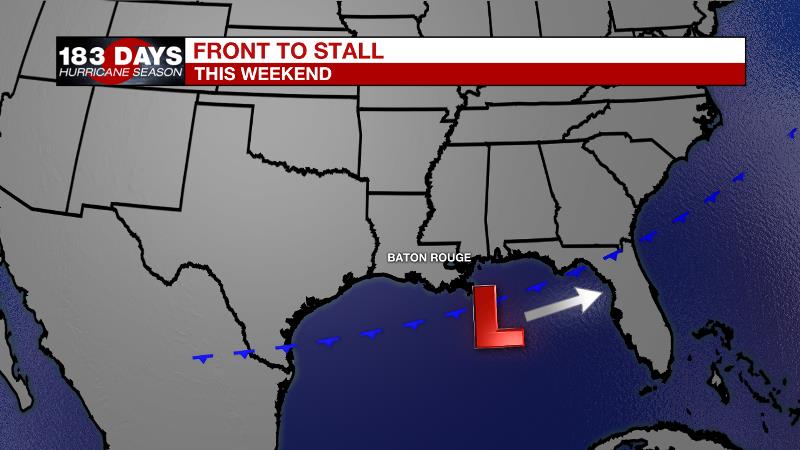