Severe thunderstorms possible Halloween night into Thursday morning will put an end to the current run of above average temperatures. The weekend forecast looks good.

Today and Tonight:  After morning fog, another nice and warm afternoon is ahead. Temperatures will climb into the mid 80s beneath sunny skies. Winds will be out of the southeast at 5-10mph. Overnight, an increase in cloud cover will begin and winds should be just high enough that less fog will develop. Lows will stop in the mid 60s so it will feel muggy early Wednesday.

It still looks like #BatonRouge area #trickortreat plans can go on as planned. An isolated shower is possible early, then the threat for severe thunderstorms will come overnight into Thursday. MORE: https://t.co/DUpUPQWEne pic.twitter.com/5bZB3UhJQh

Up Next:  A cold front will approach the area on Halloween. It will be a close call on trick-or-treat time with regard to the showers and thunderstorms. While isolated to scattered showers may be able to form Wednesday afternoon into the evening, right now, we are expecting a squall line to be the main mode of precipitation from 2am – 8am Thursday. Some of the thunderstorms could be severe with damaging wind gusts and downpours, but an isolated tornado cannot be ruled out either. The front will clear the area quickly, allowing rain to end during the afternoon hours of Thursday. Clear, cool conditions will move in behind the front, with highs near 70 and lows near 50 Thursday through Saturday. 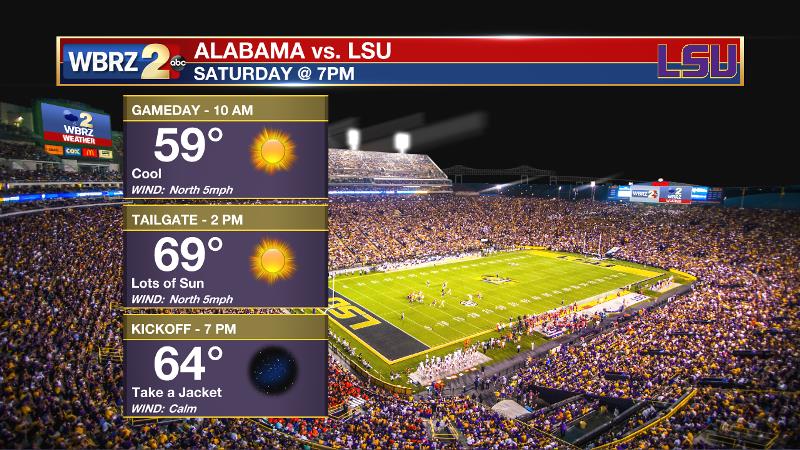 LSU vs. Bama: True football weather appears to be in store for the showdown in Tiger Stadium. The masses attending ESPN’s College Gameday on Saturday should enjoy sunny skies and cool temperatures. The afternoon high will nudge close to 70 degrees beneath sunny skies. While it may warm enough for short sleeves during tailgating, you will want a jacket heading into the game as thermometers fall into the lower 60s by the end of the game. Geaux Tigers. 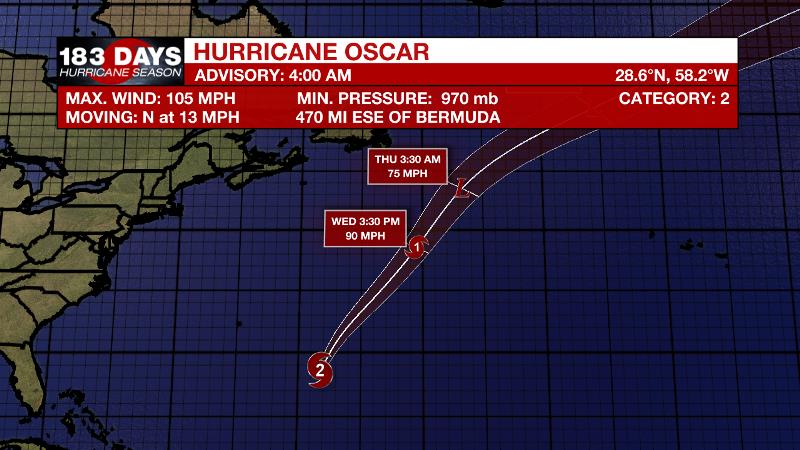 The Tropics: Hurricane Oscar is now packing 105mph winds and a minimum central pressure of 970mb over the central Atlantic Ocean. The storm is sending heavy surf towards Bermuda. Oscar is forecast to begin moving toward the north or north-northeast with an increase in forward speed through Wednesday and become a powerful extratropical storm. It poses no immediate threat to land at this time.

The next major weather feature will be a cold front forced into our region by a mid-level trough advancing from the Midwest to Southeast Wednesday into Thursday. The front will become very progressive moving eastward by Wednesday afternoon or early evening. At this time, uplift along the boundary will consolidate showers and thunderstorms into a squall line through Louisiana and Mississippi. There is the possibility of a few showers well ahead of the front Wednesday evening over the western half of the area but they should not be widespread and most trick-or-treating should go by dry and safe. The squall line will cross the Baton Rouge area between midnight and dawn and be east of the local area by Thursday afternoon. There will be the possibility of a few if not several severe thunderstorms along this line. All modes of severe weather will be possible with this scenario but the greatest threat will be straight line, damaging winds. The Storm Prediction Center has placed most of the region in a 1/5 “marginal risk” for severe thunderstorms, but areas north and west of Baton Rouge are under a 2/5 “slight risk.” Additionally, the front will squeeze out 1-2 inches of rain over a short time meaning that areas of poor drainage may experience flooding, but this will not be unlike that of a summer downpour. 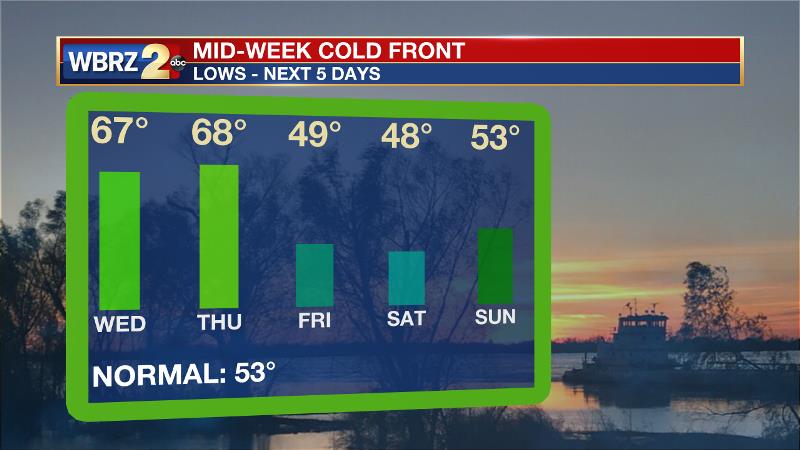 Clouds and light rain could linger into Thursday afternoon once the front moves through. Clear, cool, dry weather will then be in the forecast through Sunday morning.