Many of the next several days will see scattered showers and thunderstorms—especially in the afternoons. However, daily coverage will not be as extensive as previously thought and total rainfall amounts will be lower. 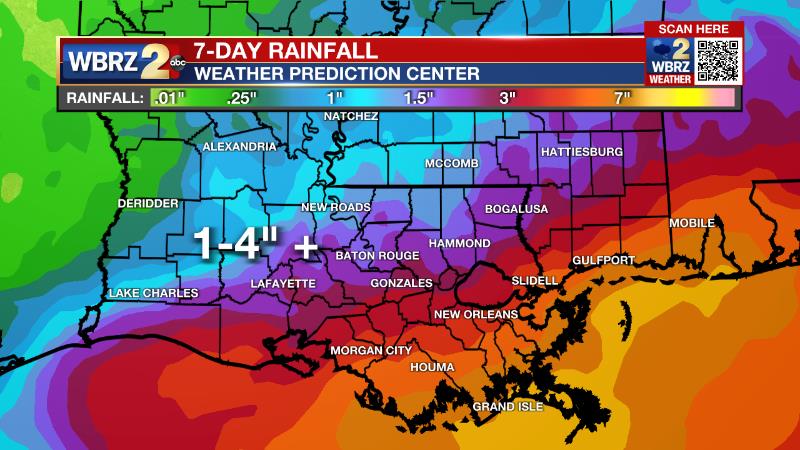 Up Next: The weak front and an area of low pressure will meander near the southeast Louisiana coast through the end of the week. This feature is not likely to become a tropical system, but will play a role in the forecast for a few days. Thursday through the weekend, the presence of the low pressure will work with daytime heating to pop off scattered showers and thunderstorms. Common in the summer season, any thunderstorms will be capable of dropping a lot of rain in a short time, which could lead to some street and poor drainage flooding. The overall rainfall forecast has been pared back and is now for about 1-3 inches across the 13 parish, 3 county forecast area around Baton Rouge. The highest amounts will occur south and east of the city with the lowest amounts north and west of the city. As usual, some small point locations could receive much higher amounts, but on the whole, these totals will be manageable. CLICK HERE for your detailed 7-Day Forecast. 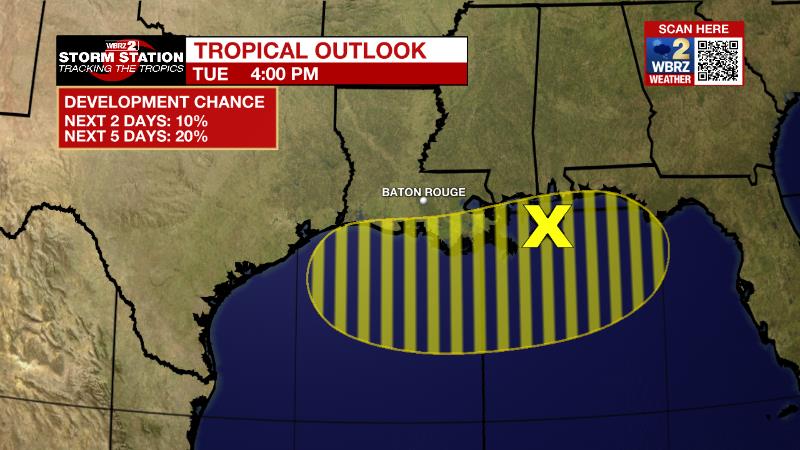 The Tropics: A couple of weak low pressure systems embedded along a surface trough are producing disorganized showers and thunderstorms over the northern Gulf of Mexico, with some of that activity now spreading inland over the Florida Panhandle. The surface trough is expected to meander near the northern Gulf coast through the end of the week. There is a 20 percent chance of development only if it remains over water during that time.

The Explanation: A weak trough of low pressure draped over the northern Gulf of Mexico will remain a trigger point for showers and thunderstorms to develop over the next several days. However, dry upper level air surging into the region from the north has been fighting against the convection developing closer to the coast and making it hard for any sustained growth further inland. Finally, tropical development along the trough looks unlikely. These three items make for a tricky forecast moving forward. However, the trend is for less rain as compared to previous forecasts. A weak front may be driven into the region on Wednesday and Thursday providing some additional lift for showers and thunderstorms. Most of the activity over land will still need daytime warming to get going and so this will be primarily afternoon activity. A very stagnant pattern looks to set up across the country for the weekend and beyond. A weak upper level trough of low pressure will remain in the Southeast and that will promote enough instability for daily pop-up showers and thunderstorms. Any given day, about 30-60 percent areal coverage is anticipated with any thunderstorms capable of downpours. Through early next week, generally 1-3 inches of rain is expected with isolated higher amounts. Some minor poor drainage flooding is possible where this occurs.