A couple of fast moving frontal systems are expected through the weekend. Due to that, another freeze could be racked up in Baton Rouge.

The Next 24 Hours: A low pressure system and cold front will move through overnight with periods of rain and possibly some embedded rumbles of thunder. The most likely time for precipitation will be between around midnight. While rain could fall moderately at times, amounts should remain under a half inch for most. Low temperatures will be in the low 40s. Northwest winds will be reinforced on Wednesday, transporting more dry, cold air into the region. Even as clouds break by afternoon, sun will only be able to warm temperatures into the low 50s.

After That: A quiet and chilly end to the week is expected. Low temperatures have the potential to reach freezing on both Thursday and Friday mornings, though Thursday will be the colder of the two. Each morning could also have some frost. Afternoons will be sunny and cool with highs ranging from the mid 50s to low 60s. The next storm system will arrive over the weekend and this one looks like a mainly nocturnal event. Right now, the expectation is for showers and a few thunderstorms to move through Saturday night, although at 4 days away, that timing is still subject to change. CLICK HERE to view your complete 7-Day Forecast.

A shortwave trough of low pressure will move over the local area into Wednesday morning with an associated surface low pressure and cold front sweeping through as well. Mainly rain showers are anticipated overnight, though a rumble of thunder is possible. Rain totals should stay between 0.25 – 0.75” at most. As the trough axis swings east on Wednesday, the atmosphere is expected to dry quickly. Some sun will return as a result but continued northwesterly winds will result in a chilly day with highs in the low to mid 50s. Clear skies and light winds set up for optimal radiational cooling and perhaps freeze number three for the Baton Rouge Metro Area. Even if not quite that low, frosty conditions should prompt sensitive plant protection. A weak upper level trough will move north of the area Thursday night keeping the cooler temperatures around for another day with near freezing temperatures Friday morning. Another upper level trough will race across the southern third of the U.S. over the weekend. Since this system remains over the Pacific Ocean, weather balloons are not yet collecting the best data for models and therefore timing is subject to change. However, at this time, the frontal system is expected to primarily affect the region late Saturday into early Sunday with showers and a few thunderstorms. Severe weather does not appear to be a threat at this time, though the speed of the system, and therefore how much rain occurs, is still in question. Cooler temperatures will follow into Christmas week. 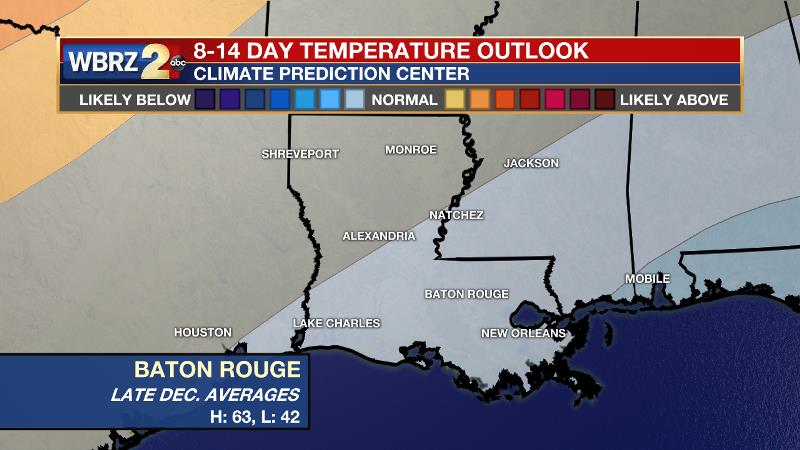 Speaking of the holiday, the 8-14 outlook from the Climate Prediction Center features the Southeast U.S. as one of the only locations that might expect below average temperatures. Those average for the time of year are highs in the low 60s and lows in the low 40s. It might be a nice change for many that remember warm temperatures on Christmas over the last few years. Still, this is far enough away for changes as well, so stay in touch!