We start this week just like any other mid-summer week with the persistent heat and humidity coupled with scattered showers, a few thunderstorms and the potential for localized heavy rain, but some actual relief is in sight.

Today and Tonight: Expect another round of showers and thunderstorms with isolated downpours. Overall, a bit more action is likely south of the highways today. High temperatures will be in the upper 80s and followed by lows in the mid 70s. 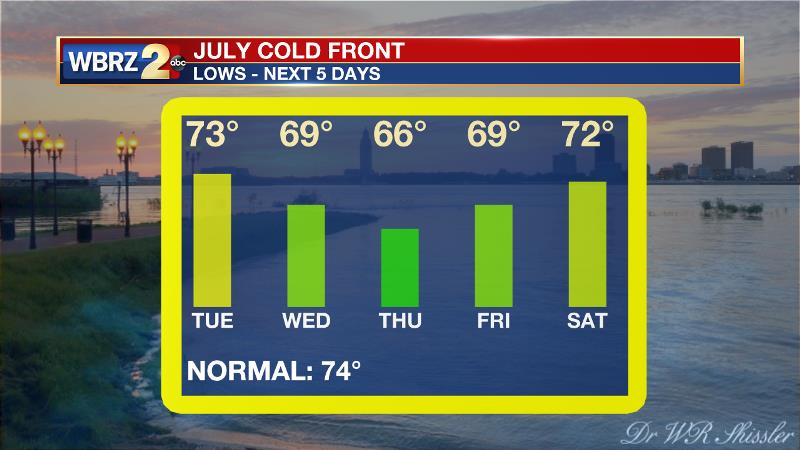 Up Next: The rest of the week will turn out far from what would be a normal summer pattern as a cold front is expected to make an appearance on Tuesday. This front, which is really only serves as a boundary between two air masses, will not have any noticeable cold air behind it, but much drier air will filter in and remove some of the stifling humidity. The front will pass on Tuesday afternoon bringing a round of showers and thunderstorms. Comfortable, dry and sunny conditions are then expected Wednesday and Thursday with both mornings beginning in the 60s! 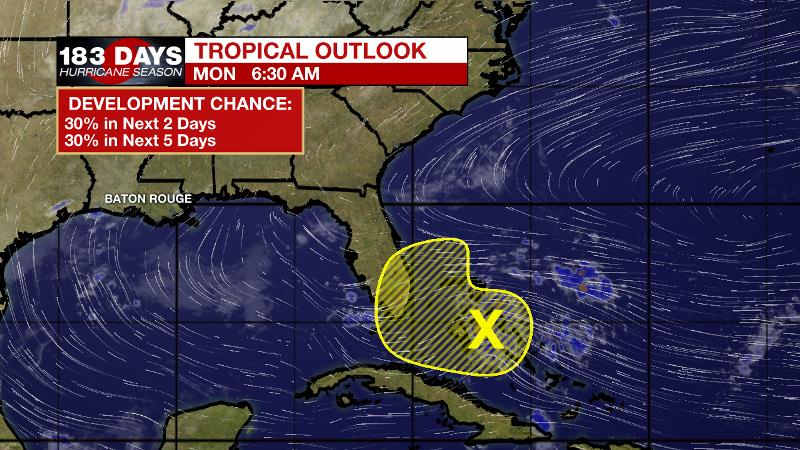 The Tropics: A trough of low pressure moving through the Central Bahamas is producing a small area of showers and thunderstorms mainly along and to the east of the trough axis. This disturbance is given a 30 percent chance of development over the next five days before it encounters strong upper-level winds.

The Mississippi River: At Baton Rouge, major flood stage continues with a level of 41’ as of Monday morning. Peaking at 44.1’ on March 19, the river set its 7th highest recorded crest at Baton Rouge. At 198 days, this year marks the longest period above flood stage at Baton Rouge. The level will slowly fall, but is likely to stay above flood stage for several weeks to come. The high water will remain an issue for river traffic and river islands, although some inundation will continue for unprotected low-lying areas. The city of Baton Rouge and the main LSU campus are protected by levees up to 47 feet. Some soggy areas and seepage may be noted due to the long duration of high water placing pressure on the levees. As some of the Mississippi River diverts into the Atchafalaya River, gauges at Krotz Springs and Morgan City will stay high as well. This creates backwater flooding in parts of Assumption Parish in areas such as Bayou Chene, Stephensville and around Lake Palourde.

A cold front is on the way and confidence is now high that the boundary will make it all the way through our forecast area. Tapping the summer warmth and humidity, the front will activate scattered to widespread shows and thunderstorms. Severe weather chances will be low but a very high moisture content will mean that any persistent thunderstorms will be capable of he rainfall rates of 1 to 2 inches per hour. Fortunately, these storms will be moving at enough of a clip that anything beyond nuisance flooding is not anticipated. The front will pass through very slowly, taking until Tuesday night to move offshore. By Wednesday morning, thermometers and dew points will back into the 60s signaling the arrival of more comfortable air. Highs will still warm into the upper 80s, so it will not feel cool but at least the humidity will not be oppressive. The front may retreat far enough inland on Friday and Saturday to force out a few extra showers and thunderstorms before it diminishes entirely. Onshore flow will be firmly restored over the weekend with seasonable humidity and rain coverage back in play.