The weekend will begin with the coolest temperatures since April 17, 2020. At 49 degrees, that was the last time the Capital Area was below 50 degrees.

The Next 24 Hours: Overnight will be clear and cool. Lows will stop around 48 degrees with light east winds. A beautiful, fall-like Saturday is ahead. In response to ample sunshine, highs will chug back into the mid 70s.

After That: As winds turn southerly on Sunday, morning lows in the upper 50s will run into the 80s on a mostly sunny afternoon. The forecast for next week is tricky if not uneventful. There will be enough surface moisture to feel a little stickiness and perhaps generate a stray shower or two during the afternoons. However, the atmosphere is drier this time of year so nothing widespread or heavy is expected. The daily rain coverage should not exceed 20 percent through Wednesday. Temperatures look to remain above average through the week with highs in the 80s and lows in the 60s. By the end of the week, a front could approach for a little better shot at rain followed by cooler temperatures next weekend. 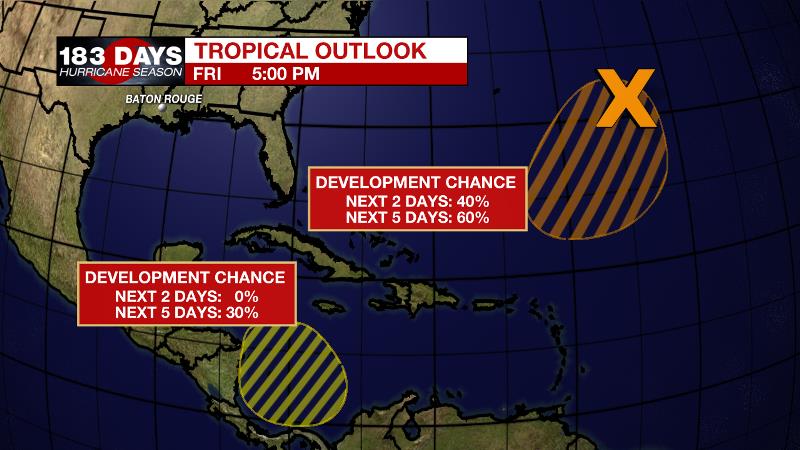 The Tropics: Shower activity has become better organized in association with a broad non-tropical low pressure system located about 600 miles southeast of Bermuda. Additional development of this system is expected, and a there is a 60 percent chance that a subtropical or tropical depression could form during the next few days while the low meanders over the central Atlantic.

Another broad area of low pressure could form by early next week over the southwestern Caribbean Sea. There is a 30 percent chance of formation as it drifts slowly northward.

The Explanation: With a surface high pressure situated over the Ohio Valley, clear skies and light easterly winds are anticipated into Saturday morning. Beneath clear skies, the area appears poised for the first lows in the 40s of the season. The surface high will move off the East Coast by Sunday and a southeasterly wind shift will restore surface moisture and warmer than average temperatures into next week. The surface moisture may be enough to fuel a stray, low shower or two Sunday or Monday, but the atmosphere is inherently drier this time of year, which will likely win out, and keep us rain free. By the middle of next week, the area is likely to be positioned between two weak upper level ridges and that could amp up just enough instability to generate isolated showers. By the end of next week, there is some forecast model disagreement on how the pattern materializes. Without digging too deep, both major global models present the idea of a cold front and therefore increasing rain chances. Timing and strength will become clearer as we get closer. Either way, the cold front and associated upper level pattern should deflect any tropical trouble away from the Gulf.