While a few showers and thunderstorms remain in the forecast, the overall trend of the next several days will be less and less activity. Lower rain coverage will result in high temperatures easily reaching the low 90s—especially by next week.

Next 24 Hours: Compared to last night, showers and thunderstorms will diminish much more quickly after dark. Beneath partly cloudy skies, low temperatures will dip into the upper 60s and low 70s. Saturday will be partly sunny and warm with thermometers hitting the low 90s by mid-afternoon. For the one or two spots in the viewing area that see a pop-up shower, the high temperature could bust slightly lower in the upper 80s.

Up Next: A weak, upper level disturbance will fuel some additional showers and thunderstorms on Sunday afternoon. Temperatures will be typical of the time of year with highs in the low 90s and lows in the low 70s. Early next week, the upper level pattern may change just enough to reduce the afternoon activity and make showers very scarce. However, the tradeoff to drier afternoons in June is much higher heat, and some thermometers could top out in the mid 90s Monday through Wednesday. CLICK HERE for your detailed 7-Day Forecast. 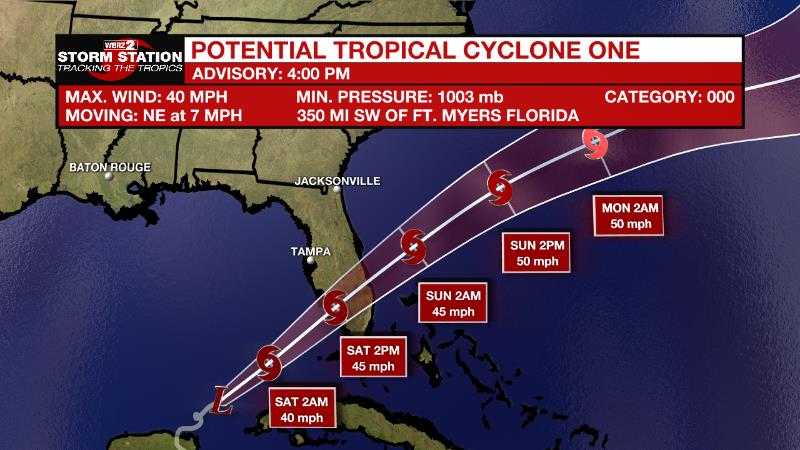 The Tropics: Potential Tropical Cyclone One is moving a little faster toward the northeast at 7mph, spreading heavy rain across Cuba and Florida. As of 4pm Friday, the system was producing maximum sustained winds of 40mph. A northeastward motion with an increase in forward speed is expected during the next couple of days. On the forecast track, the system should move across the southeastern Gulf of Mexico tonight, across the southern and central portions of the Florida Peninsula on Saturday, and then over the southwestern Atlantic north of the northwestern Bahamas late Saturday through Sunday. The potential tropical cyclone will continue to produce heavy rain and wind gusts over 40mph across western Cuba through today. Heavy rain will begin to affect Central Florida, South Florida and the Keys today through Saturday, and affect northwestern Bahamas tonight through Saturday.

The Explanation: Northwest winds in the upper levels of the atmosphere will remain in place through the weekend. A few weak disturbances in this flow could support the development of showers and thunderstorms as we reach peak daytime warming. However, moisture in the atmosphere may be rather limited, which will result in a little less activity than previous days. Of the two days, a bit more moisture will be available Sunday, making it the more likely of the two to produce showers and thunderstorms. Of course, as the support of daytime warming is lost, activity will wane in the evening hours. An upper level ridge of high pressure will expand over the area on Monday and be the dominant weather feature through much of next week. Despite warm and humid surface air, sinking motions aloft will result in very little convective activity with rain coverage not much better than 10 percent any afternoon through Wednesday. In response to more sunshine, high temperatures will have no problem reaching the low and perhaps mid 90s. As the ridge starts to weaken by the end of next week, lake and sea breezes will help initiate a few more afternoon showers and thunderstorms on Thursday and especially Friday.