Why does a lunar eclipse make the moon red?

If you were one of the millions of people that looked up at the moon last night to view the Lunar Eclipse, or was bombarded by pictures on social media today, you may have noticed that the moon appears reddish. How does the earth’s shadow cast a red hue on the moon, but your body’s shadow casts a full silhouette on the ground with no shade of red? It all has to do with Earth’s atmosphere, and how the sun’s rays are bent around the Earth.

Image: A lunar eclipse takes place when the sun, Earth, and moon line up in space. The moon passes through Earth's shadow. 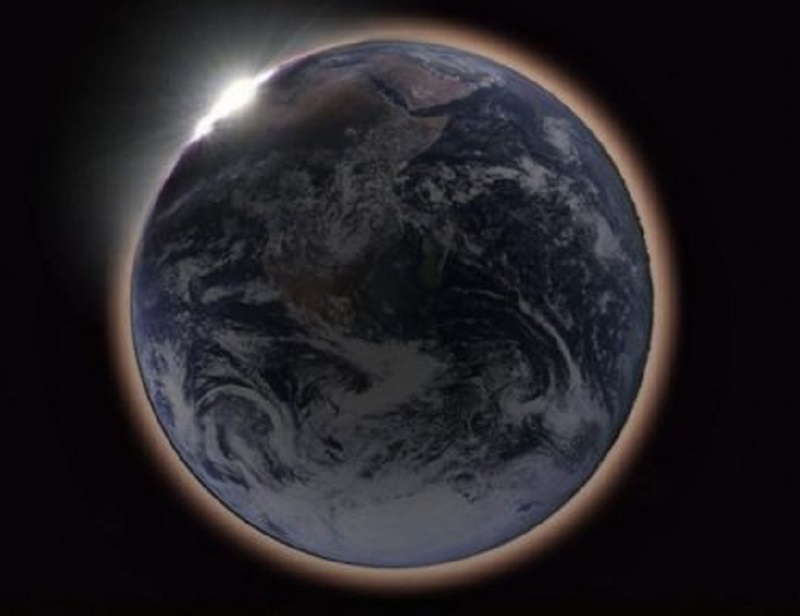 Image: A combination of images taken by the Apollo astronauts and the Japanese lunar probe Kaguya during the lunar eclipse in 2009. The pink ring around the Earth is our atmosphere aglow with the combined light of all the sunrises and sunsets on the planet.

Sunlight is comprised of a range of frequencies that are associated with color. Shorter wavelengths are blue, and as the wavelength gets longer, the associated color transitions to green, then yellow, and finally red. Raleigh Scattering is the process of these wavelengths colliding with air molecules in the atmosphere, and scattering outward in all directions. It’s the reason that the sky is blue, and that the sky appears more yellow-red during sunrise and sunset. The blue wavelength is so short that it is scattered by air molecules as it interacts with the Earth’s atmosphere. This interaction scatters the incoming blue wavelength, causing the sky to be blue through much of the day on clear days. The only time that it is not necessarily blue is during sunrise and sunset. During these times, the sunlight’s path takes a lengthier journey through the atmosphere, making it possible for the longer wavelengths of yellow and red to be scattered and be prevalent in the sky. 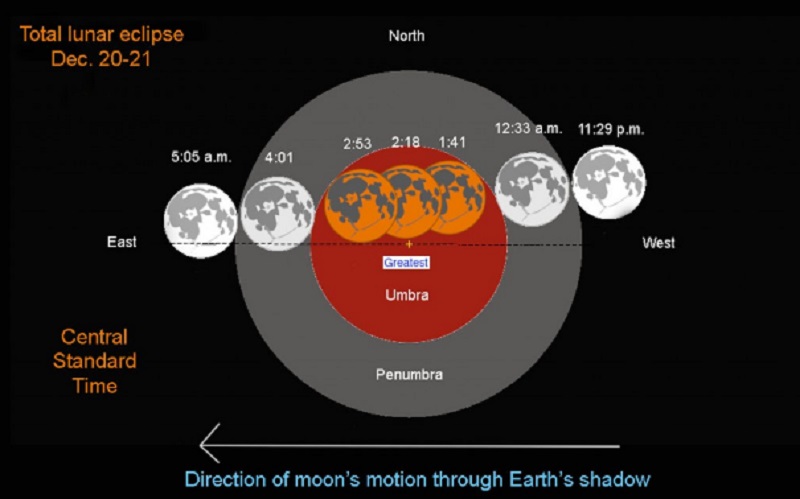 Image: This diagram shows the moon at different times during the eclipse.

This is the same reason that the moon appears reddish during a lunar eclipse. The sunlight is bent, or refracted, around the Earth’s surface to project the longest wavelengths (red) onto the moon surface. The reddish color projected onto the moon’s surface ranges from copper-colored to deep red, depending on conditions of the Earth’s atmosphere at the time of the eclipse. Conditions include the amount of dust, clouds, and humidity that are present at the edge of Earth’s atmosphere. The Earth can even completely block out all wavelengths if volcanic ash and heavy dust are in the atmosphere, resulting in the moon turning dark during the eclipse. The Danjon Scale breaks up the moons appearance and luminosity into 5 categories. It was developed by Andre-Louis Danjon in 1921 when hypothesizing that the brightness of a lunar eclipse was related to the solar cycle.

If you missed this year’s total lunar eclipse, have no fear! The next one will include the eastern half of the U.S. on May 15-16, 2022. The next full lunar eclipse that will encompass the entire nation will take place on March 13-14, 2025. 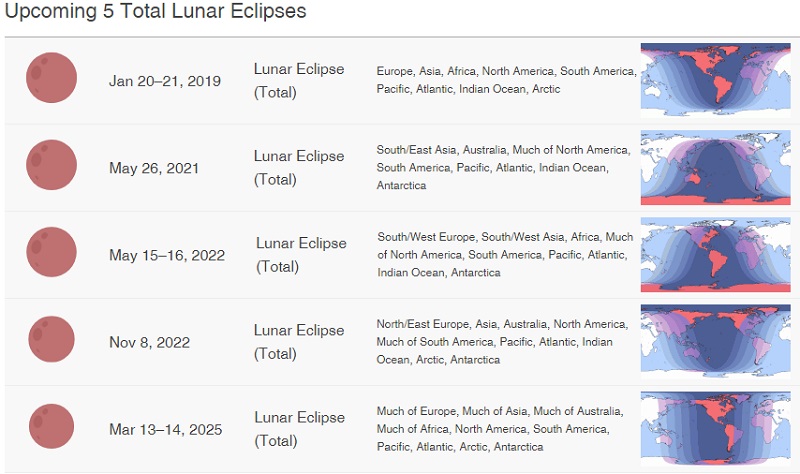 Image: The dates and locations of the next 5 total lunar eclipses.