Heat relief in the form of more showers and thunderstorms is upon us. The climatological peak of hurricane season is getting closer and a current look at the Atlantic Basin confirms it.

Next 24 Hours: Showers will run out of gas by midnight followed by gradually clearing skies. Thermometers will pause in the mid 70s. Wednesday will be a transitional day. Temperatures will still climb into the low to mid 90s but there should a continued uptick in the coverage of afternoon showers and thunderstorms. Action should begin between 1-2pm, which will also cut down on the duration of oppressive heat.

Up Next: Thursday and Friday, many more locations will receive rain and this will cut back on the sustained heat across the area. High temperatures will be closer to seasonal averages in the low 90s with low temperatures remaining in the mid 70s. Humidity, unfortunately, will not be breaking any time soon. As usual for late August, we are monitoring the tropics. A disturbance will trek across the Gulf of Mexico this weekend and early next week. That system will send deep tropical moisture over the area and keep rain coverage high Sunday through Tuesday. As of now, a manageable 1-3 inches of rain is forecast over the next 7-days but higher amounts projected to the southwest could be in play for us with any small changes. It is too early to determine if that system will be well organized, or just a rainmaker. CLICK HERE for your full 7-Day Forecast. 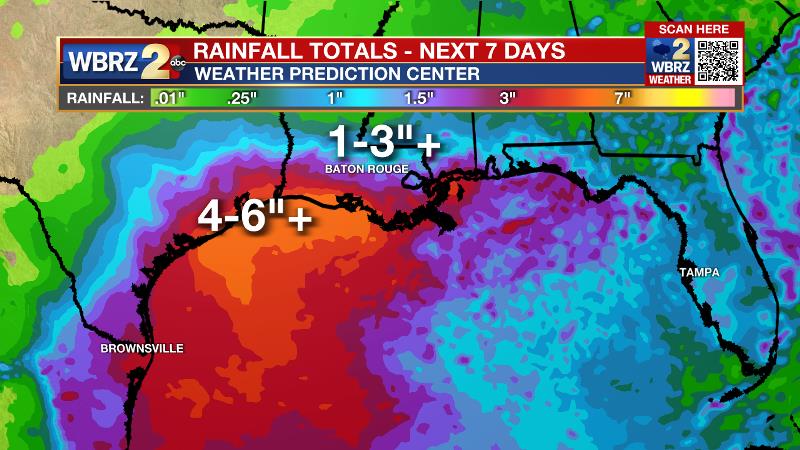 The Tropics: A broad area of low pressure is expected to form over the southwestern Caribbean Sea in a couple of days. If the low remains over water, there is a 60 percent chance that a tropical depression could form near the Yucatan Peninsula of Mexico, by Sunday. This system could enter the Gulf of Mexico after that. More discussion on this system can be found below.

A broad trough of low pressure is producing disorganized showers and thunderstorms over the central tropical Atlantic almost 1000 miles east-northeast of the northern Leeward Islands. There is a 70 percent chance that a tropical depression forms by the end of the week as this system spins over the open central Atlantic.

Another tropical wave over the far eastern tropical Atlantic located a few hundred miles south-southwest of the Cabo Verde Islands is producing a concentrated area of showers and thunderstorms.  There is just a 30 percent chance of formation for this system because upper-level winds are forecast to become too harsh by the weekend. 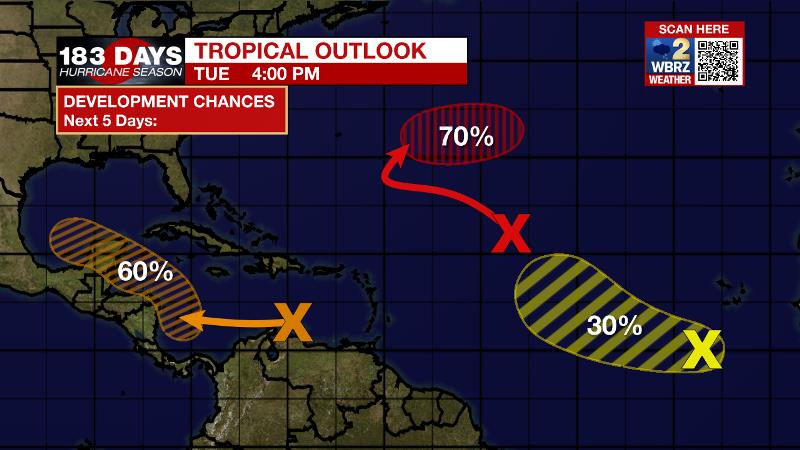 The Explanation: There will be no shortage of steam on Wednesday before showers and thunderstorms develop. This should happen early enough in the day that the National Weather Service will not need to issue another heat advisory. An upper level ridge, the culprit for the recent hot stretch, will drift farther northwest and cause easterly steering winds. Wednesday through Friday, these westbound showers and thunderstorms will develop by mid-afternoon and be capable of downpours, frequent lightning and gusty wind. A disturbance moving out of the Caribbean Sea and northwest across the Gulf of Mexico will bring a plume of deep tropical moisture across the area Sunday through Tuesday of next week. Thanks to this, scattered to widespread showers and thunderstorms will stay in the forecast and any of them could cause isolated street and poor drainage flooding. In addition to the slug of moisture, forecast models and the National Hurricane Center suggest some potential for tropical development. The most common theme is a system moving due northwest across the Gulf of Mexico and ending up near the Texas Coast, however, there are scenarios that involve Louisiana and Mexico as well. It is too early to focus specifics, rather, remain prepared as we near the peak of hurricane season. Either way, heavy rain could be an issue late weekend into early next week.