Tuesday PM Forecast: dry stretch about to end, for some

There was a “trace” of rainfall measured on September 19 making it 32 days without substantial rain which last fell on September 9. That streak is expected to be broken tomorrow.

Next 24 Hours: Clouds will steadily increase through the overnight hours as moisture returns to the atmosphere. With light, south winds, increasing dew points and insulating clouds, low temperatures will stop in the mid to upper 60s. A shower is possible as early as daybreak on Wednesday but more scattered showers and thunderstorms can be expected from late morning to late afternoon as high temperatures warm into the mid 80s. As far as rain goes, unfortunately, not all locations will get wet and there will be intervals of sunshine throughout the day. A cold front will roll in overnight with one final broken band of showers.

Up Next: Any activity is expected to end around or before dawn Thursday. Drier conditions are anticipated for the remainder of the week with near average temperatures—which is highs near 83 and lows near 60 this time of year. A stronger cold front will blow through on Monday. Not only will this system provide another chance for showers and thunderstorms but also bring the coolest temperatures so far this fall season. Expect high temperatures in the low 70s and low temperatures in the mid 40s next week. CLICK HERE for your detailed 7-Day Forecast. 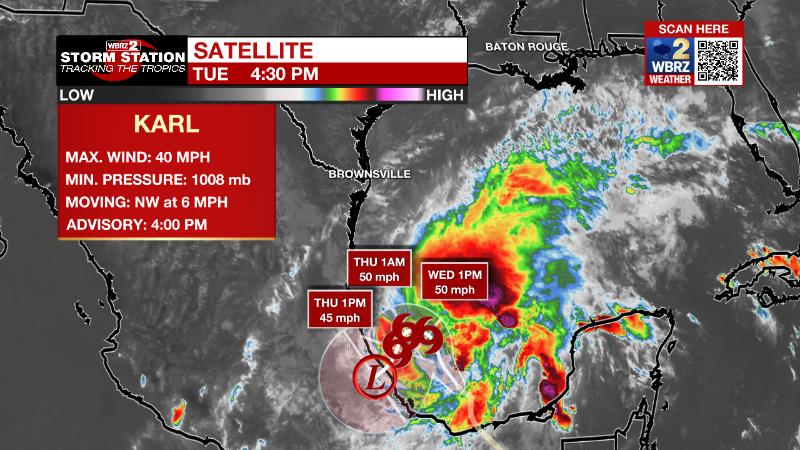 The Tropics: Tropical Storm Karl formed in the Bay of Campeche. As of Tuesday afternoon, Karl was moving northwest at 6mph with maximum sustained winds of 40mph. Karl will gradually strengthen over the next few days while turning west and then southwest before making landfall in Mexico Thursday.

The Explanation: A few showers and thunderstorms will attempt to break out near dawn on Wednesday in response to moisture fully saturating the atmosphere. Later in the morning, a disturbance moving into the upper levels of the atmosphere coupled with favorable low level winds will generate more scattered showers and thunderstorms. There is no significant threat for any severe weather, but a few of the storms could produce downpours. Since the area has been so dry of late, rain may not easily saturate into the dry ground and there could be some brief runoff issues. Rain coverage and intensity will quickly lessen into the evening hours and as the main upper level trough axis pushes east it will send a cold front through the region. A last skinny band of showers is possible with the boundary. Thursday through the weekend, drier air will infiltrate the atmosphere leasing to mainly clear skies with warm afternoons and cool nights. 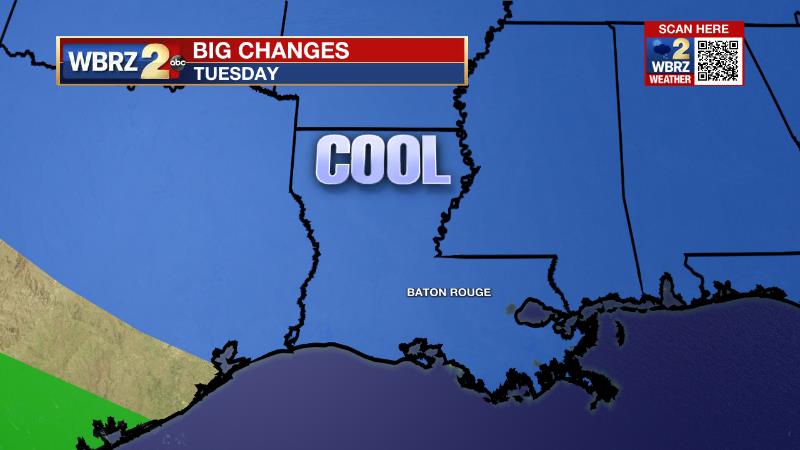 By Sunday, a deeper upper level trough of low pressure will swing through the Midwest and into the Eastern U.S. This trough will drive another front into the region with another shot at showers. More glaring is what could be an extensive drop in temperatures after the front. Model guidance is confidently policing high temperatures in the low 70s with low temperatures in the 40s.