The Rockets and their Red Glare

It may not be your pet’s favorite holiday, but the arrival of Independence Day is one that is filled with patriotism, fellowship, and cookouts. Fourth of July celebrations are not complete without capping it off with fireworks after sunset, but what makes the “Ohh’s” and “Ahh’s” so special? Whether it is a professional fireworks display, or your local neighborhood’s pyrotechnical specialist – It’s all about chemistry and science!

Historians believe that the Chinese stumbled upon the first natural firework as early as 200 B.C.. They would place bamboo stalks in a fire pit, which explodes when its hollow air pockets in the stalks are heated. They primarily did this in order to ward off even spirits. It was not until between 600 and 900 A.D, that Chinese alchemists mixed saltpeter (potassium nitrate), charcoal, and sulfur together to create an early form of gunpowder. They began to pack the black powder into the bamboo shoots to enhance the natural blast of the air pockets. By 1200, China began to use gunpowder militarily in order to build the first rocket cannons, effectively aiming and blasting projectiles at their enemies. However, after the battles, they would use this same technology to aim the cannons upward in order to produce the first aerial firework displays. 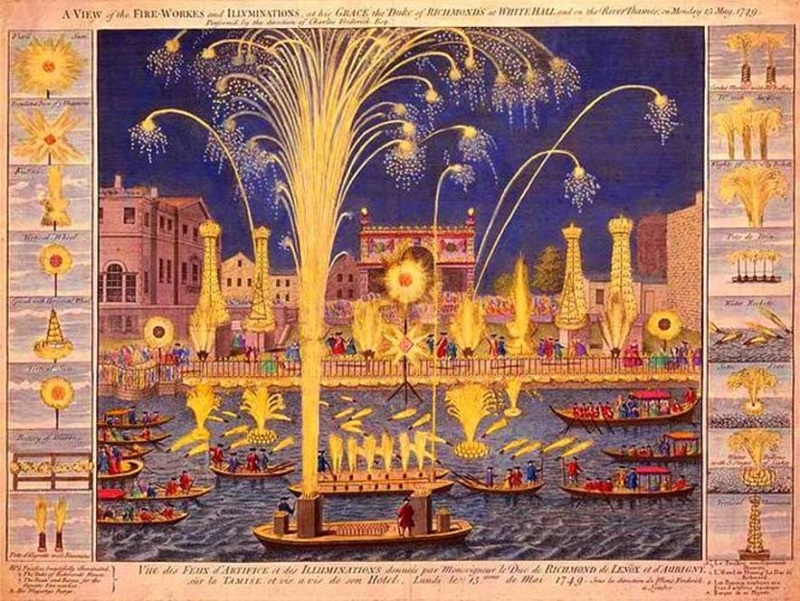 Fireworks Over the River Thames, 1797

Between 1200 and 1600, gunpowder began to travel west through Arabia and Europe by way of diplomats, explorers, and European missionaries. The aerial fireworks still were only orange, but that was all to change as the technology reached Italy. European rulers became big fans of the displays, usually helping to celebrate important dates, military victories, or events. In fact, England's James II’s royal firemaster was knighted due to his amazing presentation for the king’s coronation. 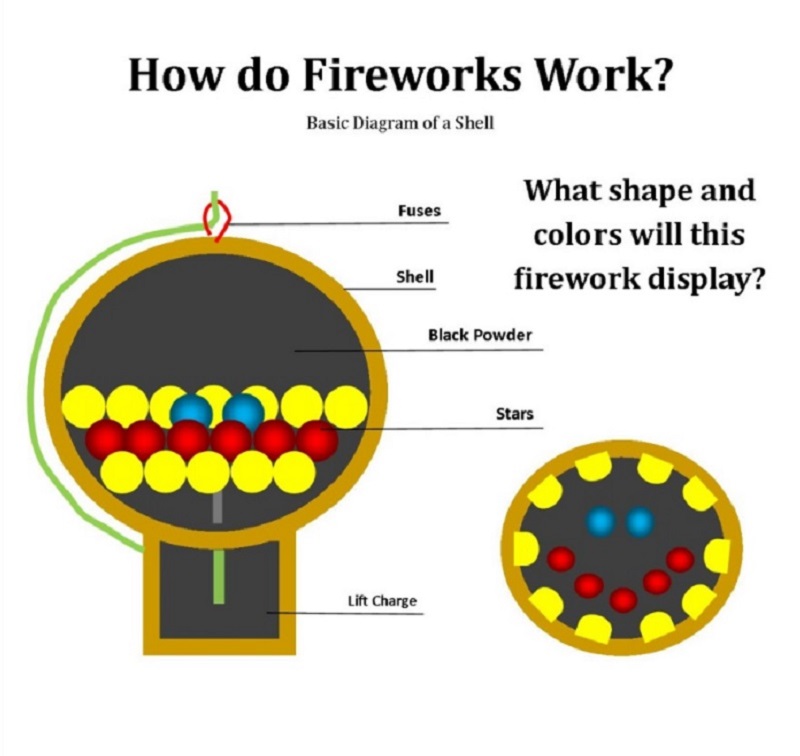 Diagram of what is inside the shell of a mortar firework.

It was shortly after 1600, when chemistry got involved in order to create a more vibrant and colorful aerial pallet. The different colors are created by the use of metal salts. The metal salts are packed into a firework as small pellets that are called “stars”. After a firework is ignited, the lift charge propels it into the sky. The lift charge is simply black powder that explodes within a confined space (tube) that shoots the firework upward as high as 1,000 feet. While the firework is being propelled into the sky, a time-delay fuse slowly burns within the firework’s shell. This fuse eventually reaches the center of the firework, or burst charge. This second charge is spherical, and surrounded by the “stars” which ignite and burn their respective colors outward from the center. A chart of the colors and associated chemical compounds of common aerial motor fireworks. 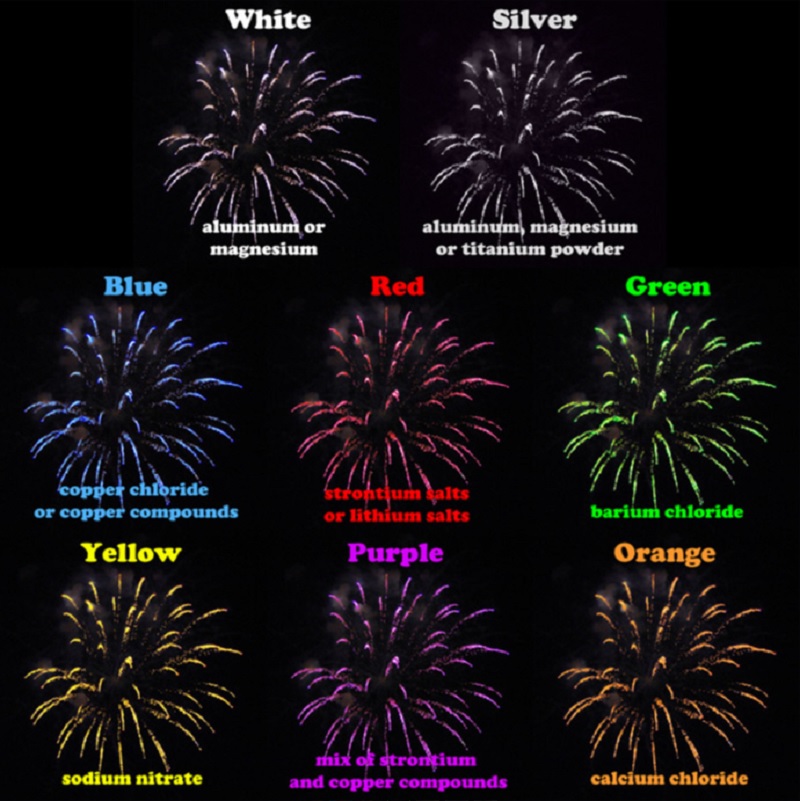 The chemical compounds that are responsible for colorful firework displays.

The joy of fireworks continued west into the new world, with Captain John Smith setting off the first display in the America's in 1608 in Jamestown. On July 3rd, 1776, one day before the Declaration of Independence was signed, John Adams wrote a letter to his wife that solidified the presence of fireworks on the United States of America’s birthday. He wrote, “This day will be the most memorable in the history of America,” he predicted. “I am apt to believe that it will be celebrated by succeeding generations as the greatest anniversary festival… It ought to be solemnized with pomp and parade… bonfires and illuminations (fireworks)… from one end of this continent to the other, from this time forward forevermore.”