Though we will have a few more chilly mornings, a gradual warming trend will begin for high temperatures. Decent rain chances will hold off until at least the end of the weekend.

The Next 24 Hours: Expect another clear, cool night with low temperatures in the low 40s. Wednesday will be a third consecutive of wall-to-wall sunshine. Afternoon high temperatures will sneak into the low 70s. Winds will be out of the east at 5-10mph.

After That: Most will embrace a continued quiet and seasonable weather pattern. Thursday will be sunny with morning readings in the mid to upper 40s followed by afternoon highs in the mid 70s. Into Friday, a few clouds could return to skies but the dry pattern will hold through Saturday. By Sunday, temperatures will be a good 5-10 degrees above average and enough moisture could be around for more clouds and a stray shower. A cold front will slide into the region on Monday with the next reasonable chance for rain.

Something to keep an eye on next week... an upper level trough of low pressure could take a path that is "suspect" to produce stormy weather--especially given the time of year. #LaWX #MsWX pic.twitter.com/b0LJMTyGyR

Just beyond the 7-Day Forecast forecast could be a system that needs our attention for better rain chances or even stronger thunderstorms. It is far too early to make projections about this with confidence, so that is just a timeframe to watch for now. CLICK HERE to view your complete 7-Day Forecast. 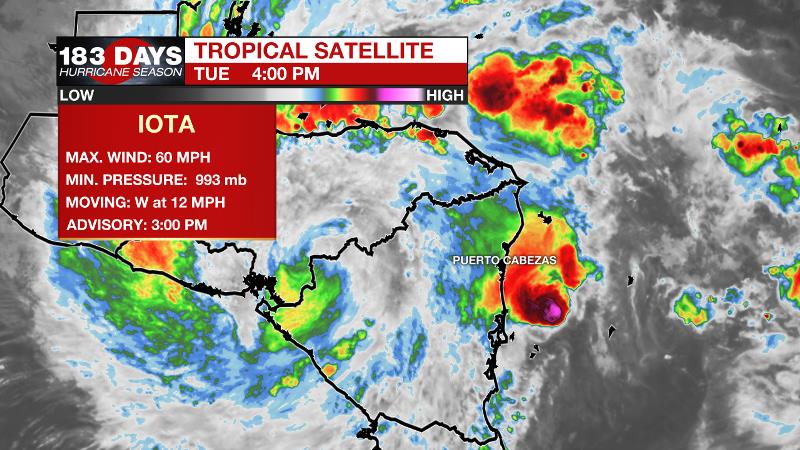 The Tropics: The threat of catastrophic flash flooding and mudslides continues across portions of Central America from Tropical Storm Iota. As of 4pm Tuesday, the system maximum sustained winds of 60mph and was moving due west at 12mph. Iota should degenerate to a remnant low by Wednesday.

A new area of low pressure could form in a couple of days over the central or southwestern Caribbean Sea. There is a 30 percent chance that a tropical depression could form by the end of the week.

The Explanation: A quiet weather pattern will continue as a surface high pressure system moves from the Mid-South to Mid-Atlantic. This “fair weather inducer” will maintain the recent conditions until Thursday or Friday. That is, expect mainly clear skies and temperatures at or slightly above average. The next upper level trough will cause a surface storm system to form over the weekend. Ahead of that, some warmer temperatures and clouds will return with perhaps just enough humidity to aid a coastal shower on Sunday. On Monday, the associated cold front will drag through the area and this feature may have enough uplift to tap whatever moisture is available to create a few showers. Forecast models hint that right after the frontal passage, a strong upper level trough will cut across the Gulf South. Depending on the timing, available moisture and position of any related surface features, this is the type of scenario that we could need to watch for more impactful weather. Since this is beyond the 7-Day Forecast, there is plenty of time to monitor.