Showers through midday, chilly night ahead

A cold front will bring some nice changes for the middle of the week. However, those will not last long.

Today and Tonight: Morning rain and thunderstorms will continue through about 11am. The early commute could certainly be hampered by some of this action. It previously looked as though clouds would quickly clear the area, but it now appears they may linger up until about dusk. High temperatures will stop in the mid 60s behind the cold front, possibly even falling a few degrees by late afternoon. Overnight lows will take considerable dip into the upper 30s with north winds of 5-10mph and clearing skies. 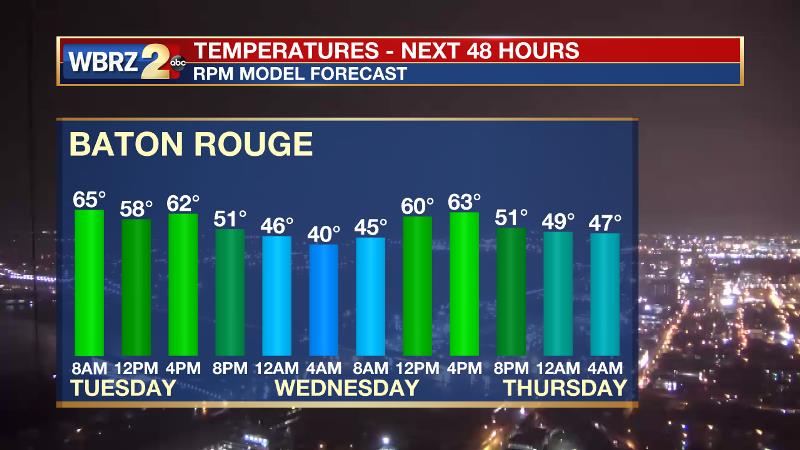 Up Next: After a chilly beginning, Wednesday should end up quite nice with a lot of sunshine and highs in the mid to upper 60s. Just like that, the chill will subside as southerly winds return milder air and clouds to end the week. Another cold front may bring some showers Thursday and Friday though nothing widespread is currently foreseen. The weekend forecast is tricky. While it looks mostly dry, a few fast moving fronts mean the possibility of a shower cannot be eliminated.

A shortwave trough and attendant cold front will swing through the Gulf Coast on Tuesday morning. A healthy soak may come with a half inch to an inch of rain falling before ending by midday. Behind this system, skies will clear from west to east around dusk. A surface high will build into the region allowing clear skies and northwest winds. Overnight, these conditions will result in low temperatures bottoming out in the 30s. With the surface on top of Louisiana, a good deal of sun is anticipated for Wednesday. The cool, quiet spell will not last long as the next upper level trough will move out of the Mountain West and into the Midwest on Thursday. Once again, the bulk of action with this event will stay north of the local area. However, briefly milder air, increased cloud cover and isolated showers are in store for the Thursday to Friday time period. The forecast beyond this, while low impact, is complex and challenging. The Weather Prediction Center depicts a series of fast-moving fronts moving through the region, but forecast model guidance is in poor agreement on whether or not these systems result in rain. While most of the time should be dry, those with outdoor plans should be aware that at least for now, a few passing showers seem plausible.