Keep hydrated and keep a cool place nearby this weekend. Heat is the weekend weather story.

Today and Tonight: Another mainly dry, hot afternoon is ahead. Expect thermometers to bubble into the mid to upper 90s by mid-afternoon.  With plenty of humidity in place, feels-like temperatures will reach into the low 100s. This time of year, a stray shower or thunderstorm cannot be ruled out but is unlikely. Overnight lows will be in the mid 70s.

An *AIR QUALITY ALERT* has been issued for the Baton Rouge area for Friday.  Light morning winds will reduce pollutant dispersion, and continued warm temperatures and sunny skies will enhance ozone formation. Therefore, air quality levels will be Unhealthy for Sensitive Groups in the Baton Rouge area. You can help mitigate this issue and reduce emissions by driving less and refueling very early or very late in the day. 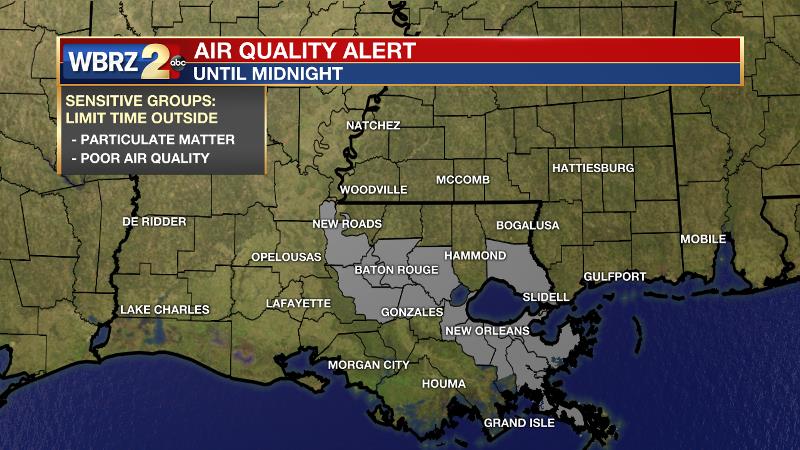 Up Next: A warmer atmosphere will encompass the central Gulf Coast through Sunday. Rain coverage will be at a minimum. High temperatures will be making it into the mid-90s, with some spots potentially reaching into the upper-90s. Heat index values will exceed 105 degrees for several hours each afternoon. High dew point temperatures will keep it stuffy overnight with low temperatures in the mid 70s. Showers and storm chances will bump up by Monday and some storms could produce gusty wind.

Something we see from time to time... a low may spin up along the tail end of a front next week (Barry? unlikely...). Either way, some heavy rain could result and at this time that appears most likely to happen over Florida/Georgia. pic.twitter.com/vVnb2mTADJ

The Mississippi River: At Baton Rouge, major flood stage continues with a level of 42’ as of Friday morning. Peaking at 44.1’ on March 19, the river set its 7th highest recorded crest at Baton Rouge. At 181 days, this year marks the longest period above flood stage at Baton Rouge. The level will slowly fall, but is likely to stay above flood stage for several weeks to come. The high water will remain an issue for river traffic and river islands, although some inundation will continue for unprotected low-lying areas. The city of Baton Rouge and the main LSU campus are protected by levees up to 47 feet. Some soggy areas and seepage may be noted due to the long duration of high water placing pressure on the levees. As some of the Mississippi River diverts into the Atchafalaya River, gauges at Krotz Springs and Morgan City will stay high as well. This creates backwater flooding in parts of Assumption Parish in areas such as Bayou Chene, Stephensville and around Lake Palourde.

An upper level ridge will build over the region through Saturday. Compressional warming will lead to some very warm temperatures while the sinking motions overcome convective development. Highs in the mid 90s are likely with upper 90s possible. Even though the atmosphere will dry out a bit, the surface certainly will not. With high dew points accompanying the warmer temperatures, heat indices will likely go well over 105 degrees for several hours. The National Weather Service may issue some heat bulletins—especially with many taking part in outdoor activities. A persistence forecast will be carried through the weekend. Some weakness in the mid-level ridge may penetrate from the east by early next week allowing just enough instability for some showers and thunderstorms to develop. Especially Monday, drier mid-level air will mean that any convective development will need to be monitored for strong, gusty winds.