The forecast for unsettled weather continues while timing out the specific rounds of rain and thunderstorms remains tricky. Regardless, the threat for flooding rain remains and some rivers will crest above flood stage.  Anywhere from 1 – 8” of rain has fallen since Thursday with the highest amounts focused around the I-10/12 corridor in the Baton Rouge area and the lowest amounts near the coast.

Some extended dry time is anticipated for early Saturday prior to scattered showers and thunderstorms filling in the radar picture this afternoon. Model guidance has been very poor through this event with regard to timing, but the next upper level disturbance that triggers development is expected to reach the area later Saturday. That is the window in which models show the next round of rain, so at least there is some agreement there. In addition to downpours, some of those thunderstorms could produce gusty wind as well. 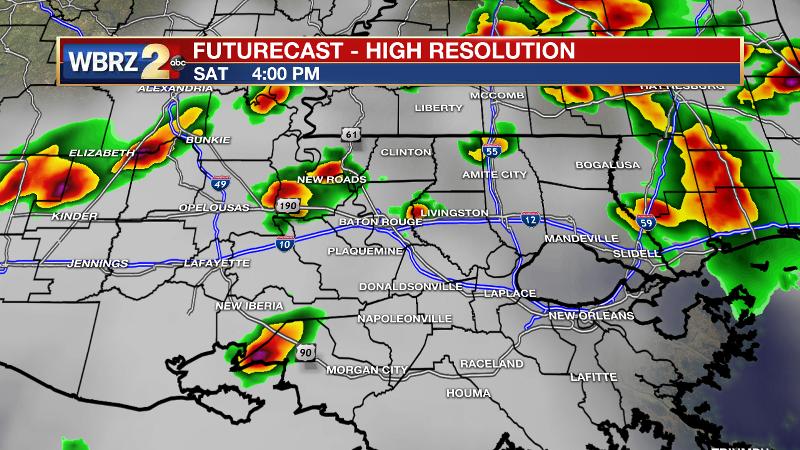 Another upper disturbance will move across the region late Saturday into Sunday with a scattering of showers and thunderstorms. The good news with this round though is that this disturbance should have enough push to send the nuisance stalled cold front creating this messy pattern, south into the Gulf of Mexico. Again, timing is not quite clear, but it seems possible that some sun and drier conditions may return for Mother’s Day Afternoon.

A FLASH FLOOD WATCH will stay in place through Sunday morning due to the possibility of downpours and the fact that many areas remain saturated from Thursday’s rainfall. River FLOOD WARNINGS are posted for the following areas (data as of 8am Saturday):