Plenty of sunshine to end the week

The rain is gone and the heat is on!

Today and Tonight: Afternoon highs will be near 92 degrees with heat index values near 105. Expect plenty of sun and very little rain. With all the leftover moisture from rain earlier in the week, a pop-up shower or two is not out of the question. Overnight temperatures will cool to near 77 degrees.

Up Next: A hot a dry pattern will continue for Friday and into the weekend. Friday high temperatures will be near 93 with a heat index between 105 109 degrees. Temperatures will increase little by little for the rest of the 7-day forecast. Hot and humid conditions will dominate for the weekend, Monday, and Tuesday. Air temperatures could be near 95 early next week. Overnight lows will remain in the mid-70s. 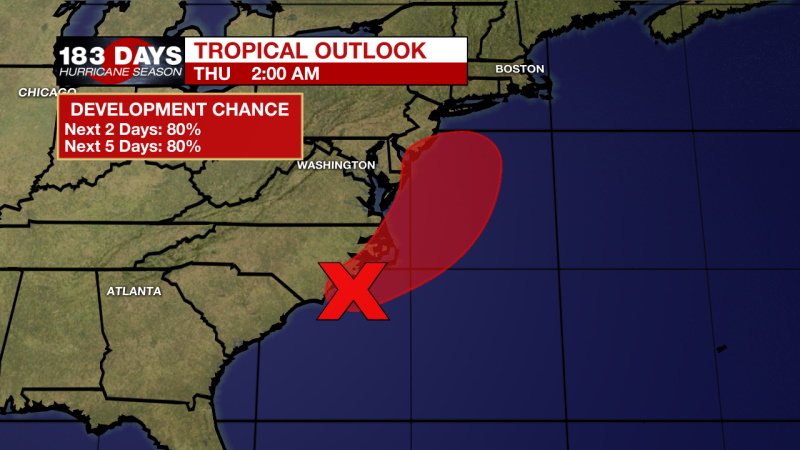 Surface observations along with satellite and radar data indicate that an area of low pressure located about 50 miles east of Wilmington, North Carolina, is gradually becoming better defined. The associated showers and thunderstorms are still disorganized, however, and are mostly confined to the east of the center. The low is expected to move northeastward or north-northeastward near or just offshore of the North Carolina Outer Banks later today and then along the mid-Atlantic coast tonight and Friday. Environmental conditions are expected to be conducive for development, and a tropical or subtropical cyclone will likely form later today or tonight.

Regardless of development, the system is expected to produce locally heavy rainfall that could cause some flash flooding across portions of eastern North Carolina, the coastal mid-Atlantic, and southern New England during the next few days. Gusty winds are also possible along the North Carolina Outer Banks today, and along the mid-Atlantic and southern New England coasts Friday and Saturday. Interests in these areas should monitor the progress of this system and refer to products from your local National Weather Service office. An Air Force Reserve Hurricane Hunter aircraft is scheduled to investigate this system later today, if necessary. Formation chance through 48 hours...high...80 percent. Formation chance through 5 days...high...80 percent.

A ridge that is currently over the 4 Corners is digging and expanding eastward toward us on Wednesday. This is increasing subsidence and bring dry air further east. Precipitable water values are slowly decreasing as dry air moves in. Rain chances and coverage are near zero for Thursday and Friday. 500 mb heights are also expected to increase. Temperatures will climb well into the 90s by the end of the week and stay that way through the weekend.