We are officially past the peak of the Atlantic hurricane season, but that does not mean we are done with the tropics.

In fact, some of the worst hurricanes to strike the United States have occurred in the month of October.

Two years ago this month, Hurricane Michael slammed the Florida panhandle as one of only four category 5 hurricanes to make landfall on United States territory. 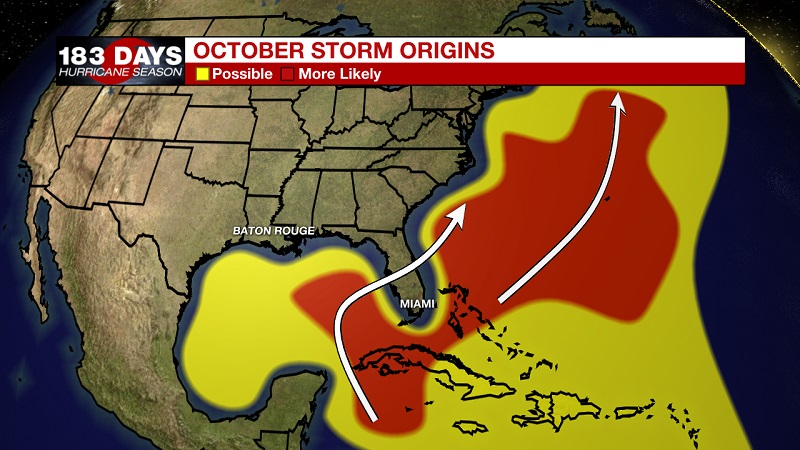 During the month of October, tropical systems typically develop a little closer to home - in the southern Gulf and northern Caribbean. The good news for Louisiana is that we usually begin to have stronger cold fronts moving down from the north, that tend to push any tropical developments eastward. However, that is not always the case. 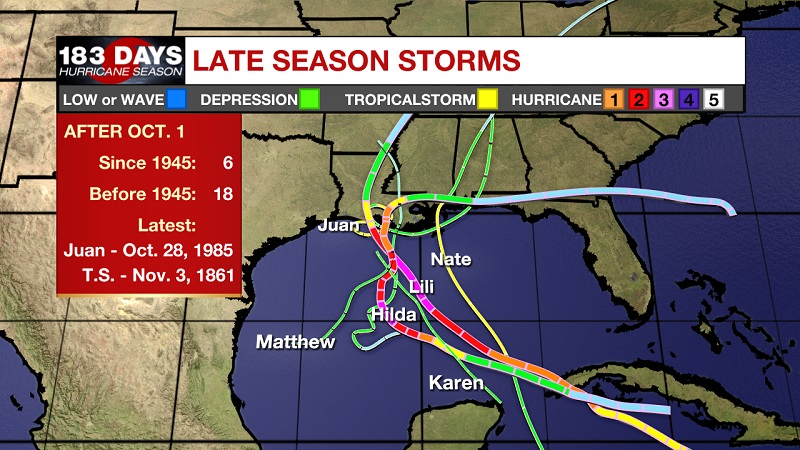 In Louisiana, records show we have had 11 hurricane landfalls in the month of October. The most recent being Hurricane Nate, which made landfall in Plaquemines Parish on October 8, 2017 as a fast moving category 1 storm.

Before Nate, Hurricane Lili was the most recent hurricane to impact Louisiana in October. Lili made landfall near Intracoastal City as a category 1 on October 3, 2002 with 90 mph winds. The storm was previously forecast to hit Louisiana as a major hurricane - wind shear and cooler waters just offshore caused weakening the morning of landfall.

Hurricane Juan 1985: The storm took an interesting track along the coastline, looping twice before moving away from Louisiana. Juan made landfall on October 29, 1985 near Morgan City with 74 mph winds. Flash flooding from heavy rainfall and storm surge were the main cause of damage from Hurricane Juan. Many locations across south Louisiana received over 10 inches of rainfall.

Hurricane Hilda 1964: Hilda was one of the most significant October storms for the state of Louisiana. Hilda reached max. intensity on October 2 as a category 4 storm with 140 mph winds. Hurricane Hilda weakened before landfall near Morgan City on October 3 with 100 mph winds, making it a category 2 hurricane. Hilda caused widespread wind damage across south Louisiana, damaging 98% of the state's sugar cane crops. The main cause of death in the state was due to an EF4 tornado that was spawned from Hilda's outer rain bands. The tornado tracked across Larose, Louisiana, killing 22 and injuring at least 165 others. Over 30 homes were destroyed.

Bottom line is, now is not the time to let your guard down just yet!