The 2020 hurricane season is on a record pace with nine named storms forming as of July 30, the most recorded since the satellite era began in 1966. On Thursday, NOAA’s lead hurricane season forecaster provided their annual mid-season update and projected 19-25 named storms, and 7-11 hurricanes 3-6 of which classified as major (category three or higher). The prediction update does include the storms that have already occurred. 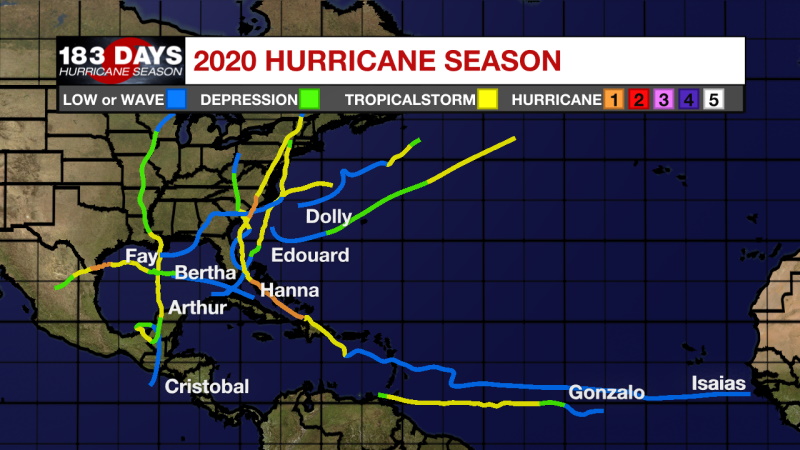 Forecasters cited warm waters, low wind shear and an active African monsoon. Atlantic sea surface temperatures are at their fourth warmest on record. Vertical wind shear, which aids tropical storm intensification, is at its second lowest on record. The West African monsoon season has been very busy and will continue to send numerous waves into the Atlantic Basin, which could potentially develop. Finally, it is unlikely that an El Niño pattern develops. The opposite pattern is known as La Niña, which favors much more activity in the Atlantic Basin during hurricane season. During La Niña, trade winds weaken over the Atlantic Ocean creating a supportive environment for tropical cyclone formation.

NOAA’s hurricane season outlook is for overall seasonal activity and is not a landfall forecast. Landfalls are largely determined by short-term weather patterns, which are only predictable within about a week of a storm potentially reaching a coastline. The National Hurricane Center and the WBRZ Weather Team remind that “it only takes one hurricane making landfall to make it an active season for you,” so prepare accordingly. For more on the season ahead and preparedness, visit wbrz.com/weather and click on the hurricane center.