Mild with showers prior to strong cold front Sunday

With only isolated showers expected to flare up through Saturday, exact timing and placement is a tough forecast. The good news is that neither of the next two days will turn into a washout.  Temperatures will stay above average until a potent cold front moves through late in the weekend.

Today and Tonight: There will be a considerable downturn in area wide precipitation on Friday. A stalled front may trigger an isolated shower, but most spots will stay dry. You might even find some sunshine. High temperatures will warm into the low and mid 70s. The Krewe of Southdowns should have cooperative weather as they roll at 7pm this evening. Overnight will bring clouds, fog and low temperatures in the low 60s. 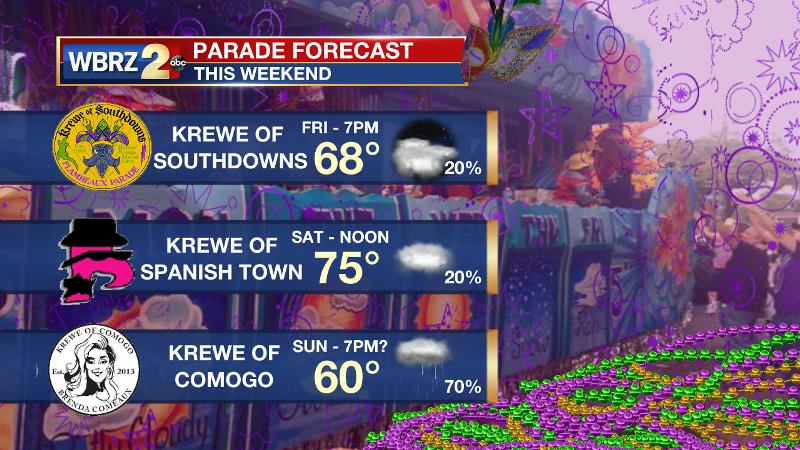 Up Next: Previously it looked as though a potent cold front would move in by Saturday night. Now, it seems that will hold off until Sunday. Still, isolated showers and thunderstorms will likely be around on Saturday, leaning toward afternoon for any activity on radar. With some luck, Spanish Town could dodge that action. Much of the day will be cloudy with temperatures in the 70s. By Sunday, a “flush out” cold front will finally push into the region with widespread rain and thunderstorms—especially in the afternoon and evening. 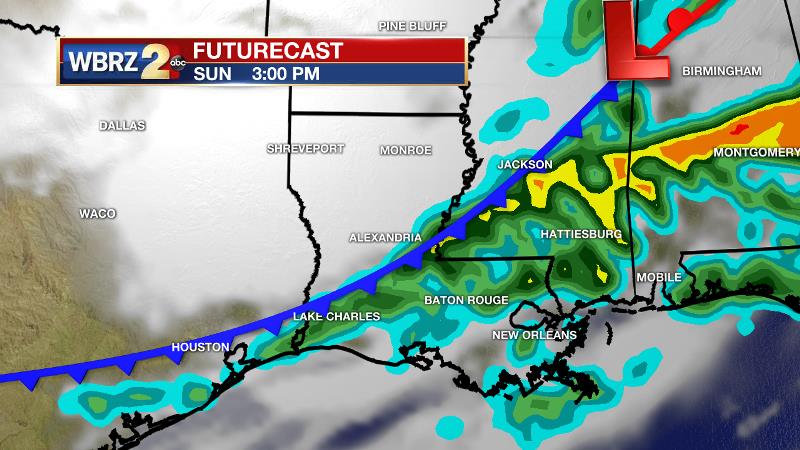 The Krewe of Comogo may have to consider some adjustments. Much cooler than average temperatures will follow with readings 10-15 degrees below average for Lundi Gras and Mardi Gras. If you got the growing season going, pay attention to temperatures Monday and Tuesday night as freezing is not out of the question. 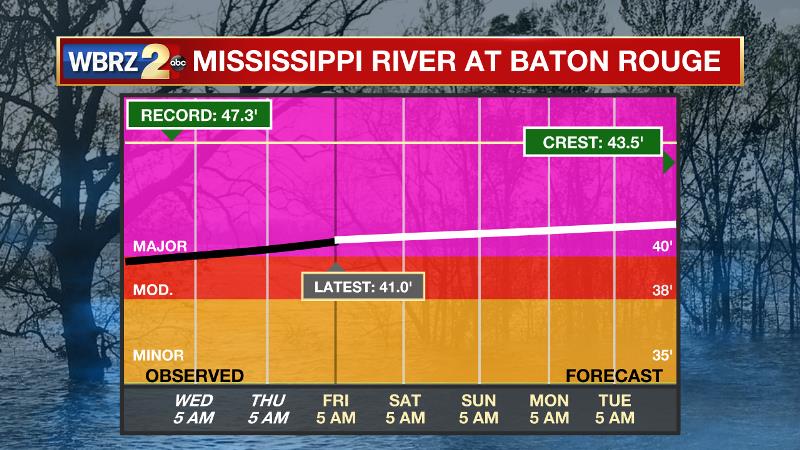 The Mississippi River: Major flood stage has been reached in Baton Rouge with a level of 41.0’ as of Friday morning. Though the classification of “major flood stage” sounds scary, impacts to land are minimal thanks to levee protection. The high water is primarily an issue for river traffic and river islands as well as a few spots north and south of Baton Rouge that will turn soggy along the banks. At this time, the river is projected to crest by late March at a level similar to what was reached last year around 44’.

A stalling cold front and mid-level dry air will turn rain chances down for the Baton Rouge area on Friday. As the front halts forward progress, there will be a tight temperature and dew point gradient between Baton Rouge and New Orleans and likely a tight precipitation gradient as well. Rain coverage will be much higher for New Orleans and the Louisiana Coast. The boundary will work back to the north as a warm front on Friday night and Saturday. For the first half of the weekend, a few showers may develop as Gulf moisture moves back onshore and high temperatures climb into the upper 70s. However, a lack of significant forcing should keep areal coverage low and long duration, heavy rain should not be an issue. Sunday’s weather looks much more impactful. A broad, longwave trough will move across the northern two thirds of the country sending a strong cold front toward the local area. Widespread rain and thunderstorms can be expected, currently timed for the second half of the day. Severe weather parameters suggest that gusty wind and hail will be possible out of any thunderstorms and this is reflected in the 2 out of 5 “slight risk” from the Storm Prediction Center. Following this front, much colder and quieter conditions are expected. Thermometers will drop nearly 40 degrees on Sunday night, into the upper 30s by Monday morning. Highs and lows will be 10-15 degrees below average through Wednesday with freezes possible Tuesday and Wednesday mornings, mainly north of I-12.