Tonight and Tomorrow: Spotty showers and a rogue storm is possible this evening until midnight, conditions will dry overnight as clouds break up as well. Temperatures will drop into the 70s around 11 PM, eventually reaching a low of 74° with light winds out of the west. A hot and sunny Sunday is in store, as temperatures will be warming into the 90s by noon. Light, isolated showers should develop along the coast around 11 AM, which will push inland after 2 PM. Rain will be brief and spotty, and linger until 7 PM. Temperatures will reach a high near 94°, with heat index values hovering near 102° during the peak afternoon hours. 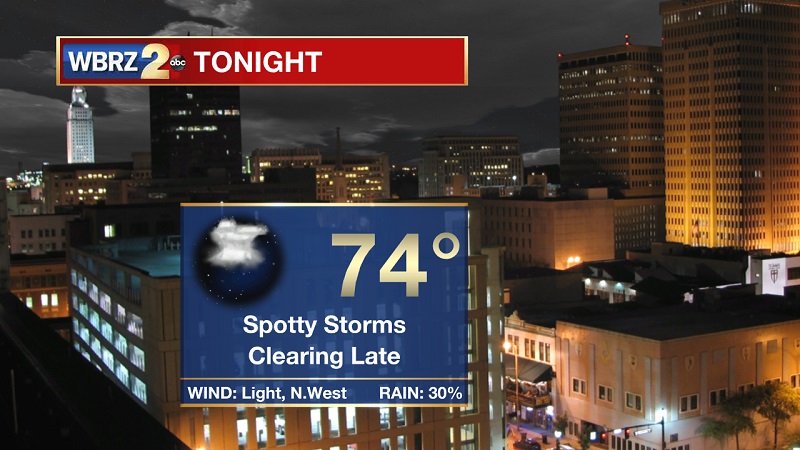 Up Next:  This pattern will stick around, with light, spotty, afternoon showers and storms through much of the week. The lack of clouds and rain will allow for above average high temperatures to stay in the low to mid 90s through the midweek. Showers and storms are to become more scattered as we approach the weekend, with temperatures returning back to normal for this time of year. 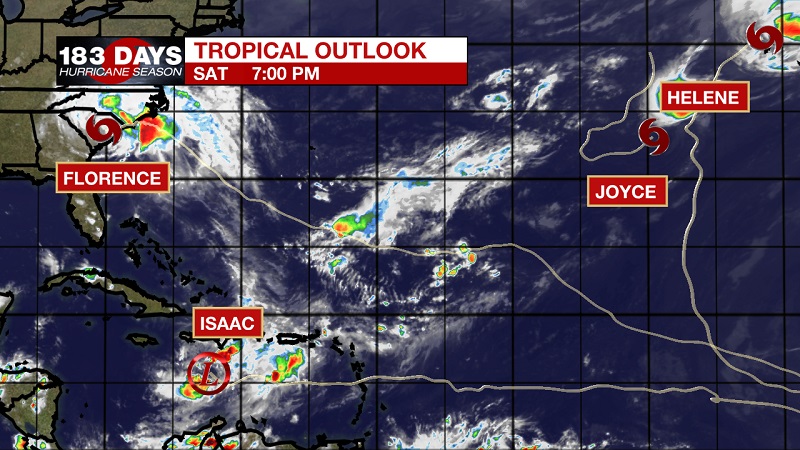 Tropical Storm Florence is continuing to drift through South Carolina and drop a devastating amount of rain. Flash flooding and major river flooding is occurring over most of the Carolinas. It is currently about 55 miles south-southwest of Florence, South Carolina, and about 40 miles east-southeast of Columbia, South Carolina. Florence currently has 40 mph sustained winds, and is moving very slowly at about 3 mph toward the west. A slow westward motion is expected to continue through tonight. A turn toward the west-northwest is expected on Sunday. Florence is forecast to turn northward through the Ohio Valley by Monday. Gradual weakening is forecast while Florence moves farther inland during the next couple of days, and it is expected to weaken to a tropical depression tonight or by Sunday morning. 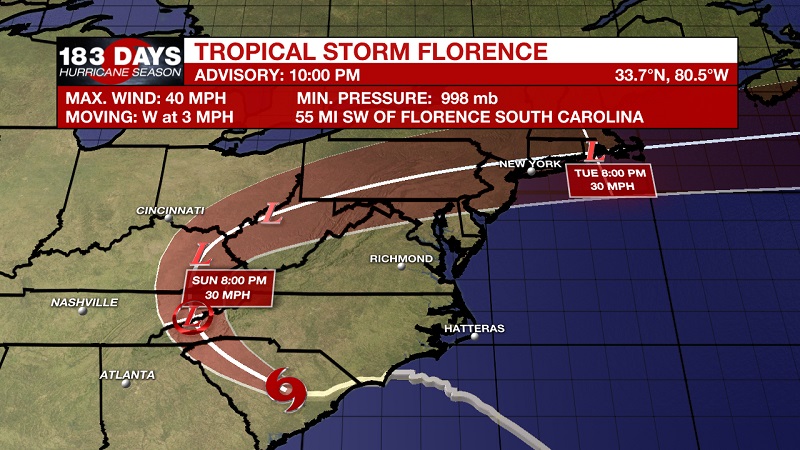 Tropical storm Joyce is about 695 miles west-southwest of the Azores, and moving east at 17 mph with sustained winds of 40 mph. This general motion is expected to continue for the next day or so. The storm should turn back to the east on Monday and to the southeast on Tuesday, away from the Azores.

Tropical Storm Helene is about 195 miles north-northwest of Faial Island in the Central Azores. She is moving toward the northeast at 25 mph, with sustained winds of 60 mph. This general motion is expected to continue with an increase in forward speed during the next couple of days. Helene should continue to move past the western Azores overnight and then approach Ireland and the United Kingdom Sunday night and Monday. Little change in strength is forecast through Monday, but Helene is expected to transition to an extratropical cyclone as it approaches Ireland and the United Kingdom.

We are also continuing to monitor a broad area of low pressure associated with the remnants of Isaac, which is located a couple of hundred miles southeast of Kingston, Jamaica. This low is accompanied by cloudiness and a few thunderstorms, and although the system shows some slight organization, it is heading westward toward a hostile environment for re-development. The National Hurricane Center is expected only a 20% chance of re-development into a tropical system over the next 5 days.

We are in between two relatively strong systems, Tropical Storm Florence to our northeast, and a tropical low to our southwest in Southern Texas. These two systems are struggling to bring us two different things. Florence is providing drier, northerly winds, and the low in Texas is bringing moist, southerly winds. This combination will help to keep showers and storms spotty, but there’s enough moisture to keep the humidity elevated and temperatures above average. These conditions will linger, as they will both systems will essentially move in tandem with each other, allowing for neither to take the upper hand to control our local weather pattern. They will both move northwest over the beginning part of the workweek, which will open the door to a weak upper level ridge to build across the area. This will also help to keep storms on the isolated end. This ridge will inevitably break down after Wednesday, which will cause more scattered storms to return to the Gulf States late in the week and into the weekend.